How noticeable is the gravitational pull of a mountain range?

A massive object like a planet exerts a great gravitational pull on nearby objects. This will cause them to accelerate towards the center of the planet with the same acceleration regardless of their mass, if we disregard other forces such as air resistance.

How does objects "connect"?

Mountain ranges are of great mass, and I assume they exert a gravitational pull of some degree. If you could theoretically "lift" this mountain range of the face of the planet by as little as 1 meter, would objects then get attracted to it enough for us to physically feel it? If not, would it help to place this mountain in space so that the pull of the earth wouldn't counteract the mountain effect?

The effect is noticeable even here on Earth, and in fact it has been used to measure the mean density of the Earth in experiments such as the Schiehallion experiment. 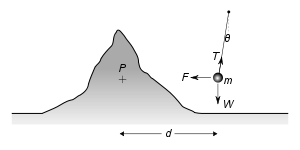 In space, the effect would of course be much greater because the predominant gravitational field of Earth wouldn't be there.

I was quite sloppy with my last sentence, as CuriousOne correctly pointed out. Here's what I meant:

If you took the mountain an infinite distance away from the planet (into deep space), the deflection would be entirely due to the mountain and you would of course have $\theta = \pi/2$ (the pendulum would point towards the mountain's center of gravity).

Not the answer you're looking for? Browse other questions tagged newtonian-gravity experimental-physics estimation geophysics or ask your own question.

8
How reliant is the Solar System on being exactly the way it is?
7
Terminal velocity of all falling objects is same?
2
Does the gravitational force of a massive, spherical body draw only towards its center of gravity, and to no other area?
2
Will this rope break due to the tidal forces or not?
0
Is gravitational acceleration truly independent of mass?
1
Is gravity really a force that occurs between composite “objects,” or is it individual atoms?
1
Is the Earth's gravitational force limited by the mass of the second object?