Light travelling from stars and galaxies takes some time to reach us here on Earth - when we observe stars or galaxies in the night sky, we see their positions as they were when the light left on its journey towards us, and not their current actual positions where they are located now.

Now the visible stars are located at a range of distances from us - from Proxima Centauri at 4.24 light years away, to V762 Cas in Cassiopeia at 16,308 light-years away.

So not only are we looking into the past, but more than that:

So here is my question:

Does anyone know of any resource that:

I've done quite a bit of searching, but all I can find are maps which show the night sky:

but nothing that would move each star individually according to:

EDIT: To add some clarity.

A computer simulation is what I am ideally looking for.

Preferably one that would do some sort of "time based animation" to show the relative movements of the individual stars, and showing the final positions of where they are currently actually located.

Most of those stars are within 1000 light years of he Earth. They have typical velocity dispersions with respect to the Earth of ${\sim} 10$ km/s, with the occasional rare star with a velocity of ${\sim} 100$ km/s. This translates into proper motion on the sky of milli-arcseconds to a few arcseconds per year.

Here is a plot of proper motion versus distance taken from the second version of the Hipparcos catalogue by van Leeuwen (2007). I selected 4022 stars with magnitudes brighter than 6, and with uncertainties in their proper motion of less than 1 milli-arcsecond/year and uncertainty in parallax of less than 20% (to ensure reasonably accurate distances and tangential motions). 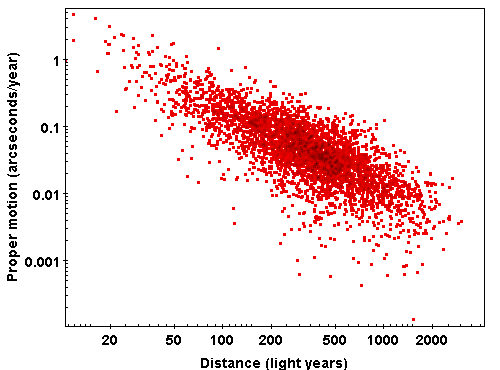 To estimate the size of the effect you are talking about, we need to multiply the proper motion by the distance (in light years) to work out how far the stars have moved whilst the light has travelled towards us. The plot below shows by how much a star's position would have shifted from where they would be conventionally plotted in a star chart as a function of stellar magnitude (brightest stars on the left). 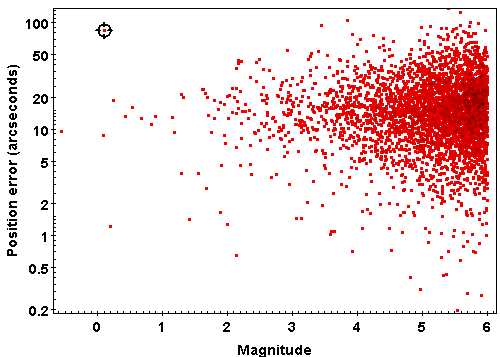 Now you could plot a star chart based on these numbers, but the typical deviations are less than 100 arcseconds, which is approximately the same angular resolution as the human eye. So in a revised star chart based on these numbers, which shows where the stars are now, there would be no perceptible difference in the appearance of the constellations.

I have highlighted one outlier in the plot. This is Arcturus, a bright red giant, in the constellation of Bootes (easily found in the night sky). It is at a distance of 37 light years, and in 37 years it moves 83 arcseconds in the night sky.

An issue that does come into play, and I'm not sure what the "rules" of the question are, is the precession of the Earth. This has the effect of changing the positions of stars with respect to our coordinate system (though not with each other). The equinox precesses at around 50 arcseconds per year, so if star maps are plotted on a fixed RA and Dec grid then this is a massive effect compared to what I have described above. This could be calculated, but it feels like cheating because it isn't reflective of any true change in the positions of the stars, just their positions with respect to our coordinate system.

Not the answer you're looking for? Browse other questions tagged soft-question astronomy resource-recommendations stars or ask your own question.

8
Solar system, visible stars and deep sky objects
2
How much of sky can be seen on a typical night from a mid-latitude location?
6
What is the orbital path of Omega Centauri?
10
Of the 9096 visible stars -- 90% are how close?
3
What is this big, white, dense, circular collection of stars in this picture taken from a Telescope? (See the image)
2
Why does a light wave fade as it travels through space?
7
Is the observable universe equivalent to 'our' light cone?
0
How are the relative distances of celestial objects from the Earth calculated using observations at a single time instant?