About time and time dilation [closed]

This question is related to this answer of John Rennie.

I guess his meaning of red line is the space-time distance traveled by the same particle between points (space-time states) A and B. It makes sense.

note that we can’t just add time to distance because they have different units - seconds and metres - so we multiply time by the speed of light $c$ so the product $ct$ has units of metres.

But I guess his true reason of that formula is the results of the experiments not units difference.

I think because we want our physics matches with the results of the experiments. But, there are some problems here:

3.2. Assuming we must improve the physics, why should we change the definition of an undefined concept? (As far as I know, time is an undefined concept like point in geometry.) Why do we not change definitions those are defined by ourselves like velocity, kinetic energy, etc.? I think talking about time dilation is completely similar to talking about size of points on the plane. It is similar to that we say some points on the plane are bigger than the others! 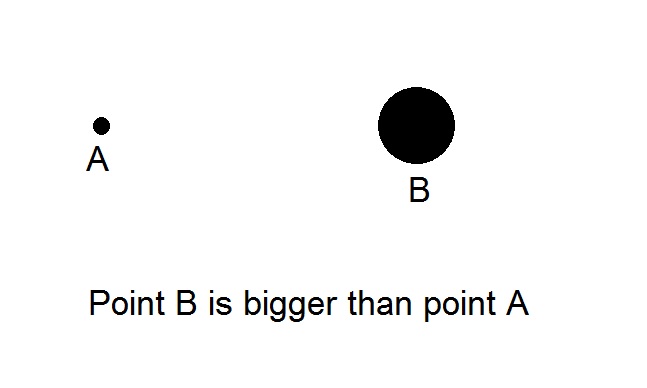 Maybe it is true (maybe some points are bigger than the others in fact) but I think we cannot discover it because we don't know what point is (it is an undefined concept). As far as I remember, I have learnt that we have some undefined concepts and we define other concepts by getting help of them but we never can define them because if we could, they weren't called undefined. Can someone please define point for me? If he/she can, I will prove that there is no time dilation!

Note that this is not a definition for point: "A plane is created by points" because I will immediately ask "What is the plane?" And so on.

The difference between what you wrote and what John Rennie wrote is that the latter is the verifiable foundation of modern science that has been verified in all the experiments and agrees with everything that people have ever observed, while your changes disagree with the experiments that may be done in these conditions – speeds close to the speed of light.

You sound confused but it cannot be otherwise - you are trying to make sense of the absurd consequences of Einstein's 1905 false constant-speed-of-light postulate. I am not going to continue (gatekeepers will delete my answer anyway) - just to note that Motl's "Newton's theory of motion was ruled out by the Morley-Michelson experiment" is both silly and wrong. The experiment CONFIRMED Newton's emission theory of light:

http://philsci-archive.pitt.edu/1743/2/Norton.pdf John Norton: "In addition to his work as editor of the Einstein papers in finding source material, Stachel assembled the many small clues that reveal Einstein's serious consideration of an emission theory of light; and he gave us the crucial insight that Einstein regarded the Michelson-Morley experiment as evidence for the principle of relativity, whereas later writers almost universally use it as support for the light postulate of special relativity. Even today, this point needs emphasis. The Michelson-Morley experiment is fully compatible with an emission theory of light that contradicts the light postulate."

Yes, note the minus sign, and see Einstein's derivation.

I think this (they have different units) is not a good reason. Because he is talking about fundamental basic concept of the physics. He could easily say that "so, we discovered that our understanding about space and time was wrong and now we have space-time with four new coordinates $(t,x,y,z)$ and the unit of them are the new unit (for example) we name it $\mathrm {st}$. $\mathrm {st}$ is a new unit not meter nor second and after now meter and second are meaningless".

You're right. Because what we're really dealing with isn't length or time, it's motion. We define our second and our metre using the motion of light.

You missed the minus sign out. That apart the expression is correct, but it's only really a restatement of Pythagoras's theorem. See the simple inference of time dilation on Wikipedia.

Why does he use the speed of light $c$ in that formula? Is this obtained from his strong (at least I think that principle is very strong) principle (The length of the red line is the same in both figure 1 and figure 2)?

The speed of light is in the expression because "A light-signal, which is proceeding along the positive axis of x, is transmitted according to the equation x = ct". See Einstein's derivation.

How are we sure that what we measure in the experiments, is the same thing that we want to (or we must) measure?

Because of pair production and electron diffraction and the wave nature of matter. Hence matter behaves like the light between the parallel mirrors.

It isn't. See what I said about it here. As Einstein said, time is what clocks measure. And if you take a look at what a clock actually does, if you open up a clock and take a cold scientific look at the empirical evidence, you will see cogs turning or a crystal oscillating. You will see that the clock features some kind of regular cyclical motion along with something like gears or a counting device, and it gives some kind of cumulative display of the thing we call "the time". It's that simple.

Not the answer you're looking for? Browse other questions tagged spacetime time time-dilation laws-of-physics or ask your own question.

93
What is time, does it flow, and if so what defines its direction?
79
What is time dilation really?
25
Why are objects at rest in motion through spacetime at the speed of light?