When you see graphics trying to help people visualize what gravity in Einstein's relativity "looks" like it will often be a mostly two-dimensional plane with a concave warp where a massive object is sitting as if gravity were a piece of stretchy fabric (I'm sure you know what I'm talking about). We know for a fact that gravity is not like this and I'd like to know what gravity would actually "look" like. It is of course possible that gravity transverses higher dimensions in which case I'd like information on that too.

I've included a couple of pictures that are a three-dimensional warping of spacetime. Obviously, these are artist's and mathematician's depictions, but perhaps they'll give you a better idea. 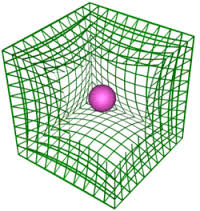 This is supposed to be showing the gravity of two astronomical bodies interacting. Admittedly, this seems to be the most fanciful looking image, but it is a very interesting way to show it happening. The yellow/white lines that are emanating out from each object show that object's affect on spacetime. 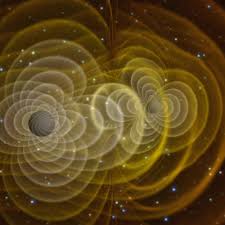 This image shows the Earth warping spacetime like in the first image. It's a little clearer from a side view. Earth is distorting the miniature cubes within the grid. 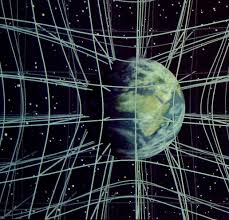 Visualization is a very personal thing and you must choose what works for you. Analogies can be good, bad but never wrong and science has always used analogies heavily to take its first steps into any field. In summary you need to ask:

Is a visualization helpful or useful?

and, in GTR, I'm strongly of the opinion that all everyday visualizations like balls on rubber sheets are not wrong but highly debilitating. Quite simply, they hold you back and hinder your intellectual progress. If you keep thinking in terms of visual pictures, you cannot progress beyond those pictures, and general relativity deals with geometric concepts and properties of spacetime which we never meet in our everyday life nor have we met them the world that shaped our way of thinking during our evolutionary history.

The main object for "visualizing gravity" is the curvature tensor. The name curvature is a little unfortunate in GR because it suggests rubber sheets and the like. It's true that it corresponds strongly with our everyday notion of curvature in one and two dimensional objects (such as a circle or a balloon, respectively) but it does so in a way that it can be generalized to higher dimensions. The curvature tensor measures how a vector changes when you transport it around a loop by so-called parallel transport. This means that you think of your loop as being made of piecewise geodesics (straightest possible lines) and, as you follow them, you keep your test vector at a constant angle to the geodesics. As you turn onto the next piecewise geodesic at a vertex of the polygon you use to approximate your loop, you keep the test vector in the same direction. Try this on a flat sheet of paper, and the vector comes around the loop with no change in direction. Do this on the surface of the Earth and there is a change in direction. Try it: Imagine being on the equator, with your vector pointing south. You move along the equator such that the arc you travel subtends some angle $\theta$ at the Earth's center. Now turn North, but keep your vector in the same direction - so it now points directly behind you. Now travel on a constant longitude great circle to the North pole, and turn back through the angle $\theta$ so that you aim for your beginning point along the constant longitude line. Now go back to the beginning, and you find that your vector has rotated through an angle $\theta$ in being parallel transported around the loop. Moreover, you can convert this rotation to the everyday notion of curvature: the radius of curvature $R$ is given by $R = \sqrt{\frac{A}{\theta}}$ where $\theta$ is the angle of rotation owing to parallel transport around a loop and $A$ is the area enclosed by the loop. On the flat sheet of paper it becomes infinite. Interestingly it is also infinite for a cone or circular cylinder, which means these surfaces can be developed, they have no intrinsic curvature. Draw geometric objects on the developed surface, then roll the surface back up into the cylinder / cone and your pictures will undergo isometries - lengths and angles are not distorted. A sphere, on the other hand, cannot be developed.

This notion of change wrought by parallel transport, unlike the everyday notion (which is equivalent for two dimensional curved objects), can be generalized to higher dimensions. In general the curvature is a matrix valued billinear function of two vectors. You define a small parallelogram by two vectors (that name its sides) $X$ and $Y$ and then the matrix valued function $R(X,\,Y)$ spits out a matrix $R$ that tells you how a third vector $Z$ is transformed by parallel transport around the loop. In symbols: $Z^\prime - Z = R(X,\,Y)\,Z$, where $Z$ and $Z^\prime$ are the vector before and after transport. On the two dimensional Earth's surface, a lone rotation angle and simple $2\times 2$ rotation matrix defines this change; indeed the matrix valued function can be written:

where $\det((X,\,Y))$ is the determinant of the matrix with $X$ and $Y$ as its columns. This is an infinitessimal rotation through an angle given by the area of the small loop divided by the squared radius of curvature.

In four dimensional spacetime, $R(X,\,Y)$ is no longer a simple infinitessimal rotation, but a infinitessimal Lorentz transformation acting on a four-dimensional vector in the spacetime manifold's tangent space, so the picture is considerably more messy and complicated. But the basic idea is exactly the same.

Curvature tensors let us compute measurable quantities such as the sum of angles in triangles (which sum up to less than half a turn in negatively curved space) and volumes enclosed by spheres of a given surface area / radius (which differ from their Euclidean values by amounts that become larger as the curvature / gravity is stronger).

In GTR, if you want to think intuitively, you need to do so in purely experimental / measurement terms: what would this triangle's angles sum to, what surface area would this sphere have, what would this observer's accelerometer / clock read? There are many graphical representations of the mathematics that describes general relativity. One of the best books around in this respect, in my opinion, is:

There are a huge number of pictures, all lovingly and painstakingly drawn, for many different concepts.

Spacetime is four dimensional (three spatial dimensions and time) and hence so is gravity (as obtained from the metric tensor of spacetime) and we just can't visualize 4D spaces (much less spacetime!) so the best you can do is either

Yes, I also never liked the visualization with the 2D-plane and the ball. It is not even partially true. I think there is no possible way to visualize the mathematical and physical effects, because its mathematical formulation is so complicated that you wont ever have a 100% true visualization.

But maybe this picture of a parralel transport of a vector on a manifold makes the mathematics behind it a bit more palpable.

Not the answer you're looking for? Browse other questions tagged general-relativity gravity spacetime curvature visualization or ask your own question.

9
Visualizing gravity in 3D
17
Why do we talk of the "weakness of gravity" rather than "the surprising charge to mass ratio of particles"?
2
Questions about how the curvature of universe is described with a single number
4
Why does gravity cause time dilation?
3
Why was pseudo-Euclidean geometry not enough for general relativity?
7
Visualizing wormholes without embedding spacetime