How do we determine the mass of a black hole?

Since by definition we cannot observe black holes directly, how do astronomers determine the mass of a black hole?

What observational techniques are there that would allow us to determine a black hole's mass?

You can work out the mass of a central gravitating body in a manner somewhat similar to Cameron's answer, but it's a little more complicated. For situations where one object is much more massive than the other:

where $G$ is a universal constant, $M$ is the central mass, $m$ is the orbiting mass, and $r$ is the distance between them.

From Newtonian mechanics, we know that the force required to keep an object traveling in a circular path (AKA centripetal force) is

where $m$ is the orbiting mass again, $v$ is its velocity, and $r$ is the radius of the circle.

All the letters in the two scenarios match up, and since gravity is the centripetal force, let's just set them equal:

Rearrange and we get

Now if we want to compare the Sun and Earth to the black hole and its satellite,

Instead of using Newtonian mechanics, Kepler's third law is more often used to determine the mass of two objects orbiting each other. It uses quantities that are more easily measurable and can be used no matter the ratio of the masses of the two observed objects.

Kepler's Third Law (generalized from his original work) says that the sum of the masses of two objects orbiting each other is proportional to the the cube of the semi-major axis of the orbit (think radius) divided by the square of the period. M+m (is proportional to) SMA^3/P^2 Doing a proportional reasoning problem with the figures for the Earth and Sun (sum of masses = 1 solar mass, period is one Earth-year, SMA is 1 AU) gives the result

[EDIT: How to actually get that information-

There are lots of analysis techniques to try to extract semi-major axis and period information from observations.

The simplest case is nearby binary stars, which we can literally see orbit each other, so we can measure those things directly.

Exoplanets are mostly invisible against the glare of their parent stars, so they are mostly detected by the wobble they cause in the star's image as they orbit. The details of that wobble signal provide a wealth of information, some of which can be used to extract period and SMA.

For dense objects like neutron stars orbiting each other, Einstein's theory of General Relativity dictates that they will emit gravitational radiation, or ripples in spacetime. This causes them to lose energy, which makes them slow down. Accurate timing of the lighthouse-like pulses of radiation we receive from them can also yield what we need.

Finally, black holes, especially large ones, have a dramatic effect on their environments. Many have a disk of material spiraling into them. The material heats up to extreme temperatures and emits lots of radiation, allowing us to observe it. Models of the material disks' behavior depend on the mass of the central black hole, so matching a model with observations will give an estimate of the mass.]

There are numerous ways to estimate the mass of a black hole; I will just discuss the most common methods.

For stellar-sized black holes, the primary method is to find them in binary systems and measure the motion of the companion object - usually a "normal" star.

By measuring the radial velocity amplitude $K_2$ and orbital period of (what is conventionally known as) the secondary star, we can construct the binary mass function, which is a relationship between the masses of the components, $M_2$ and $M_{\rm BH}$, the (generally unknown) orbital inclination to the line of sight, $i$ (where $i=90^{\circ}$ is edge-on), and the observables. $$f_{\rm BH} = \frac{(M_{\rm BH} \sin i)^3}{(M_{\rm BH} + M_{2})^{2}} = \frac{P_{\rm orb} K_2^3}{2\pi G}\tag1$$ These measurements are not without difficulties, since the light from the visible companion may be overwhelmed by light coming from an accretion disk of material spiralling in towards the black hole. This is in fact how many of these systems are discovered.

If the above information is all that is available then only a lower limit to the black hole mass can be found, by inserting $\sin i =1$ and $M_2 =0$ into equation (1) (or use some other sensible lower limit to $M_2$).

Information on the inclination can come from X-ray binary systems where the accretion disk around the black holes emit X-rays that are eclipsed by the secondary. In these cases, we know the inclination is high, and careful modelling can yield a precise value. This together with a good estimate of $M_2$ leads to an estimate of $M_{\rm BH}$.

For supermassive black holes there are also a number of techniques. The most important an accurate are probably the direct modelling of the motions of resolved stars that are in orbit near the black hole. This has only been achieved for the black hole at the centre of our own Galaxy, but is a spectacular success for adaptive optics in a very crowded field. See for example Ghez et al. (1998); Gillesen et al. (2017). These measurements are now sufficiently accurate to even see the effects of General Relativity rather than Newtonian gravity on the orbital motion (e.g. Parsa et al. 2017).

For more distant galaxies, individual stars cannot be resolved, but one can still use the motion of gas or the overall velocity dispersion of stars near the centres of galaxies to estimate the mass of the central object. A classic example would be the motion of gas in the accretion disc of the active galaxy M87. The picture below shows measurements of the gas velocity across the centre of the galaxy (the scale is about 100 pc across). The lines show models of a Keplerian disc orbiting a central massive object (from Macchetto et al. 1997). 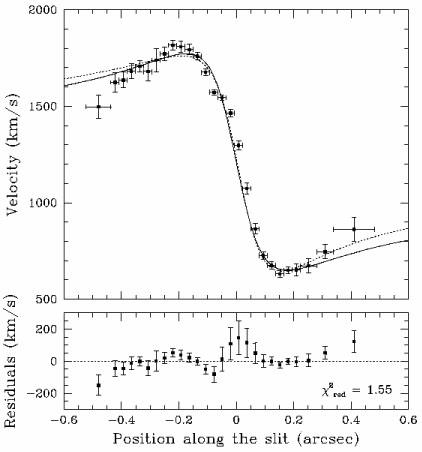 The detection of gravitational waves has led to a new way of measuring black hole masses in close, merging binary systems. The two black holes (the only examples so far are BH-BH binary systems) in a close orbit lose energy via the emission of gravitational waves and spiral into a merger at a rate which is highly dependent on both the product and sum of their masses (see for example here). The waves are emitted at twice the orbital frequency.

A detailed modelling of the gravitational wave signal - the time evolution of the frequency and amplitude is able to yield the masses of both inspiralling components - e.g. Abbott et al. (2016).

To do this we would first find a mass such as our Sun and the Earth. We know that the Earth is 149,597,900 km, or about 150 megameters from the Sun, (so this is its orbital radius) and so simply by using pi we can work out how fast it is moving around the Sun. To find the orbital circumfrance we just do

Because the star around the black hole has the same distance from us to the Sun, we now know how to work out how much mass it has compared to the sun. To begin with, we know that it is orbiting around 6.7 times faster (100/14.9) and it is the same distance away. This means that it must have a mass 6.7 times greater than the mass of the Sun. The Sun's mass is 1.98892 * 10^30 kg so if we just times this by 6.7 we can find the mass of our black hole:

13
Why are binary objects so critical to astronomy?
0
Black holes and singularities
0
How do I calculate mass of an object knowing velocity and acceleration of it's orbiting object using general relativty?

3
How much energy is released by an evaporating black hole in the last second of its life?
0
Black hole mass
7
Primordial black hole vs. black hole