How Quickly Do Gases Mix?

When I pick up my scuba tanks from the dive shop, I measure the nitrogen and oxygen levels in it. I check that they are close to what I specified and calculate the maximum depth it's safe to go to to ensure acute oxygen toxicity is not an issue. I also need to know the gas mix so that when I do the dive I can accurately calculate my decompression obligations (or try to avoid having any at all.) One is taught to not measure the mix too soon after the tank is filled to ensure they have mixed thoroughly.

When I was a kid I was taught that the temperature of a gas was a measure of the average speed of the molecules and that the speeds of the molecules in the gas would be normally distributed about the mean speed, some moving very slowly and some very fast. I had always imagined the average speed to be quite zippy and that a mix of gasses would be pretty evenly mixed quite quickly.

So my question is, if one added to 8 litres of nitrogen 2 litres of oxygen, how quickly would the mixture be thoroughly mixed? At least mixed enough that any measurement would be the same to within .1 % throughout the cylinder. (That's a tenth of one percent.) 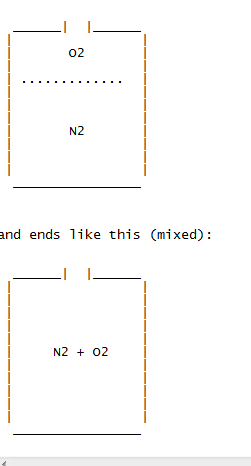 I have no idea how to calculate this.

This is all about diffusion. The speed of individual molecules is not relevant, because they collide with one another and change direction so frequently (at least at standard temperature and pressure) that this speed does not at all characterize the diffusion of one species into another.

Engineers have tabulated rate coefficients that describe the rate of diffusion of various gases through air, for example: https://www.engineeringtoolbox.com/air-diffusion-coefficient-gas-mixture-temperature-d_2010.html

This doesn't give the rate you'd want, but we can get the ballpark studying a similar rate, Argon diffusing through air.

Say you've got a can with Argon on the bottom, air on top, and a 1 cm mixed layer between otherwise pure gases.

This is the mass flux of argon through the barrier. Multiply by some area A, Divide by argon density at STP (1.7 kg/m^3), and divide by A again to get argon flow per unit area, areas cancel and we have: = 1.89 cm/s. Note that the Argon mass actually canceled out here too, basically the mix rate just relates to how thick the boundary layer starts out. Initially, when it is infinitesimal, the rate is infinite, since the rate is just D=0.189 cm^2/s divided by the boundary layer thickness L, which I assumed to start at 1 cm.

This means that the pure argon below diffuses up into the pure air through the boundary at like 2 cm/s. Of course one second later the boundary layer is 3 cm thick instead of 1, so the rate slows 3x. Three seconds later it is five centimeters thick. You have to solve a differential equation to really get your answer of how long, and the notion of a firm boundary between pure and boundary layer is just an approximation. But roughly... continuing this pattern you hit 21 cm thick "boundary layer" after 100 seconds, which I'm guessing is close to your tank size. Double or triple that for the boundary layer to further mix up to your .1% requirement, and we're at 5 minutes.

Notably, given this surprisingly slow timescale, it probably does help to shake up the tank. I suspect that Argon is a slightly worse case than N2 and O2, but I don't really know. Comparing other gases on the engineering toolbox link, seems like D roughly goes with mass, lighter mass higher D, but Argon isn't very different from air anyway (40 v 29).

Not the answer you're looking for? Browse other questions tagged thermodynamics ideal-gas kinetic-theory or ask your own question.

3
How fast do molecules move in objects?

4
Does the kinetic theory of gases means gases mix almost instantaneously?
6
Speed of sound of a gas mixture
9
Why is it difficult to mix helium and nitrogen gases?
0
Can the energy/power required to mix two fluids together be calculated?
1
Approximating Gas Density
1
Do gases mix faster when of unequal temperature?
2
Confusion while deriving kinetic-molecular theory of gases
1
What formula can serve as an approximate estimate of the time taken for the smell of a perfume to reach somebody?