In which-pattern does the individual-particles move in a longitudinal wave?

Transverse waves, such as upper-surface of pond-water, or in shaking-rope; the Transverse-Wave can be easily understood and drawn (for different times such as at t second, t + 0.25 second, t+0.5 second (for-say) ), where, each particle can move in both direction (UP and DOWN) from its original position.

(1) in case of Longitudinal-waves; does a point (of medium) move in 2 ways (FORWARD AND BACKWARD) with-respect to its ORIGINAL POSITION ?

The spring waves are fast, and not clear, and also could-not be well-remembered (for me) the actual spatial-position of each individual turns, so I could't compare the conditions t1, t2, t3, etc. so, cant understand movement of individual-particle. Just the overall movement of compressions and rarifications could be well-watched

(From this animation of wikipedia, it seems to me that the particles go to forward direction and comes-back to the original position, but not seem to go further backward from original position )

(2) How to draw (on notebook) the different steps of longitudinal-waves with respect to time? How to draw that, if the particle really move in both-direction from original position. In different textbooks, images are given, with vertical-bars or hemicircles, such as:

I've solved this just as a guess, but requires a verification. 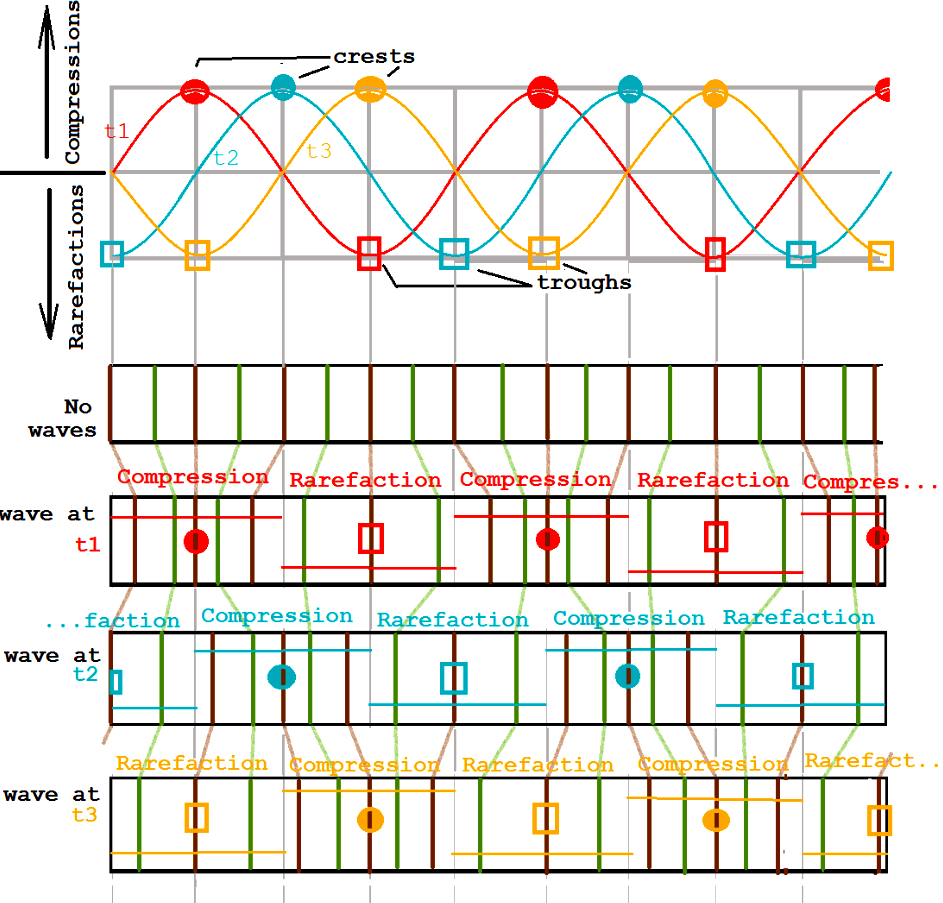 The upper diagram is a sine type graphical representation. The lower diagram is actual longitudinal wave. The colors indicate 3 separate timely-position (t1, t2, t3 ; respectively which are towards future). The thick dots indicate a crest, and box-sign indicate a trough.

Before rendering in this way, every time I was assuming that, the original position of layers (neutral-point) (node?) in the sine-graph would be comparable with the layer on actual wave that shows no shift from its original position. (Just similar to transverse wave on rope).

that gave me a cumbersome drawing each time.

Then it seemed to me, the sine-graph is only applicable for pressure and it is is not applicable on shift of layers. It seemed to me, if from the zones of rarification some layers go-out (from both sides), and to the zones of compression if some layer comes-in from both-side, on the intermediate portion (the original position or neutral points) (nodes?) of the sine-curve, there would shift of layer from original position. Rather, the layer on the centre of rarification (considered as trough here) and the layer at centre of compression (considered as crest here), would stay at their original positions.

Think of it this way: If the displacement occurs only between "neutral" and "forward", then the average density (air molecules per volume, or spring coils per length) over the entire system (air chamber or spring) must increase. But this is not possible! We have a fixed number of molecules and a fixed number of coils of spring, so we cannot increase the average density.

In order to satisfy the condition that we do not add any more molecules or spring coils (closed system) we must have it that the displacement goes both "forward" and "backwards".

Not the answer you're looking for? Browse other questions tagged waves acoustics harmonics or ask your own question.

13
Why there is a $180^{\circ}$ phase shift for a transverse wave and no phase shift for a longitudinal waves upon reflection from a rigid wall?
10
How can radiation be a transverse wave? Does light really resemble a rope? How can a 3D field be a medium for non-spatial 1D waves? Need mental model
6
Can transverse sound waves be polarized?
1
Speed of Medium Compared to Wave Speed
3
Longitudinal Wave meets Transverse
1
Intuition for Sound Waves
0
What do "elastic property" and "inertial property" mean in this passage about the speed of sound in elastic media?
3
How to understand that transverse tension in a wave travelling on a string is maximum on the equilibrium point, instead of the extremes?