Why do rope walkers always carry a long stick with them?

I saw in the film (based on a true story) "The walk" a guy who tried (and succeeded) to go from one high building to another via a rope. He even succeeded in going from one the (then still existing) two Twin Towers to the other and the other way round. He carried with him this long stick. You´ll probably all know what I mean.

Why gives this more stability? Has the flexibility of the stick something to do with it? I can imagine that with a stiff rod it's much harder to do.

Flexibility plays no role, because the rod can be naturally bent.

If the walker has no rod and his CoM is not aligned to the rope he hasn't a big chance of adjusting it.

A rod contributes to the mass of the system (and the position of CoM) and distribute mass on a greater extension, and the man can shift it sideways or rotate it. Angular momentum mvr = L of the rod is a powerful tool to adjust his CoM: he can "lean" on it and pushing it one way makes his body rotate in the opposite direction.

A heavy rod also lowers the center of mass and makes the body on the rope more stable. The longer (r)/heavier (m) the rod, the greater is L, and the greater the push he can apply to his own body 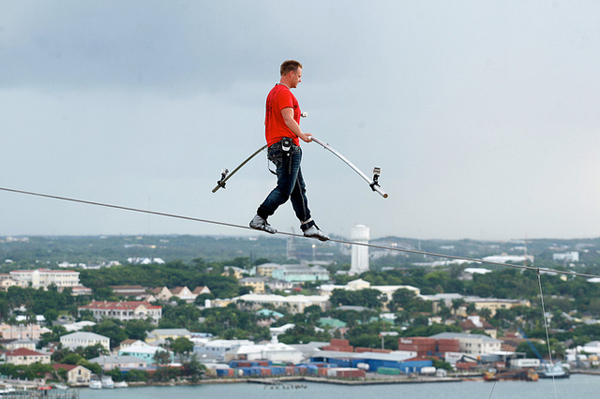 If the rod were curved just a little below the rope (not in the above picture, of course) and had some ballast at both tips, then the walker could never fall down, if he lost his balance the ballast wpwould bring him up again.(, as long as he does not slip off the rope)

rob has misunderstood the picture and his comment has provoked the downvotes. No worries. The center of mass in the picture is much lower then the CoM of the walker, therefore the whole system is more stable. 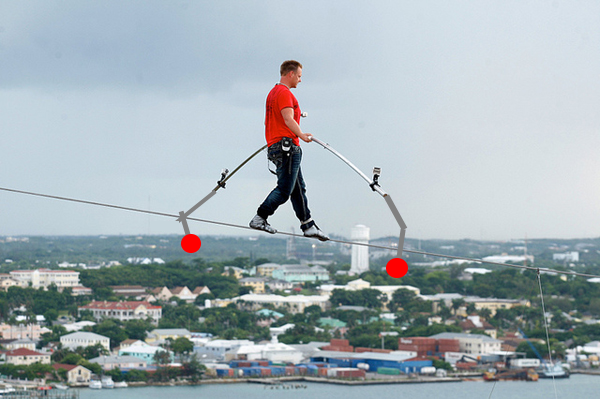 If he carried same rod wit same inertia, but in a higher position , he would be even less stable 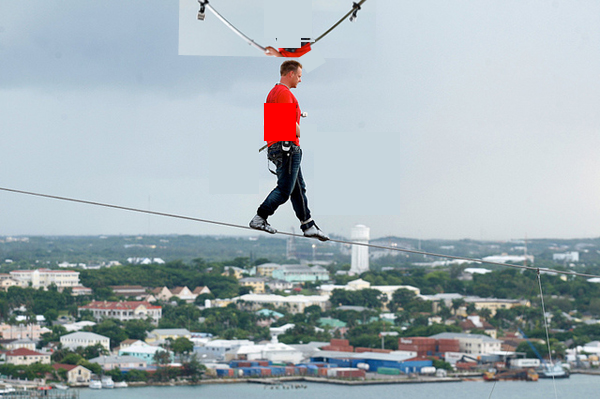 than he would be with no rod at all, and he would easily fall down

A long rod, especially with additional masses at both ends, has a large moment of inertia and therefore can change its angular velocity only slowly. This means that if the walker gets off-balance, there is more time available to correct before he falls.

Not the answer you're looking for? Browse other questions tagged newtonian-mechanics rotational-dynamics stability or ask your own question.

62
Why doesn't a bike/bicycle fall if going with a high speed?
1
Pulley system with rope
2
What is the effect of torque steering on a motorcycle with a long wheel base?
1
Why does an ice hockey stick, when thrown on ice always rotate and translate together before coming to rest? Why not only rotate or only translate?
25
A curious phenomenon with a stick
1
Rope and rotational mechanics: why does my solution method work?
1
Rotating rope with a ring
0
Why do objects always stick together in perfectly inelastic collisions?
2
Why are wheels made to carry more mass on the circumference?