What is the proof that shear stress in a static fluid element reduces to zero?

When we consider force balance on a static fluid element which is cut along some arbitrary plane as shown, we start by saying that the fluid is static and hence there is no shear stress along the plane. And from there we define the pressure as acting normal to the plane, and go on to derive the hydrostatic condition of pressures at a point. 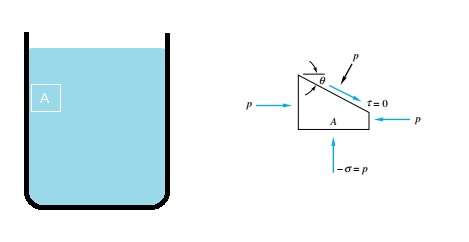 My question is, where does the assumption that the shear stress is zero come from? Is it purely due to observation that a fluid flows continuously under any applied shear, or is there a fundamental basis?

Suppose, say we do not initially let the shear forces vanish along the plane of the element. If we take a non-zero value of the shear force and do a force balance on the element, we do not reach the hydrostatic condition since the shear values are not zero now. How can we proceed now to prove that the shear stress is zero?

1
Shear stress and static fluids
5
Fluid mechanics paradox: The force needed to 'balance' a fluid using a piston
1
Stress in a cylinder with no internal pressure
0
Show that there are compressive forces in a static fluid not by arguing that there is no shear force
0
Hydrostatic pressure distribution balancing the weight of the fluid
32
What really is a fluid?
1
Torque exerted by pressure in a fluid
1
Fluid pressure in Neumann's triangle for triple junctions
5
What is the cause of “Static Pressure” in flowing fluids? How do we understand the idea of static pressure intuitively?