What does the Moon's orbit around the Sun look like?

I'm curious as to what the Moon's orbit around the Sun looks like. If there's an answer, what's the intuition for it? Here are some things I'm assuming when trying to tackle this question:

I'm curious as to what does the moon's orbit around the sun looks like?

One might think the orbit (in the sun's rest frame) follows the path of an epitrochoid.

A (very) over exaggerated view of this motion (for unrealistic parameters, thus, not an accurate representation) can be seen in the following animation:

Note that if you change the ratio of the different radii to values that are to scale, then the plot would look more like an epicycloid as in the following example animation. The orbit is more realistic but still exaggerated because it would be impossible to show half an orbit to scale.

The correct result is shown in the zoomed-in view of David Hammen's post above.

The correct path uses two different orbit rates, one for the Earth about the sun (i.e., 1 year) and one for the Moon about the Earth (i.e., ~27 days). In the following example, which is still an incorrect (i.e., exaggerated) orbital motion but much better approximation, I exaggerated the ratio of the astronomical unit to Earth radius by a factor of 100 and increased the moon's orbit by a factor of four to help make the visualization more obvious.

The following example does not exaggerate the orbital periods relative to each other and is a zoom-in of the above graphic (oddly the GIF, created through the same methods, does not loop on my screen). Here the orbit is always convex with respect to the sun, as David has correctly stated.

This means the Moon's orbit about the Sun doesn't look like either of the two images below: 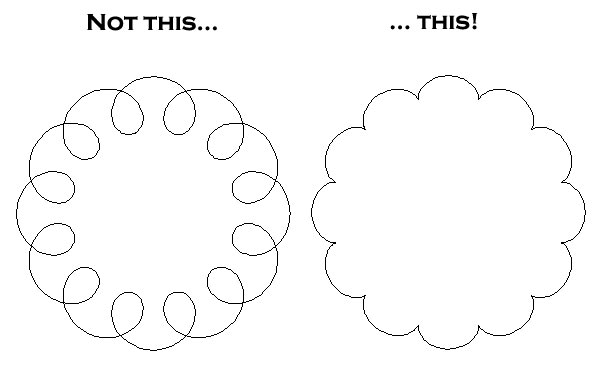 Phil Plait is normally very good. This is one of those places where he was bad. The Moon's orbit about the Sun instead looks like this:

For an observer on the Earth, the Moon appears to orbit the Earth roughly 13 times a year.

This is correct. More on this below.

The Earth, the Moon, and the Sun remain in the same plane.


Note that one of the sites I referenced (http://www.wired.com/2012/12/does-the-moon-orbit-the-sun-or-the-earth/) asked whether the Moon orbits the Earth or the Sun. That blog erroneously came up with the answer that the Moon orbits the Sun rather than the Earth. Looking at acceleration or the shape of the orbit is the wrong way to look at the question “Does object A orbit object X or object Y?”

One answer to the question of “does the Moon orbit the Earth or the Sun?” is “Yes!” "Orbit" is not a mutually exclusive term. If one insists on a singular answer, the right way to look at things is via energy rather than acceleration. Since the Moon is gravitationally bound to the Earth, the Moon does indeed orbit the Earth.

Before answering let me mention that there is a terrific free applet showing the orbits, including the velocity vectors of the system Sun/Earth/Moon:

It is in java so pretty easy to download and use.

The moon's orbit must be concave toward the sun.

The moon speeds up as it goes toward the sun, and it slows down as it moves away.

Actually is the other way around (in the Sun's frame of reference). The moon slows down when it moves towards the Sun and speeds up when it moves away. You can see this by doing a velocity composition. When The bodies are ordered as Sun--Earth--Moon the velocities of the Earth (approximately the velocity of the center of mass of Earth/Moon) and the velocity of the Moon are approximately parallel and the resultant is a large vector. When they are ordered as Sun--Moon--Earth, the velocities are anti-parallel and the resulting one is a small vector.

For an observer on the earth, the moon appears to orbit the earth, roughly 13 times a year.

The Earth, the moon, and the sun remain in the same plane.

From this it follows that at no point of its path around the sun the moon will ever show a backwards motion.

The path is similar to the trajectory of a point (moon) on the perimeter of a (somewhat sliding) wheel rolling around a large circle.

2
If gravity can be disrupted by larger forces, why does the moon orbit the Earth instead of the Sun?
0
Are there any moons that exhibit a non-convex curvature in their orbit about the Sun?
0
If Earth orbit around the sun was closer would it change the shape of its orbit into a dented 104 node ellipse?
0
How does the Sun's gravity affect the shape of the orbit of the Moon around the Earth?

16
Is Feynman's explanation of how the moon stays in orbit wrong?
7
What are the forces behind the orbit of the Earth around the Sun?
0
Satellite passing near Lagrangian points
0
Would Earth always face Sun the same way if Earth didn't rotate around it's axis?
1
Will a satellite orbiting the moon have a tidal locked orbit?
1
How much of the Tidal Energy can be attributed to the Sun?
0
How do I calculate evection and variation for the moon in my simple solar system model?
0
How does the Sun's gravity affect the shape of the orbit of the Moon around the Earth?