What is it about the "conduction band" of a material that is distinct from the valence band?

I'm taking a course in nanotech and we're discussing nanoelectronics. This has led to a discussion of conductors, semiconductors, and insulators. I have a number of lovely diagrams explaining the fact that there is a band gap of energy states that fall in-between quantum energy levels that are "forbidden" for electrons to occupy. I understand the concept of quanta and why an electron cannot take on an energy state in this band gap.

What I don't understand is simply this: Why is it that when an electron is in the valence band it doesn't conduct but when it is in the conduction band it does?

In other words, what, physically speaking, is special about the conduction band that is not characteristic of the valence band or any lower filled bands?

I guess in the final analysis I am trying to get a grasp for a quintessential "conduction-ness" that will help me understand the fundamental principle of conductivity. I will be taking a course in Electricity and Magnetism in 2 semesters and will no doubt learn a great deal more about this, but for now, any light you can shed would be helpful not only in this course but in understanding superconductance as well because that is all about getting electrons into the conduction band and then keeping them there by dropping the resistance to 0.

And that's why the electrons in the valence band won't conduct electricity. It isn't that they can't move, it's because for every electron moving one way there is another moving the opposite way so there can be no net motion.

By contrast the conduction band contains unpopulated eigenstates so when an electric field is applied the electrons can redistribute themselves among the available momentum states to produce a non-zero net velocity.

On the other hand, a perfectly full band conducts just as well as a perfectly empty band: No conduction at all.

Now, nobody is surprised when you say an empty band can't conduct, but at first it seems surprising that a full band is the same way. After all, we are given analogies of water pipes and such, and there's nothing wrong in a pipe full of water, right? Well, all analogies have their limits. As John Rennie points out in his answer, the problem is that a full band contains equal populations of left-moving electrons and right-moving electrons, and so no net motion occurs. It's not that space is filled with electrons getting in each others' way, but rather, the single-particle phase space is fully packed and has no remaining degrees of freedom. The idea that phase space can be packed is something very peculiar to fermions, with no classical analogy.

(By the way, you will probably not find this answered in your Electricity and Magnetism course. Nanoelectronics is the closest you'll get to answering this question about what conduction really means, microscopically.)

An example of a doped semiconductor might give an intuitive picture of some aspects of this topic: 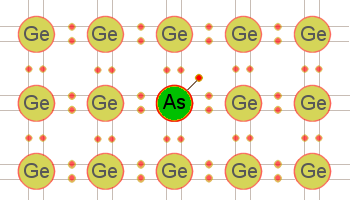 Now, Pauli's exclusion principle forbids two electrons to occupy the exact same energy state. If one electron takes one energy state, then other electrons in the same band now have less unoccupied states to move to.

So the more electrons that are brought to the conduction band, the less freedom each of them has to move around within this band. If it becomes totally full, they are all again "fixed" at their current energy state, and must again be added a large portion of energy to be ripped (to make the large jump) to an even higher band to reach freedom again.

-1
Conduction and valence band confusion
14
What is the difference of the gap between superconductor and insulator?
4
Why do unfilled energy bands in crystals result in electrical conductivity?