I have been attempting to find a general formulae for dark matter scattering off of protons (or other baryonic matter) but with no avail. I took a quick look at solar capture of dark matter but the capture rate seems to be usually done for a very specific dark matter model.

So, what I would like to have is simply the chance of there being scattering given some distribution of baryonic matter $f_b$, dark matter $f_{DM}$ and some given scattering cross-section $\sigma$ that we assume to be a free parameter.

One can assume WIMP dark matter.

There will be as many formulae as models, because it depends what one supposes dark matter is composed of.

In particle physics and astrophysics, Weakly Interacting Massive Particles, or WIMPs, are among the last hypothetical particle physics candidates for dark matter. The term “WIMP” is given to a dark matter particle that was produced by falling out of thermal equilibrium with the hot dense plasma of the early universe, although it is often used to refer to any dark matter candidate that interacts with standard particles via a force similar in strength to the weak nuclear force.Its name comes from the fact that obtaining the correct abundance of dark matter today via thermal production requires a self-annihilation cross section of ⟨ σ v ⟩ ≃ 3 × 10 ^− 26 c m^ 3 s^ − 1 which is roughly what is expected for a new particle in the 100 GeV mass range that interacts via the electroweak force. Because supersymmetric extensions of the standard model of particle physics readily predict a new particle with these properties, this apparent coincidence is known as the “WIMP miracle”, and a stable supersymmetric partner has long been a prime WIMP candidate

There cannot be one formula for the cross section as there are many candidate particle that may model the behavior.

The composition of dark matter remains uncertain. Possibilities include dense baryonic (interacts with electromagnetic force) matter and non-baryonic matter (interacts with its surroundings only through gravity).

The cross section will be a function of the mass of the particle and of the type of interactions it can have in order to have the appropriate observed self annihilation cross section. To show an example of the complexity here is for a hypothetical WIMP the WIMP nucleon cross section as a function of its mass as reported by the CDMS experiment : 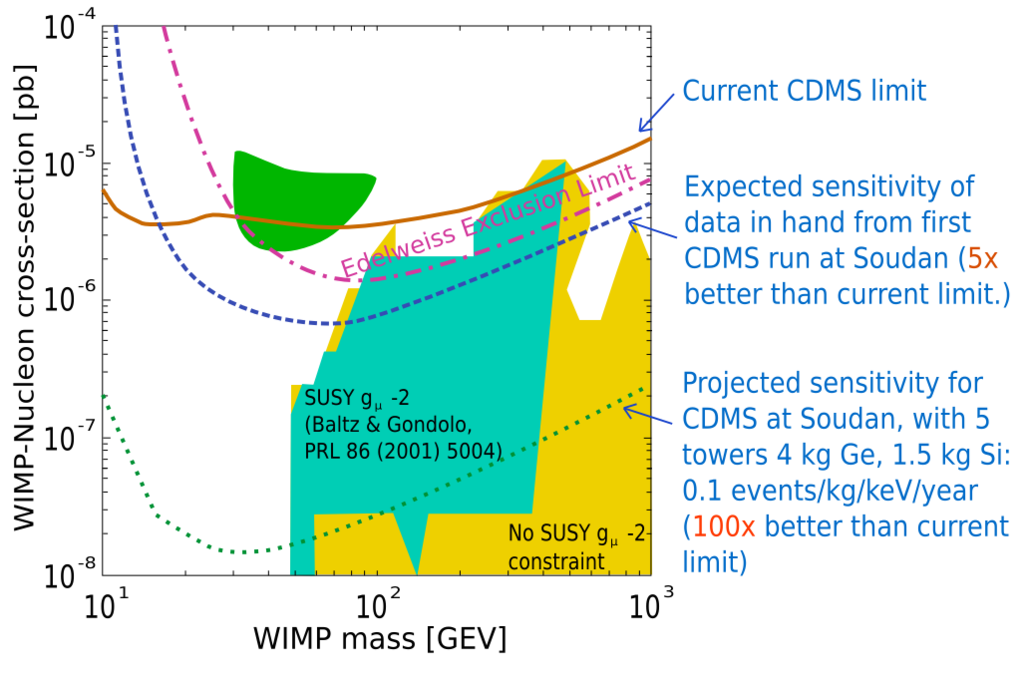 Here is a dissertation dealing with these limits.

Not the answer you're looking for? Browse other questions tagged scattering dark-matter scattering-cross-section or ask your own question.

56
What is the upper-limit on intrinsic heating due to dark matter?
5
What is the formal definition of spin-independent vs. spin-dependent scattering?
3
What formula is used to make exclusion plot in the direct detection of dark matter?
1
Why does the scattering cross section equal to the sum over all differential cross section; including the incident angle?
0
Difference between cross section and probability of interaction
3
Why don't cosmological observations tightly constrain cross-sections for direct detection of dark matter?
1
Calculating classical scattering angle using Gauss-Legendre quadrature
3
Why should dark matter and dark energy inherently require theoretical modification?