Why pressure standing waves have different nodes location with respect to the corresponding displacement waves?

In acoustics the pressure wave has a $\pi/2$ phase difference with the displacement wave. But I do not understand how this leads to a different position of nodes of pressure inside a tube with respects to the nodes of displacement.

So apparently there is no difference in the interference of pressure or displacemente waves, hence I do not see the reason of the different location of nodes, for istances in the followin situation

So why the nodes of a pressure standing wave should have a different location with respect to the ones of the corresponding displacement standing wave?

To clarify the question : in the picture there is a possible situation described with the two speakers, which emits sound in phase at the same frequency. I'm sure that the displacement waves will have an antinode at the midpoint, but what about the pressure wave. Is $A$ or $B$ the correct diagram of the corresponding pressure wave? 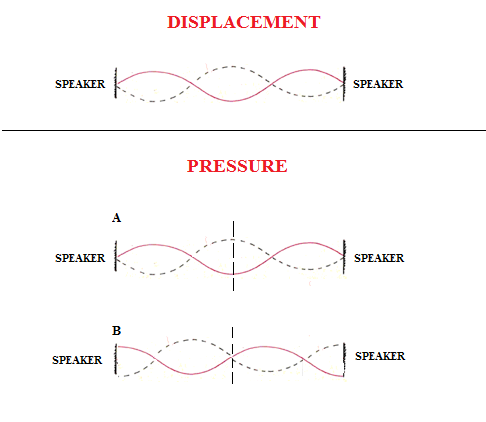 On the one side there is a pase difference of $\pi/2$ with the displacement that makes me think about $B$ (node in the center instead of an antinode).

On the other side if both of the waves coming from the two different speakers have the same phase difference with the corresponding pressure wave, then at the midpoint there should still be an antinode (as for displacement) because the phase difference of pressure waves calculated at midpoint should be $$\Phi_1-\Phi_2=k(\frac{L}{2})-\frac{\pi}{2}-(k(\frac{L}{2})-\frac{\pi}{2})=0$$ Which means constructive interference at the midpoint ($L$ is the distance between the speakers and $k=\frac{2\pi}{\lambda}$).

There is a difference between pressure and displacement: pressure is "absolute", displacement has a direction. With speakers on the left and right, pointing to each other, the pressure wave from the right will be the mirror image of the one from the left, the displacement wave is not only mirrored but also changes sign (mirrored by the x-axis). Taking that phase change into account, it should make more sense.

Not the answer you're looking for? Browse other questions tagged homework-and-exercises pressure acoustics wavefunction interference or ask your own question.