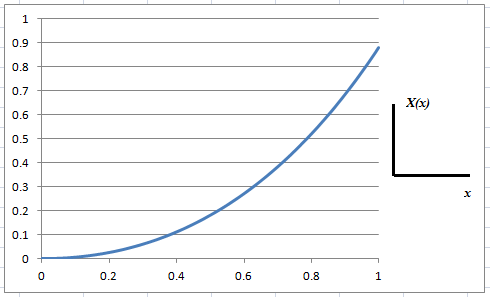 But there are several modes of oscillation available to a tuning fork. Two important ones are: 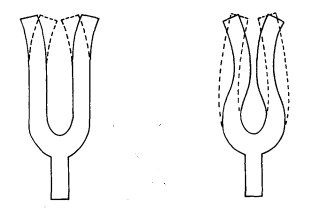 Left: fundamental mode (derived above), right: clanging mode. The latter is said to be obtained by hitting the tine "hard" and has a frequency roughly 6.26 times higher than the fundamental.

I suspect that this hitting "hard" changes the boundary condition(s), leading to a new set of coefficients for $X(x)$. I suspect some boundary condition may have to be applied to $x=L/2$ rather than $x=L$ but cannot see how hitting the tine hard can have that effect.

Can anyone see it?

So I don't think the "clang" mode has a different boundary condition from the fundamental mode. They are simply different normal modes of vibration , the "fundamental" mode being the first normal mode, and the "clang" mode being the second normal mode (first harmonic is really a misnomer here as the frequencies aren't harmonics). Both of these modes have boundary conditions of treating the fork as a cantilevered beam (ie. one end, the stem end, fixed).

It's similar in idea to exciting natural harmonics on a guitar- you fix the string at the 12th fret with your finger and pluck along the string, exciting it at at the antinode.

The treatment by @Gert in the question is using the Euler-Bernoulli (E-B) beam theory. There is a decent Wikipedia article on this in which the in plane transverse normal modes of vibration of a cantilevered bar (free at one end, clamped at the other end in this case $x=0$) are computed and plotted.

Here is the plot of the shape of the bar displacement due to vibration, for the first few normal modes (normalized to the length of the bar being 1.0) from the Wikipedia article:

Mode 1 is the fundamental mode and has no node or antinode along the bar.

Mode 2 is the next normal mode (the "clang" mode) and shows a node (zero displacement) at just below 0.8 times the length of the bar, and an antinode (local maximum of displacement) at a shorter distance along the bar.

The higher order normal modes also show nodes and antinodes along the bar.

The statement that the clang mode displacement does not show optima or roots for $x<L$ isn't consistent with the second drawing of the tuning fork in the question showing the clang mode having a maximum and minimum of displacement along the length of the fork. Each term in the E-B equation's solution should indeed have a different constant.

Of course both analyzing a tuning fork in terms of a analytical solution using Euler-Bernoulli theory, and in analogy to a cantilevered bar, are approximations. A more accurate treatment would use Timoshenko beam theory and finite element analysis to find a solution.

0
What is the difference between note, tone and mode?