How can it be possible that the presently observable universe is much smaller than particle horizon?

Here is my answer, but if you have a different viewpoint, please argue against me.

The particle horizon differs from the cosmological horizon because of inflation. The vacuum density of the spacetime bubble at around $10^{-30}$ seconds becomes inflationary for about $10^{-35}$sec. Within chaotic infationary terms the vacuum bubble is on a high energy vacuum de Sitter spacetime and this detaches at around $10^{-30}$, and this high energy vacuum bubble can now inflate "like made" until the vacuum rolls into a low energy physical vacuum, that characterizing the vacuum now in this observable universe. This means that the cosmological constant $\Lambda~=~\Lambda(\phi,\dot\phi)$ for $\phi$ the inflaton field. This results in a bump in the above calculation of $\eta(t)$ which I have done numerically in the graph 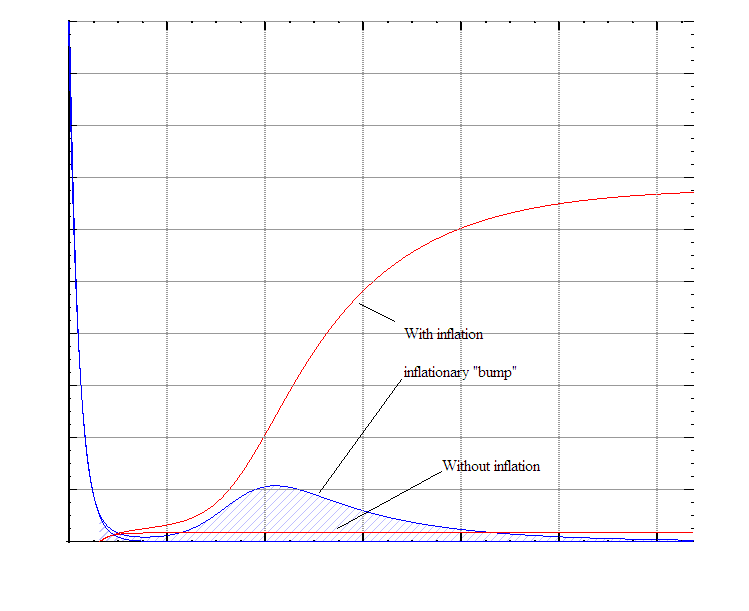 This is why the particle horizon is far larger than the cosmological horizon $r_h~\simeq~1.2\times 10^{10}$ light years. Beyond the cosmological horizon is a region where we can observe galaxies because we are actually witnessing them in the past when they were much closer. Any galaxy beyond the cosmological horizon today will never in our future be observed as it is today on the Hubble frame, Neither can we ever send a signal to such a galaxy. This is why with the Hubble relation $v~=~Hd$, that for $d~=~r_h$ we have $v~=~c$ and we observe these $z~=~1$ galaxies, and galaxies with $z~>~1$. The largest $z$ galaxies observed are around $z~=~8$. In addition the CMB is at $45$ billion light years distance with $z~=~1100$. The particle horizon is much more of a fundamental limit to observability. As one approaches the particle horizon the red shift factor $z~\rightarrow~\infty$ and any information reaching us is arbitrarily red shifted beyond observability.

Not the answer you're looking for? Browse other questions tagged cosmology cosmological-inflation or ask your own question.

1
How inflation solves the horizon problem
2
In cosmology, what is meant by a 'scale', e.g. 'scales smaller than the horizon'?
0
Inflation Theory. Horizon problem. Couldn't understand
1
How does the scale of homogeneity and isotropy of the universe change as we go back in time?
2
Why is it said that a random energy distribution in the early universe is more natural than a uniform one?
1
Is last scattering surface synonymous to the size of the observable universe?
4
About the applicability of the FRW metric in the present epoch vs the time of last scattering
1
Why wasn't CMB radiation absorbed long ago, since when it was emitted the universe was much smaller?