It is well known that there exists a reference frame where the total momentum of the Cosmic Microwave Background is zero (a basic fact of special relativity applied to a collection of massless particles) and the radiation is homogeneous and isotropic. This can be observed in the dipole anisotropy.

Neutrinos also decoupled from matter shortly after the Big Bang, and therefore relic neutrinos must form a Cosmic Neutrino Background ($\mathrm{C}\nu\mathrm{B}$). These neutrinos are extremely hard, if not impossible, to detect with current technology.

As is discussed in this answer, the "rest frame" of the cosmic neutrino background would be very similar to that defined by the cosmic microwave background if neutrinos were very light (say $<0.1$ eV). The Sun would be moving with respect to this frame at around 370 km/s.

But if neutrinos were more massive(say getting on for 1-2 eV) then they are expected to be very non-relativistic with speeds comparable to the escape speed of the Milky Way. In those circumstances they will cluster around the Milky Way and would have a rest frame that was more similar to that of the Milky Way galaxy itself - i.e. they would be orbiting around the Galaxy and the Sun would move on average at about 220 km/s with respect to the average neutrino.

At present neutrino rest masses are probably somewhere between these extremes and so the cosmic neutrino background is thought to have a small dipole anisotropy that will be somewhat offset with respect to that of the cosmic microwave background. By that I mean that if you subtracted off the dipole anisotropy implied by the CMB you would still be left with an anisotropy in the C$\nu$B. 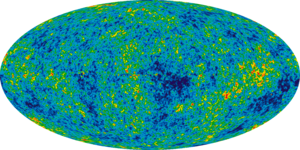 All-sky map of the CMB, created from 9 years of WMAP data.

are a relic of the density of matter at the time of the decoupling of photons, about 380000 years after the BB. In contrast, neutrino decoupling, if the neutrino cosmic background could be measured would be about one second after the BB.

The topology of the density of the stress energy tensor describing the universe 1 second after the BB cannot be the same as that of 380.000 years as electromagnetic and gravitational forces would be very active in the interval . Neutrinos would give a snapshot at 1 second from the BB.

Thus any presumed rest frame of CMB has small probability of being the same as for ($\mathrm{C}\nu\mathrm{B}$) . Think of shapes in fluid flow. They are different downstream.

Not the answer you're looking for? Browse other questions tagged cosmology reference-frames neutrinos cosmic-microwave-background or ask your own question.

2
Should the CNB be comoving with the CMB?
25
What does the cosmic neutrino background look like today, given that neutrinos possess mass?

3
How to calculate the density of relic neutrinos?
11
If we could build a telescope to view the cosmic neutrino background, what would we see?
2
Can the Cosmic Neutrino Background be detected from a lab moving near the speed of light?
25
What does the cosmic neutrino background look like today, given that neutrinos possess mass?
4
How much uncertainty has the relic graviton background?
2
Does the Cosmic Microwave Background falsify relativity of velocity?
8
Understanding the CMB background as a reference frame
1
Cosmic microwave background dipole anisotropy