What happen if Hawking radiation is not found?

I'm not a physicist but reading from a few popsci books. I read that Hawking has equations that explain Hawking Radiation precisely, right? Is this equation a proof that the radiation is real or we still need more evidence. And if it's proven wrong what does it mean to have rigid equations. 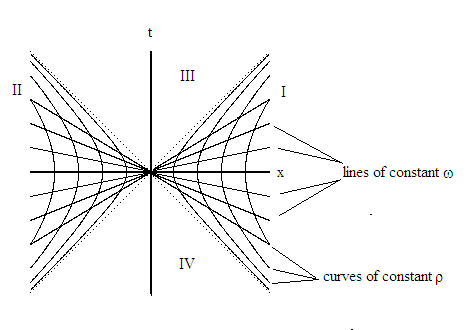 The hyperbolic lines are regions of constant radius from the $45$ degree lines that are a particle horizon. An observer on an accelerated frame, with acceleration $g$, has the observer behind them at a distance $\rho~=~c^2/g$. The larger the acceleration the the closer to the horizon the observer is. It is also interesting that for two particles to remain a constant distance from each other they must have different accelerations.

The spacetime metric distances are parameterized as $$ t~=~\rho sinh\omega,~x~=~\rho cosh\omega $$ the angle $\omega$ is a parametrized time. the metric in the Minkowksi form is then $$ ds^2~=~-d\rho^2~~-~\rho^2 d\omega^2~-~dy^2~+~dz^2. $$ If we euclideanize this so that the metric is not Lorentzian we can then think of the unitary time development operator $U(t)~=~exp(-iHt)$ across region $I$ to region $II$. We do this to consider the evolution of a quantum fluctuation that encloses the origin of the diagram above. We then replace $i~\rightarrow~1$ and the time is evaluated for the entire loop, think of this as the perimeter of the loop, as $t~\rightarrow~\rho\omega|_0^{2\pi}$ $=~2\pi\rho$. We then have the operator $U(\omega)~=~exp(-2\pi\rho H)$.

Alice and Bob measure the quantum fluctuation, say a loop that encloses the origin, as a particle that emerges from the horizon and then approaches it again. The particle emerges from the past horizon slowly and then slowly approach the future horizon, for Bob in region $I$ can only observe in a redshifted and time dilated form. Alice in region $II$ observes the same. For this virtual loop we may think of Bob and Alice as witnessing different states $\phi(b,b')$ and $\chi(a,a')$, but which form an entangled state $\psi$ with density matrix $\rho_{AB}~=~\psi^*\psi$ $$ \rho(a,a',b,b')~=~\chi^*(a,a')\phi^*(b,b')\phi(b,b')\chi(a,a'), $$ where Alice and Bob observe what can be found by tracing over Bob's and Alice's state variables $b,b'$ and $a,a'$.

The time evolution operator has become a thermal or Boltzmann operator. The temperature is then $\beta~=~2\pi\rho$ or $$ T~=~\frac{1}{2\pi\rho k_B}. $$ This is the Unruh effect, explained in elementary terms. The Rindler wedge has no curvature. A black hole of course has curvature; the Riemann curvature has zero Ricci curvature and is all Weyl curvature for a sourceless region. We can however "map" the Unruh effect to the black hole case. This is done by considering the Unruh case as a case of an observer close to the horizon on an accelerated frame. The Hawking radiation emitted for large $\rho$, which persists because of spacetime curvature can be realized by the substitution $\omega~\rightarrow~tc^3/4GM$ with then gives the temperature for the black hole $$ T~=~\frac{\hbar c^3}{8\pi k_B GM}. $$ This is a quick way to think of Hawking radiation.

We can now use this to consider the empirical cases possible. The most likely empirical evidence will come from Unruh radiation. I wrote a paper in 2006 that won an honorable mention by the GRF essay contest for how this could be done. The idea is to make a Bose-Einstein condensate (BEC) of Rb ions, and then pass these through a capacitor with a large electric field. The acceleration then induces a phase change on the BEC which is measured by detecting the paths of the ions. Unfortunately this experiment has not to my mind been performed. Other ideas that I think are "noisier" have been to look at various high energy scattering processes.

As for measuring Hawking radiation directly, that may be tough. We are not obviously going to produce quantum black holes, at least not any time soon. Primordial micro-black holes might have emerged from the big bang. However, the exponential expansion of space during inflation tends to suppress that. If primordial black holes were produced in the very early universe it might have been prior to the inflationary period, or maybe after the vacuum transition to generate reheating. In the latter case this would occur in a much less dense environment. However, fluctuations might have produced some of these.

If Unruh radiation is not detected by some means it would point to something terribly wrong with our current understanding of physics. The physics is spacetime of accelerated frames plus quantum entanglement. The failure to detect this means either there is a flaw in how these two are being considered with each other. Maybe there is some additional physics we are not aware of. The other alternative is that something is fundamentally wrong with either relativity or quantum mechanics. This would be a very disturbing development.

Hawking radiation is a theoretical result from the analysis of quantum field theory in general relativistic, curved spacetime. This sort of semi-classical analysis, combining aspects quantum mechanics of with classical GR, is a stepping stone to a full theory of quantum gravity.

The theoretical result does not prove that Hawking radiation exists. If Hawking radiation is found to not exist then the underlying theoretical methods used to derive it are incorrect in some way. So far both classical GR and QFT have agreed with every experiment conducted. In that sense neither theory would be fully broken by a no Hawking radiation observation, but the method used to combine the two would be suspect.

We should already expect both GR and QFT are incomplete on some level. So maybe we know less about how to put them together than we think. There are many other semi-classical GR results that would instantly become suspect.

For researchers who are working towards grand unified theories or other quantum theories of gravity, this would be a problem. The two leading candidates for a quantum theory of gravity: string theory and loop quantum gravity, both predict Hawking radiation.

The Bekenstein-Hawking result for the entropy of a black hole is closely related to Hawking radiation. Both string theorists and loop quantum graviteers hold their respective theories' independent prediction of the same result as strong proof of their validity. Of course, no one knows which theory (or both, or neither) is correct.

If Hawking radiation is shown to be incorrect, then we can likely throw out both string theory and loop quantum gravity, since they both predict it.

Not the answer you're looking for? Browse other questions tagged black-holes experimental-physics hawking-radiation or ask your own question.