What is this shadow being cast upon?

The picture below is from on top of Mt. Shasta at sunrise. The sun was directly behind me when I took the picture and it appears to be casting a shadow on.... the sky itself?

Can anyone explain what the shadow is being cast on? There don't appear to be any clouds or anything. 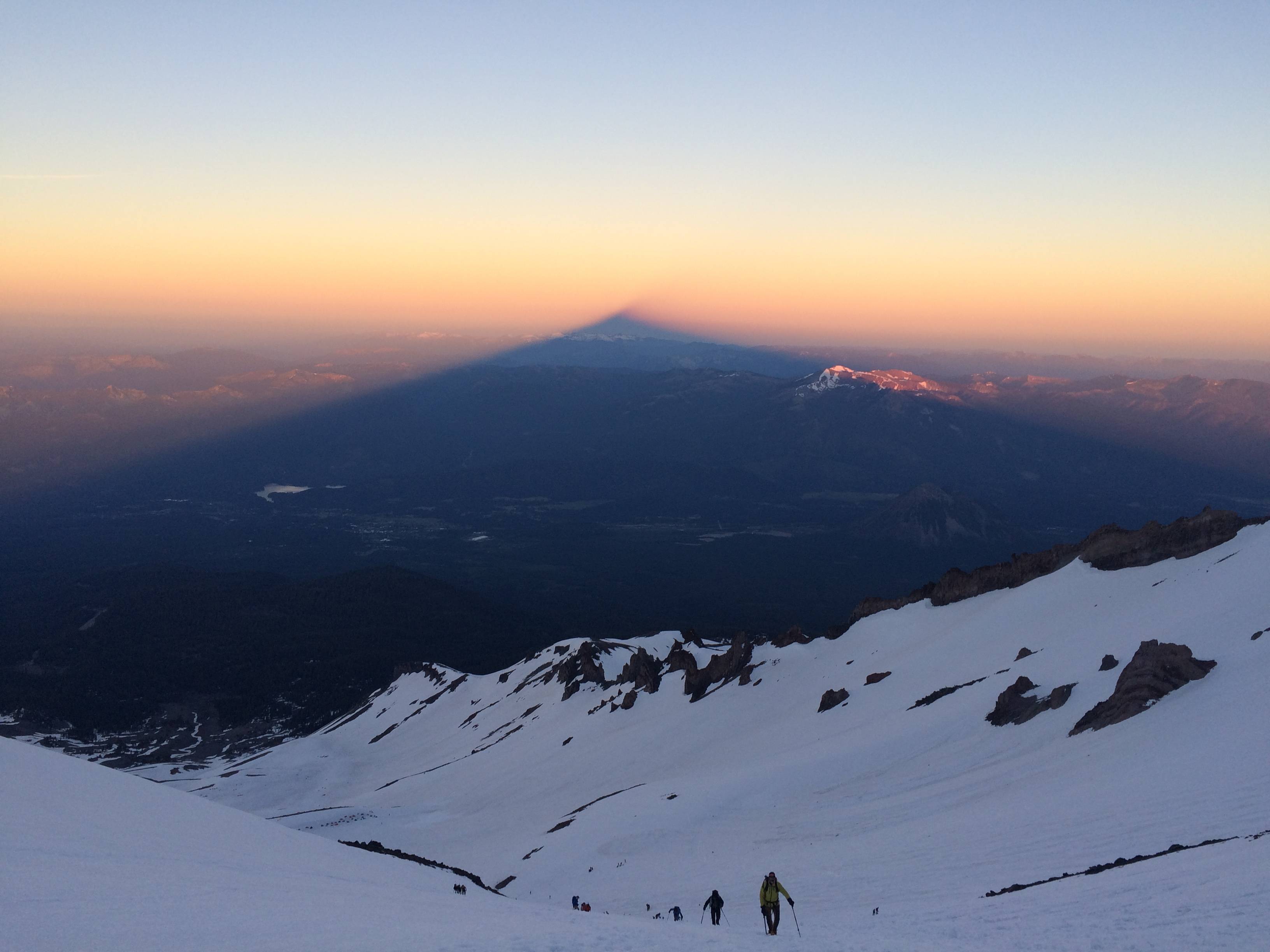 I found this site

Seen from their summits almost all mountain shadows look triangular regardless of the mountain's shape. This is a perspective effect. You are standing at the top edge of a long tunnel of shadowed air and looking along its length. The tunnel's cross section is the shape of the mountain but its "end" is so far away that it looks insignificant. The finite size of the sun also causes the umbral (fully shaded) parts of the shadow to converge and eventually taper away. The tapering sets limits to the umbral length of shadows. That of the Earth is over a million miles. That of a high mountain can be two to three hundred miles. Triangular shadows are not seen from objects much smaller than mountains because their shadows are not long enough.

On another page, it says:

From the summit, perspective effects nearly always make the shadow triangular regardless of the mountain's profile. You are standing at the top edge of the shadowed tunnel and looking out along its length which can be more than a hundred miles. Only the shadow's end carries much information about the mountain shape and it is so far away and in any event blurred by the 0.5º angular spread of the sun's rays that it is hardly visible

To elaborate on "unlit air", as an answer to your "There don't appear to be any clouds or anything," air itself reflects light, as is evident at night when it is dark. It is also seen in the shadow of the earth as the sun rises on a clear sky, a deep blue separated often from the pink/orange of sunrise and sunset. That was the beginning and end of a day in the variable hour ancient calendars.

Why should a shadow be cast on something?

Look at this picture taken at sunset: 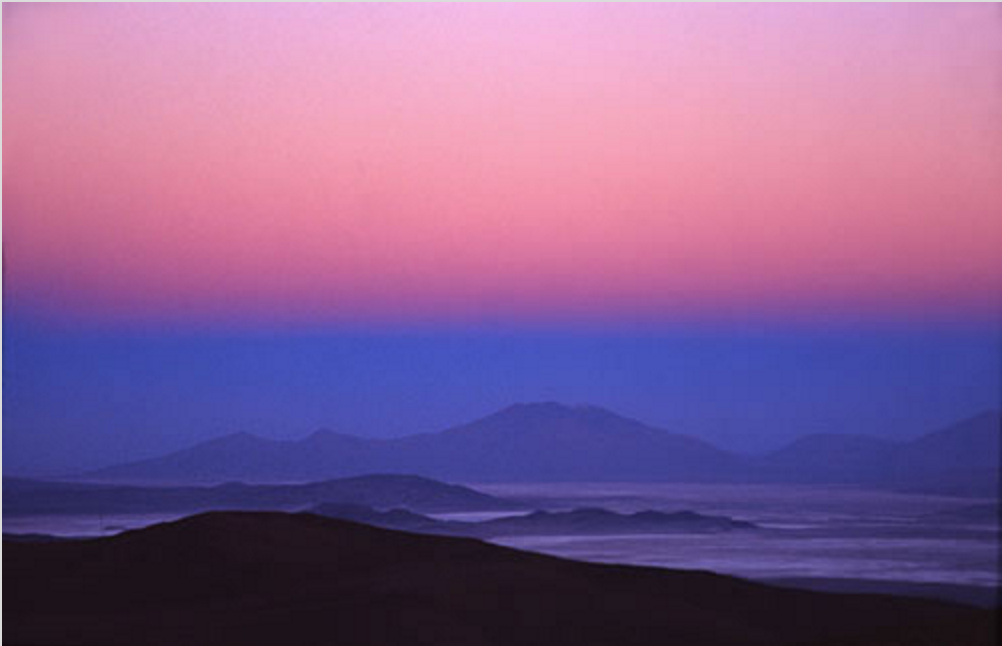 What is that dark blue band at the horizon?

Answer: the shadow of the Earth itself:

In a certain way, we can say that the night sky itself is the result of the shadow of the Earth being cast on the sky (think about it).

Basically, when you are standing on top of the mountain, you are seeing a portion of the sky in which it is already night. The effect is even clearer in other pictures, like this one: 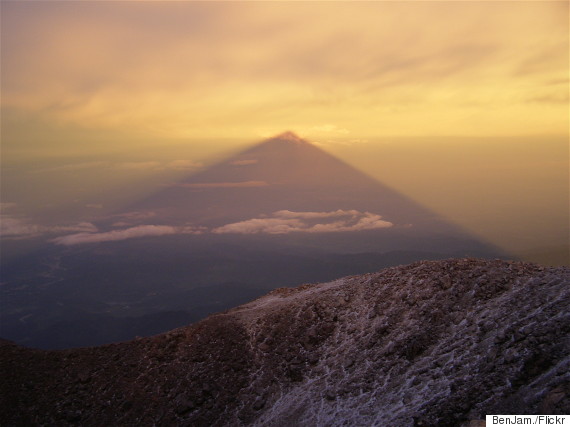 The sky is not completely dark in the cone of shadow because of scattering from the atmosphere surrounding the cone, so it retains that orange-ish or blue-ish color, depending on the hour the photo was taken.

I include a (totally professional) sketch illustrating the phenomenon:

Update: the role of the atmosphere

It looks like that my answer was a bit too synthetic and the role of the atmosphere was not so clear. This is my fault, so I would like to clarify this point.

What happens basically is that air molecules hit by light rays from the sun scatter it with an intensity proportional to the inverse fourth power of the wavelength, $I \propto \lambda^{-4}$: since blue-ish has a shorter wavelength than green-ish, red-ish etc., the sky results blue (so why are sunsets red?).

So, in a certain sense, we can say that the shadow is being cast on the atmosphere itself.

My rethorical question (Why should a shadow be cast on something?) was perhaps misleading, but I only meant that the shadow was not cast on a solid object or on a cloud.

What is this shadow being cast upon? The sun was directly behind me when I took the picture and it appears to be casting a shadow on.... the sky itself? 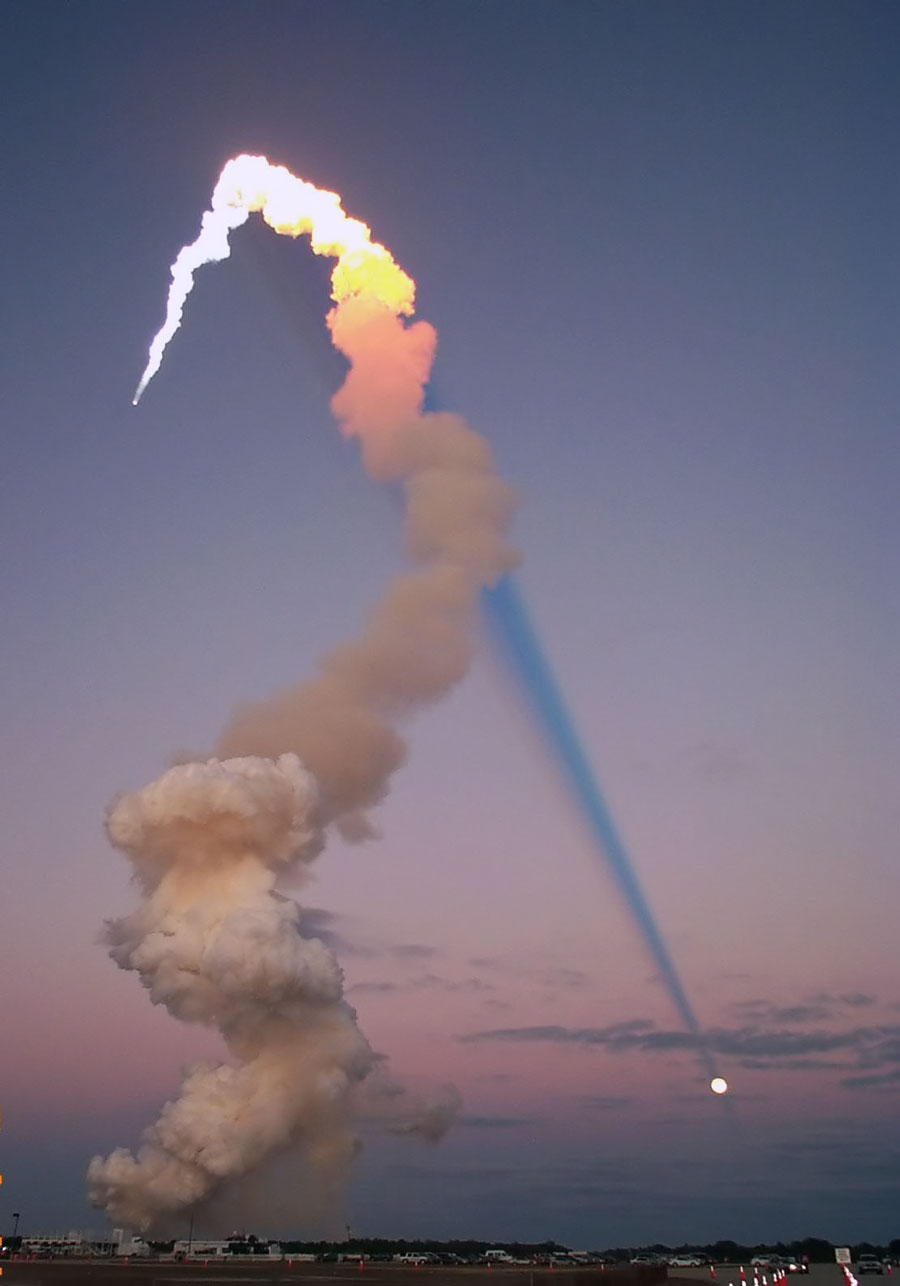 Note: The bright white object in the above image is the nearly-full Moon rather than the Sun.

Closer to the question at hand, 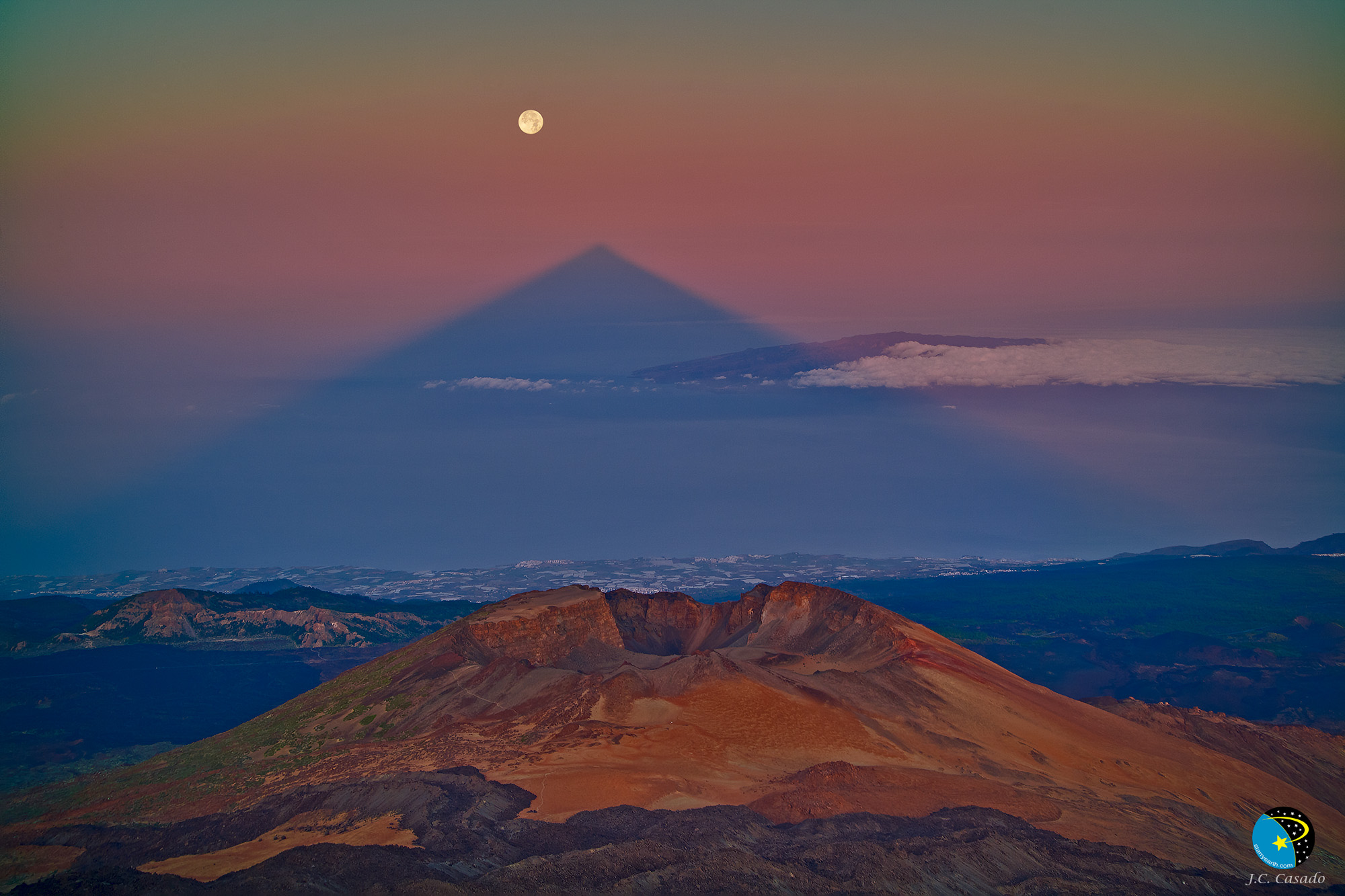 The explanation from Astronomy Picture of the Day (emphasis mine):

The Mount Teide volcano itself does not have the strictly pyramidal shape that its geometric shadow might suggest. The triangle shadow phenomena is not unique to the Mt. Teide, though, and is commonly seen from the tops of other large mountains and volcanoes. A key reason for the strange dark shape is that the observer is looking down the long corridor of a sunset (or sunrise) shadow that extends to the horizon. Even if the huge volcano were a perfect cube and the resulting shadow were a long rectangular box, that box would appear to taper off at its top as its shadow extended far into the distance, just as parallel train tracks do.

Plain and simple answer: yes, the sky itself. Unlit sky is black, the color of the sky comes from scattering of sunlight. So the dark parts are the ones where it's night already (they don't see the sun because the mountain is in the way), the rest still has evening.

Not the answer you're looking for? Browse other questions tagged visible-light shadow or ask your own question.

14
Why does the sky suddenly look gray through this window?
3
Does this shadow diffraction effect have a name?
13
Glowing light around my shadow during sunrise
0
Why is the moon not full?
13
What causes a circle of light to appear opposite the sun when looking from an airplane?
2
Why don't flying birds have shadows?
1
Why does the cloud in a straight line as if someone draw a line in the sky with a straight edge?
0
Rainbow colors along horizon