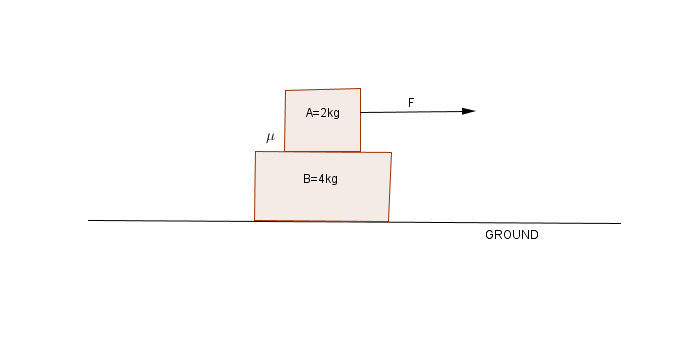 But I am myself confused in proving the last line that till $t=7.5 sec$ they move together. For example lets consider time $t=1sec$. At the taken time $F=2N$.

Now when $F=2N$, the a friction of $2N$ would also act in the opposite direction on $A$ as $f_{max}=10N$. From Newton's third law an opposite reaction of frictional force would act on $B$ and $B$ would start moving ahead with an acceleration of $0.5m/s^2$ Hence now the block B has started motion but $A$ according to equations of dynamics is at rest which is actually not possible as till $7.5 sec$ the must move together. Please tell me where I am wrong?

Remember that static friction is a constraint force: it enforces the rule "no motion between these surfaces" as long as the force needed to do so does not exceed the maximum.

The force of static friction will have the value needed to prevent relative motion unless that value exceeds the maximum.

So there are two possibilities to what happens here.

Free body diagrams of blocks are as below: 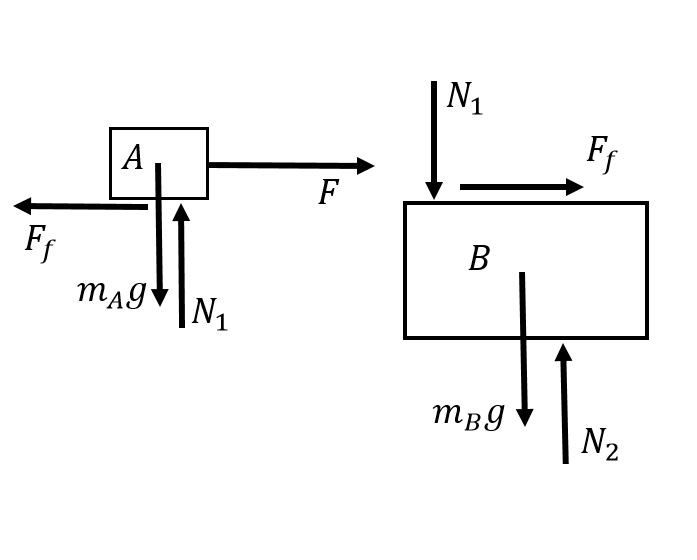 4
What does it mean if a = g in this situation?
15
Block on a block problem, with friction
0
Two blocks connected by spring on frictionless surface and Newton's third law
2
Is the newton's second law for a body experiencing a frictional force, relative to the surface in contact?
4
Blocks stacked on an incline connected by rope around pulley
1
Rotational Kinematics - Newton Second Law
0
Pressing a mass against a spring on a table with friction