What is the meaning of the size of a particle in QFT?

I have often seen people refer to the size of a particle being at most a given value, or a particle being a point particle, in the context of quantum field theory. Examples are the Wikipedia entry on the electron, where it says

Observation of a single electron in a Penning trap shows the upper limit of the particle's radius is $10^{-22}$ meters. Also an upper bound of electron radius of $10^{-18}$ meters can be derived using the uncertainty relation in energy.

or the accepted answer to the related question Do electrons have shape?, which starts

As far as we know the electron is a point particle

this answer to a physics stackexchange question which mentions

We don't know exactly how small quarks and electrons are; they are definitely smaller than $10^{-18}$ meters, and they might literally be points, but we do not know.

However, in QFT a particle is a quantum of excitation of a field (see e.g. the concept of a particle in QFT, which doesn't explicitly talk about size or point particles), and it is not so clear what would be the meaning of the concept of size.

I have also heard "probing a system at a length scale" in these contexts, like in the aforementioned answer this answer in which it says

What they actually list in that reference is not exactly a bound on the electron's size in any sense, but rather the bounds on the energy scales at which it might be possible to detect any substructure that may exist within the electron. Currently, the minimum is on the order of 10 TeV, which means that for any process occurring up to roughly that energy scale [...], an electron is effectively a point. This corresponds to a length scale on the order of $10^{-20}$ m, so it's not as strong a bound as the Dehmelt result.

From that I infer that he means that a point particle is a particle with no substructure (whatever that exactly means). A possibly non-point particle may look pointlike up to a given energy scale, which seems plausible enough. To translate this into a length scale, you convert to the correct dimensions using factors of $c$ and $\hbar$.

Is it really an energy scale we are talking about when referring to the size and is it just a manner of speech to call this an upper bound on the size of the particle? Does it have any meaning as an actual size?

Finally this answer to a somewhat related question states that

Pointlike is a technical term that refers to the fact that in the standard model, the Lagrangian is a function of fields at the same point (rather than of integrals over fields in some small neighborhood of this point ...)

which seems to suggest that the size of a particle might be defined as the distance up to which the values of the field influence the value of the Lagrangian density at a point. Is that a sensible interpretation of the size? Is it equivalent to the other possible meaning (as the length corresponding to the energy below which no substructure can be detected)?

Composite particles in QFT have size in the sense that cross sections are not scale-independant (because they have a radius that breaks that invariance).

The radius of the proton was first measured by Robert Hofstadter. He studied the scattering of electrons and atomic nuclei. The Fourier transform of the cross-section is just (proportional to) the charge density. He found that, after a plateau, the charge density droped exponentially to zero. And that width of the transition zone was almost the same for all the nuclei. Including the proton. This means, of course, that the cross-sections weren't scale independent. 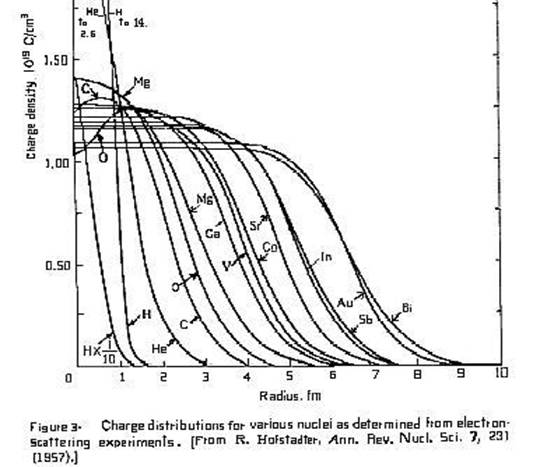 Increasing the energy of the incoming electrons, we are dealing with deep inelastic scattering. Now the electrons don't see protons, but their constituent quarks. And now, the cross sections are scale-invariant! This phenomenon is known as Bjorken scattering (in fact, this scaling is somewhat broken by quantum corrections). 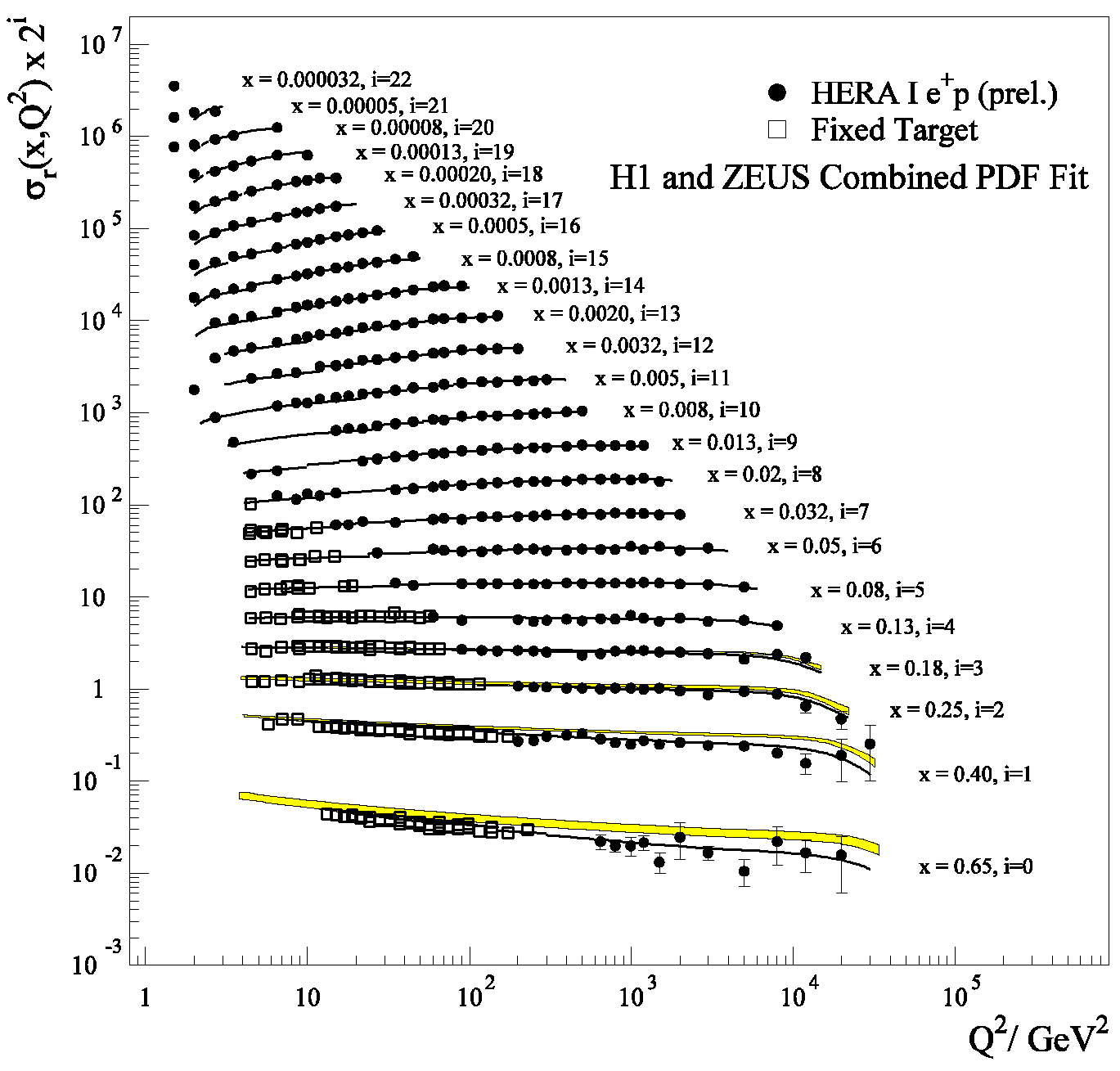 In more mathematical terms, the cross section for this scattering is given by the Rosenbluth formula $$\sigma =\sigma _{0}\left[ W_{2}+2W_{1}\tan ^{2}(\frac{ \theta }{2})\right]$$ where $\sigma_0$ is the classical cross section (Rutherford for spinless particles, Mott for spin-1/2 particles) and $W_1$ and $W_2$ are the form factors. A particle is called point-like if the form factors don't depend on the momentum transfer $Q^2$. Otherwise, the size of the particle is related to the Fourier transform of the form factors.

Note that, although the calculations needed to compute it are QFT, the concept of size of particles come from scattering theory and aren't inherently quantum. Quantum mechanics doesn't change the picture. Quantum mechanics adds other length scales, like the Compton length or the Bohr radius. But the size that I've discussed is much closer to the classic concept of size for macroscopic objects.

A point particle is an idealization of a particle. It simplifies calculations by using a 0 dimensional object instead of a normal particle in calculations where size, shape, and structure are irrelevant. For example, in the theory of, say, electromagnetism, scientists will talk about a point charge - a particle represented by a point that has a non-zero charge. More information about point particles is given at this website. A non-point particle is just one that has its size, shape, and/or structure defined. Composite particles don't have much to do with this particular situation, as they are basically a particle that is made of more than one quark (like a proton).

A length scale is a particular length or distance determined with the precision of one order of magnitude. This concept is important because physical phenomena with different length scales don't affect each other. In quantum mechanics, the length scale of something is related to it's de Broglie wavelength (which, in a nutshell, is the wavelength associated with a particle).

So, probing a system at a length scale just has to do with examining a system along a certain distance that is determined by the particle's wavelength.

A somewhat meaningful and useful concept for massive particles is the Compton wavelength: https://en.wikipedia.org/wiki/Compton_wavelength#Limitation_on_measurement

Not the answer you're looking for? Browse other questions tagged quantum-field-theory particle-physics elementary-particles point-particles or ask your own question.

58
Do electrons have shape?
49
What is the mass density distribution of an electron?
31
Where is the evidence that the electron is pointlike?
29
The concept of particle in QFT
21
Why do physicists believe that particles are pointlike?
23
What are the dimensions, width and length, of a photon?
3
Volume of a Photon?
7
In less technical language, what exactly is a "gravitational form factor"?
4
Heisenberg uncertainty principle and particle physics

1
Spatial bound on the internal electron structure
31
Where is the evidence that the electron is pointlike?
12
Experimental boundaries for size of electron?