How does an hydraulic ram pump work?

Images are from here 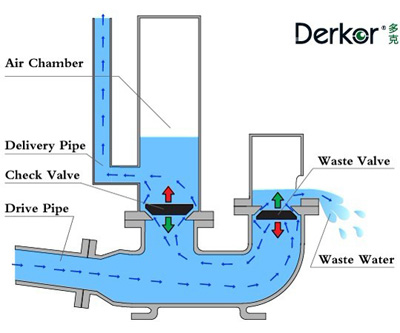 I doubt if the person who made that animated gif knew how the pump works. It's not at all clear why the valves open and close, and the regular movement of the water is nothing like an actual ram pump. It's more likely to confuse than enlighten people imo.

This one (found on http://www.meribah-ram-pump.com) does a better job showing the strong waterhammer pulse.

The waste valve can be a spring-operated normally-open valve that closes when the flow velocity generates sufficient drag. The water in the drive pipe, which is long and rigid (steel pipes will generate higher pressure than pvc), has gathered significant momentum (p=m*v) by that time. When the valve closes, that momentum generates pressure, slamming open the check valve and compressing the air in the reservoir. The check valve closes again, the compressed air expands, pushing water up the delivery pipe. The waste valve reopens and the process repeats.

The air reservoir stores the energy, absorbs the pressure pulses, and provides continuous flow at the delivery pipe. It's comparable to a smoothing capacitor: can handle any incoming current, absorbs voltage (pressure) peaks, and delivers the energy during the whole cycle. Without the air, every time the waste valve closes, the two water columns are in direct contact, one at full speed, the other at rest. That will cause either large pressure peaks (when they meet head on), or large movement of the pump. At 30,000 times a day, they may not last very long.

With a reservoir, most of the energy of the drive mass is transferred to the reservoir, and all that energy is used to pump the water in the delivery pipe.

The waste valve is normally open. In your figures, the plug is weighted and falls away from the valve. The water flow through the waste creates drag which pulls the valve closed.

and how does it sync with the check valve?

When the waste valve closes, it causes the pressure in the lower vessel to rise dramatically, forcing water through the check valve. The air chamber isn't strictly necessary from a physics point of view, but acts as a shock absorber and should improve the performance.

(and how does it sync with the check valve?)

it does not sync, (the waste valve opens and closes without relying on the check valve)

i guess it has to do with the air chamber (i do not exactly understand what is it for),

but i do not understand why does it open?

how a perpetual water hammer works

so if there is a check valve at the end of a pip (coming from a reservoir of water (which is higher then the valve))
1. check valve is open,
2. and it closes when the water goes through it at a certain speed,
by closing
3. it makes the water speed 0.
4. which creates a water hammer
5. which pushes the water back and (lowers the pressure).
6 which then opens the check valve
7. which lets the water out again
8. until it reaches the certain speed (then back to 2).

the reason why the valve can close is that the pressure of the water in the pipe (without the Water hammer) is enough for the valve to close,

so it should always be closed
what opens it is the very low pressure after the Water hammer as it can be seen in this video that after the Water hammer the pressure is so low that the water starts turning into gas,
but the reason the valve stays open until the amount of speed/pressure is reached that it should close is because of gravity (pulling on the flapper in the valve)

1
Speed of a dynamic hydraulic system
4
How does the pressurization in a house's water supply allow adjustable flowrates from a tap?
1
When pressure is exerted on parallel hydraulic pistons, do they start extending at the same time?
1
Does water boil when going through a tap (valve)?
1
Hydraulic analogy and pressure in pipes
6
Will air push the water or pass through as bubbles?
2
Can someone explain why there is water in this vacuum chamber?