Laser as an optical oscillator

How can Laser can be compared to a positive feedback amplifier? Does the two conditions for oscillator holds good for lasers too.

The general notions, to wit, recirculation and highly frequency-selective amplification of noise, carry over almost exactly from electronic oscillators to lasers.

From 30 year old memory of electronic oscillators, though, I think some of the details of the dynamical equations are a little different. Also, recirculating a light beam is much more complicated than simply connecting the output of an amplifier through a resonant tank circuit to the amplifier's input port although the principle is the same: the former is a formidable optical alignment problem that is an entire discipline in itself, whereas the latter involves soldering a few wires or plugging in an SMC connector.

One striking difference is that the noise in a laser that initiates the amplified output has a nonzero center frequency to begin with; photonic processes yield light whose frequency is set by energy gaps and other fundamental physics. In contrast, most electronic oscillators work at baseband, frequency selectively amplifying wideband noise. The noise that initiates the amplified output in a laser can be amazingly narrowband to begin with. For example, in my answer here I show how the Schrödinger equation is solved for an excited atom relaxing into the electromagnetic field. The center frequency of the disturbance is set by the energy difference of the atomic transition. The atom is essentially coupled to all modes at all frequencies equally (or at least over a very broad band), but as it "tries" to relax into modes widely separated from the center frequency, destructive interference prevents radiation unless the EM modes' frequencies are well matched to the transition frequency. The stronger the coupling, the more marked is this suppression effect and narrower the line width. Even without a frequency selective resonant cavity, the $Q$ factor can be well above $10^6$. Below is a "picture" of Schrödinger equation solution for the relaxing atom photon production. The magnitude of the probability amplitude for the excitation to be in the mode with the frequency shown on the "frequency" is plotted as a function of time. At first, at times smallish compared with the transition time, the amplitude is spread over an extremely broad frequency range; as time evolves, the destructive interference sets in at frequencies removed from the center frequency. Ultimately, the probability for the excitation to be far from the center frequency is very low. 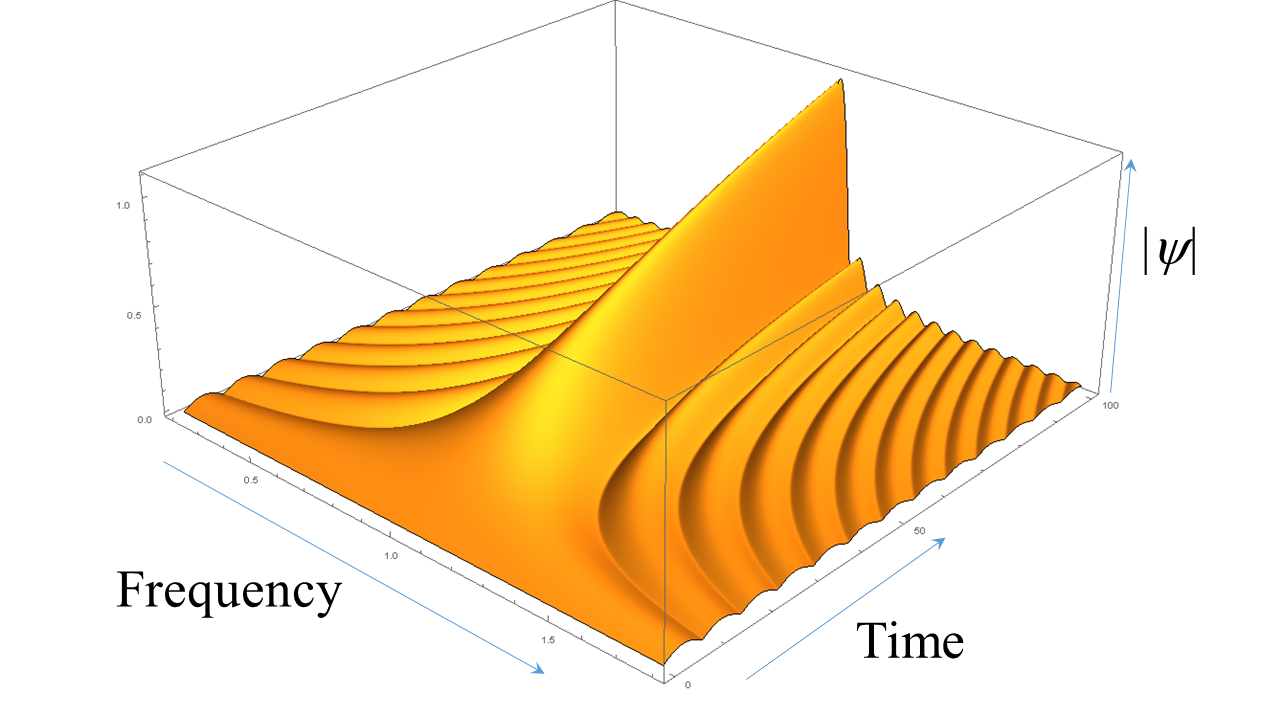 Final $Q$ factors of $10^{12}$ are not outlandish; linewidths of hundreds of hertz are, although specialist, not uncommon for many applications such as distributed fiber sensing and hologram production.

Not the answer you're looking for? Browse other questions tagged electromagnetism electric-circuits laser or ask your own question.

6
Why do lasers require mirror at the ends?

22
Is it possible to observe interference from 2 independent optical lasers?
16
Is the time reversed laser really a laser?
1
How organic impurities in the air affects laser?
13
What laser and BBO are needed to create entangled laser streams?
0
How to classify laser output
0
Safe Laser displays
0
Are the bandwidths of a laser pointer and a sodium-vapor lamp comparable?