A fan is connected to a pipe, what happens to the airflow after the pressure drop?

I am trying to find out what happens to the air flow within a pipe if a fan cannot generate the required pressure to overcome the friction within the pipe.

After much research I am aware that air moves from a point of high pressure to a point of low pressure. Also as the length of pipe increases, the pressure drop due to the friction of the pipe on the air also increases.

So as a working example, assume that I have a fan that has an airflow rating of 1 m3/s and generates a static pressure of 50 Pa. The fan and pipe have a diameter of 30cm and finally the pipe has a pressure drop of 7 Pa/m.

If the pipe has a length of 1 meter, then the air pressure at the end of the pipe would be:

So the air flow would continue past the end of pipe into the surrounding environment.

If the pipe had a length of say 10 meters, then this image gives a clearer idea of what I'd imagine happening with the air pressure:

And because air flow moves from a point of high pressure to a point of low pressure, then there would be no reason for air to flow within the pipe after 7 meters. Since the fan will still be generating 50 Pa, then air will still flow through the fan into the end of the pipe connected directly to the fan.

Clearly I'm not much up on fluid dynamics and physics, so would appreciate a simplistic answer to the question. What am I missing here? 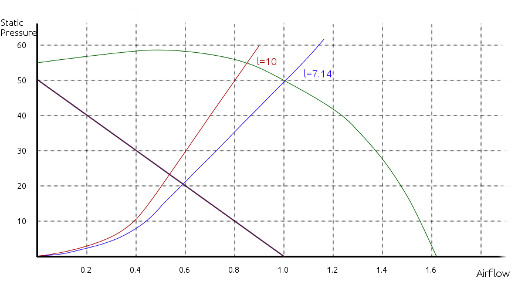 The green line shows the operating curve of a (hypothetical) fan with flow rate of 1m³/s at 50 Pa static pressure. The red and blue lines are the resistance curves of 30 cm pipes with lengths of respectively 10 m and 7.14 m. (based on http://www.arca53.dsl.pipex.com/index_files/619.gif). The intersection with the operating curve gives you the operating point of the system.

For the 10 m pipe, let's assume that the flow rate in the system is 0.8 m³/s. Then pressure drop in the pipe is 50 Pa, and since pressure at the pipe end is zero, the static pressure at the fan outlet is also 50 Pa. At that pressure, the fan can deliver a flow of 1 m³/s, so the flow will increase. Conversely, when we assume an initial flow rate to the right of the intersection point, the pressure required is more than fan can deliver at the given flow rate, so the flow will decrease. In both cases, the system will end up at the intersection point.

Notice that in the region between 0 and 0.5m³/s, the static pressure rises with increasing flow rate. This can potentially cause unstable operation, and fans aren't (or shouldn't be) run in that region. The shape of the curve shown is typical for centrifugal fans with backward curved blades, other types (centrifugal with forward curved blades, axial fans, propeller blades) can have an s-shaped curve (first down, then up, then down again).

At that exact moment, when there is no pressure drop at point A, air will not move at point A. But just before that point there is a point with a slightly higher pressure, so air (and pressure!) will move from there towards point A.

Not the answer you're looking for? Browse other questions tagged pressure air flow or ask your own question.

1
How to calculate the increased pressure drop due to a restriction?
2
Will changing the pipe diameter reduce the pressure head loss?
1
What happens to flow in a constant area duct when there is a pressure gradient?
0
Effect of pipe length with fan
0
Is the pressure in a pipe equal the pressure in the tank?