What does string theory predict for the singularity inside a black hole?

The usual explanation for what's going on inside a black hole goes something like "General Relativity predicts a singularity with infinite curvature, but when matters gets so tightly compressed we should expect quantum effects to become important, so the singularity will probably be blurred". Authors then proceed to say that we need a quantum theory of gravity to answer such things, and quickly abandon the subject.

Well, while we don't have an experimentally confirmed quantum theory of gravity, we do have a speculative one, string theory. What does it say about singularities? Are they smeared out like the books say? Do they remain points (or rings for a rotating black hole) with infinite curvature and density? Do we not know?

According to the fuzzball proposal in string theory, black hole are actually horizonless and regular solutions. For some systems in five dimensions made with bound states of intersecting branes this has been already proved directly in supergravity: there are solutions without horizons and singularities, with the same asymptotic charges (Mass, Angular Momentum, Electric-Magnetic Charge) of the black hole and with a behavior that mimic what you would expect from a black hole (for instance if you scatter a quanta inside this geometry, it takes a very long time for the quanta to get out). This black holes are a kind of degenerate state of matter, but there is not really an "interior": the space cap off near the would-be horizon instead of ending into a singularity. A very strong implication is that quantum gravity physics is relevant even at the would-be horizon scale. No information paradox occurs, since there are no horizons. The singularity is replaced by a smooth (but deep) cap, and the shape of the cap discriminate between different microstates. Basically is the extended nature of the string and the fact that it is oscillating in the non compact space that save you.

The dynamics of these object is still poorly understood and some people (including me) are working to find regular solution in four dimensions. Some solutions with Ads asymptotics has already been found.

The idea fits into the bigger picture of thinking gravity as an emergent phenomenon. In particular the singular black hole is a coarse grained and average description of the underlying microstates in which you trace (you ignore) every detail inside the would-be horizon. Indeed it's only going near one of these object that you can find difference between this picture and the naive one.

The most general and quantum black hole will probably require a full understanding of the non perturbative picture of string theory. But still, if we found fuzzballs in four dimension, this will at least solve the information paradox and describe some possible states for the black hole.

At best things are pretty speculative. Cumrun Vafa has proposed that black holes have condensates of tachyons. In some sense you can understand this without much complexity. The Schwarzschild metric has a physical singularity that is a spatial surface. The Penrose conformal diagram for the Schwarzschild metric illustrates this 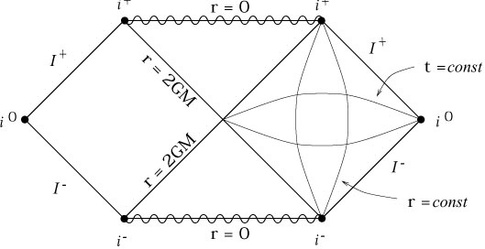 The bosonic string has two tachyon vacuum states. It is then plausible to think of the singularity as a condensate of these states, in a way similar to the condensate state for the Higgs field. If the cosmic censorship hypothesis bears fruit, then it also suggests that odd-ball things like the tachyon do not contribute, at least directly by propagating a causal signal, to physics in the exterior world.

Largely though, this is not well known. With holography we have a theoretical sense that the stretched horizon of a black hole is a lot of strings. In fact if the strings link up the stretched horizon could be seen as one large string. It is not clear how the singularity plays into this. With the Susskind ER = EPR we have the hypothesis that the two timelike patches bounded by the $r~=~2GM$ horizons are regions that have entangled blackholes. In this way the quantum monogamy theorem does not block holography. The entanglement of the black hole with its Hawking radiation, a bipartite entanglement, does no require and entanglement with the interior as an addition. There are no unitary transformation between entanglement types. The entanglement with the interior is an entanglement via wormholes with these other regions. How the singularity factors into this is not well known. If there are tachyons we might wonder how they would play into this.

Not the answer you're looking for? Browse other questions tagged general-relativity black-holes string-theory quantum-gravity singularities or ask your own question.

16
Event horizons without singularities
0
Maximum curvature in a black hole
3
What is the singularity of an actual collapsing black hole?
2
What happens to the masses in the center of two black holes in the moment they merger?
1
When GR is not valid passing the event horizon?