Is water necessary for forming the sedimentary rocks found on Mars' surface?

So, I've just been reading a recent ScienceDaily article, and came across this interesting quote

"Clays form in more neutral, less acidic conditions than the sulfate-rich sandstones we've been looking at," Arvidson says. "Our hypothesis is that if there are clay minerals, the water was less acidic and therefore more conducive to life. The presence of zinc, bromine, phosphorus, chlorine, and sulfur in the Tisdale rock is exciting in that it points toward water moving through and altering the rock, although we have no evidence for clay minerals in Tisdale. Further, the Tisdale surfaces were very rough and we were unable to make use of the Rock Abrasion Tool (RAT) to clean off the surfaces to expose fresh materials.

"Thus, we moved on and are now in the thick of the hunt to find these elusive clay minerals by traversing to other rock targets and making detailed measurements, including making chemical and mineralogical observations of natural, brushed, and ground surfaces. The rock Opportunity is sitting over currently is called Chester Lake and will be our first target in which we will use the RAT to progressively expose deeper and deeper surfaces," Arvidson says.

According to this NASA article sedimentary rock structures have already been found by the Mars Global Surveyor. 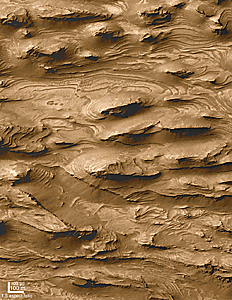 Here's what Dr. Michael Malin, principal investigator for the Mars Orbiter Camera had to say about the origins of the rock:

Malin added, "I have not previously been a vocal advocate of the theory that Mars was wet and warm in its early history. But my earlier view of Mars was really shaken when I saw our first high-resolution pictures of Candor Chasma. The nearly identically thick layers would be almost impossible to create without water."

As an alternative to lakes, Malin and Edgett suggest that a denser atmosphere on early Mars could have allowed greater amounts of windborne dust to settle out on the surface in ways that would have created the sedimentary rock.

So, the most likely explanation is liquid water, but it isn't yet 100% certain.

Not the answer you're looking for? Browse other questions tagged astronomy planets or ask your own question.

3
At what temperature does water become a liquid on Mars? On the asteroids? And in a vacuum?
2
For a planet which has a temperature gradient, hot in the center and cooler on the surface, why do we get absorption lines?
1
How did Mars lose all its surface water?
2
Is drinking water an important feature for finding habitable exoplanets? Has it been found?