Is running in a zigzag helpful in avoiding being shot by an arrow? [closed]

Two people A and B start at a certain point. B runs away from A to another point. A shoots arrows at B.

Is it helpful for A to run in a zigzag rather than in a constant direction? 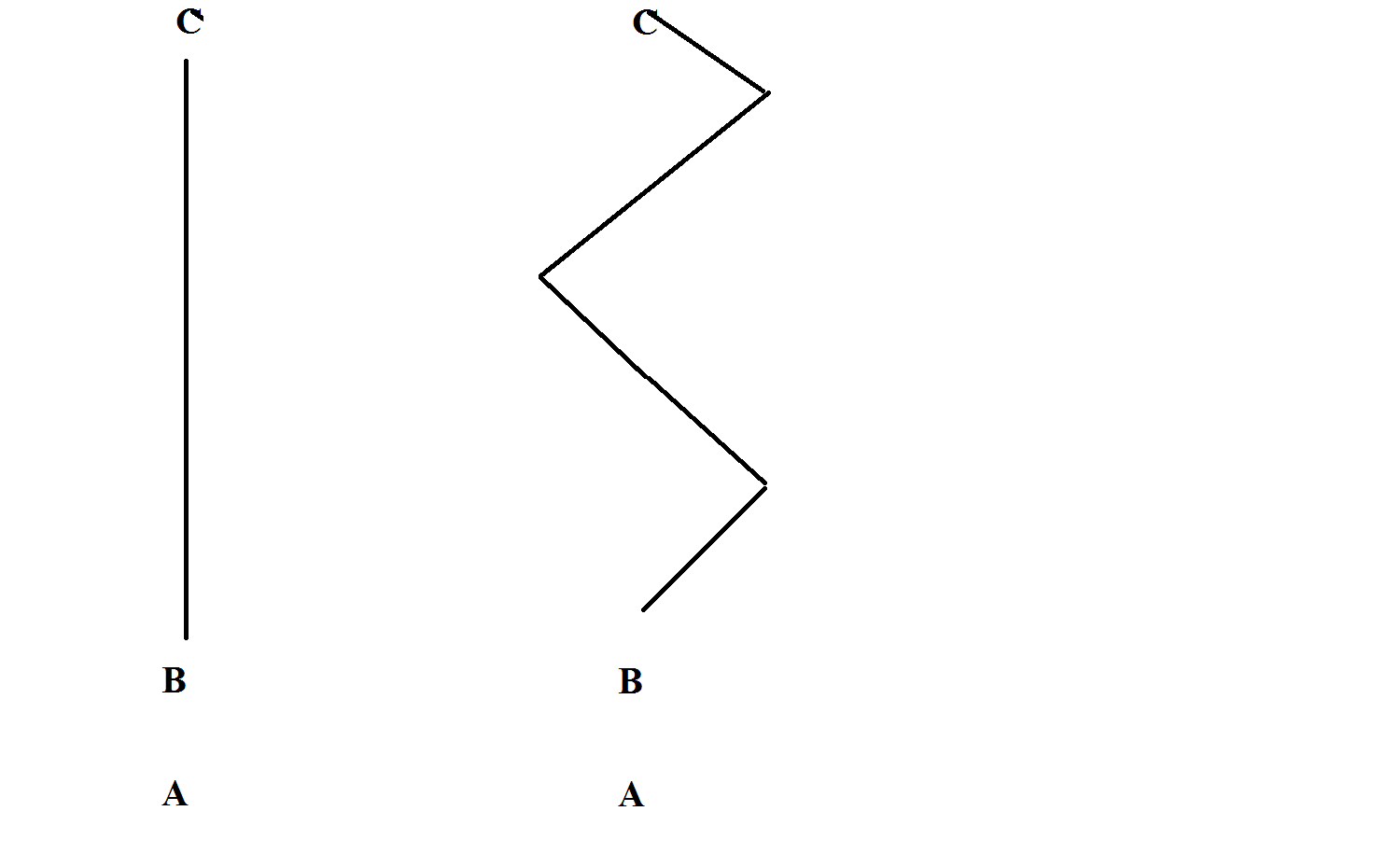 To be more precise:

Under what conditions, if any, is option 2 better than option 1? What might be some other important physical factors to consider?

A clip can be found in the link below

I have read some people saying that if character B

Of course there are some differences in my given scenario and that part of the episode such as not having $a, v, d$ but rather $a_t, v_t, d_t$ which are positive functions.

The advantage of zig-zagging is that it presents a smaller "collision cross-section" both in terms of target area (side-on) and time (an arrow following the runner remains "on target" longer). The advantage of the straight-line path is that it gets the runner out of range in the shortest time. It also minimises the relative speed of impact, thus minimising damage - though in realistic scenarios this is unlikely to be significant.

The question needs further specification, in particular regarding the speed $c$ of the arrows, the time $\tau$ between shots (which includes reloading and aiming), and their range $R$.

I presume that B cannot try to dodge the arrows as they fly. But there are many other factors to consider. For example :
* How much of a head start is B given?
* How accurate (in terms of angular spread) is the archer's aim?
* Does B follow a predetermined zig-zag path known to A (as in your conditions), or are his turns made at random?
* Is gravity to be taken into account? The disadvantage of the straight-line path is then reduced as B gets further from A, requiring the arrow to be aimed away from the target and into the sky.
* What cover is available? Reaching cover might be less risky than getting out of range.
* The relative cross-sections presented by B to hits from the back, side and above. This could include any body armour or exposure of weak points.

Complications could be piled on indefinitely to make the mathematical model more realistic. Judicious simplifications are necessary, as in your model, to avoid unnecessary effort towards spurious accuracy. But without the minimum specifications suggested above ($c$, $\tau$, $R$) it is not possible to decide which strategy is best.

Developing your model : I assume the 'head start' is the time $\tau$ between shots.

I assume that all hits are ultimately fatal. More realistically you could assign a probability of a hit being fatal; if non-fatal it reduces B's speed by a certain factor.

Since B is now slightly side-on to the arrows the target area is smaller by a factor of approx. $\cos\theta$. This assumes that B is a 'cardboard cut-out'. In realistic situations this factor could be ignored, except perhaps for shots from above.

I have assumed that, as for the straight line strategy, B's position $B_1$ when the arrow lands can be predicted by A. If B can change direction at a random time between shots arriving (keeping the same angle $\theta$), $B_1$ will be one of two points reachable from his position $B_0$ when the arrow was released. If angle $\theta$ can be changed also at random (but always $<90$ degrees), $B_1$ will be somewhere on a semi-circle of radius $vT$ centred on $B_0$; $T$ is the time of flight of the arrow. The new value of $\theta$ affects the next shot arriving at $t_{n+1}$. In both cases the uncertainty in position $B_1$ can be included as a further probability factor.

Another refinement would include the effect of gravity on the arrow. This alters time of flight, range and effective target area, which is smaller from above.

Conclusion : In many cases one strategy (probably zig-zagging, especially at random) will be clearly the better one. In some cases which strategy is the better might depend in a very complicated way on the various factors involved. The view that zig-zagging is not always the best strategy is supported in the following article relating to escape from a gunman :

In the Game of Thrones, zig-zagging probably was better, but not clearly so. In the 1st two shots Ramsay seems to be 'toying' with Rickon. In the 3rd he looks more serious. The final shot appears to pierce Rickon's heart. Was that luck or skill? If it was skill, I think Rickon had little chance from the start. Maximising distance from Ramsay (by doing as he did) was probably Rickon's best chance, at least until Ramsay started to take the 'game' seriously. Ramsay would have relished the challenge of hitting a zig-zagging target. Whatever Rickon's strategy, Ramsay would not have allowed Rickon to get so far that he had a significant chance of surviving.

I think the best strategy for Rickon was to mix strategies : first run directly away, then zig-zag as the shots got closer to target.

Not the answer you're looking for? Browse other questions tagged newtonian-mechanics gravity kinematics projectile popular-science or ask your own question.

8
Why does a small object stay in one place after being shot from a big gun?
7
Zeno’s Paradox of the Arrow
1
100 lbs of drag? Really? Chain running physics
0
Are more wheels helpful?
5
Spin Shot Pool Physics
1
How fast will bullet hit the ground if it is shot vertically?
0
Should not the acceleration acting on the stone being dropped be $a$ as well along with $g$?