“Every action has an equal and opposite reaction.”

I have a query about the word every in that sentence.

Suppose we have two objects A and B. A pushes B with a force of 5N and B will push A with a force of 5N. However, won’t the reaction that B has caused on A, serve as an action for A, causing A to again push B with its reaction and thus making a total of 10N? (And then, of course, B will also apply a force of 10N on A.)

The way we are all taught Newton's Laws (by reciting them like mantras as children) is unfortunate because the traditional wording is misleading in many ways.

A big problem (though not the only one) with the traditional wording of both Newton's second and third laws is that they incorrectly suggest cause and effect (and hence imply a chain of events, as you put it).

Newton's second law, for example, suggests that a force 'causes' an acceleration, implying it happens first. It doesn't. The force and the acceleration occur jointly and concurrently, despite the persistent misconception and stubborn illusion of a temporal sequence.

But let's not get distracted with the second law right now, because you are understandably perplexed by the third ...

Again, the wording of the third law suggests that an 'action' happens first and then it 'causes' a 'reaction'. If this were literally true, you'd have every right to cry infinite regress!

The truth is, the forces occur jointly and simultaneously, and are not the causes of each other. If you want a better way to think about it, you can hardly do better than the way Newton himself came up with the third law. He argued for it as follows:

Suppose you had a system of two objects interacting with each other, with no external forces acting on the system. Then you should be able to consider that system as a 'whole' if you want to, and from that perspective the system as a whole must not accelerate as it has no net force acting on it. But this can only be the case if the two objects making up the system have equal and opposite forces between them (i.e. all internal forces of the system must cancel out).

Do you see how this argument does not involve any 'causal sequence' or 'chain' of forces? It is just an observation about what must be the case in order for Newton's force-based scheme to work consistently.

Not convinced? Let me try an analogy. You and your friend each have a certain amount of money. You buy something from your friend. Your balance goes down and your friend's goes up. Was there a time-delayed causal sequence here? Nope. Your balance decreased concurrently (as you handed over the money) as your friend's balance increased. Looking at the system as a whole, we know that since no money flowed into or out of the system during the transaction, the net balance must be zero. Every payment entails a receipt and every receipt entails a payment, but, despite the illusion, there is no sequence (much less a perpetual one!).

Note: You could also translate this argument into the language of momentum conservation, but I have tried to answer the question in the same language in which you phrased it.

UPDATE: The 'infinite regress' problem highlighted here is not the only confusion that arises when we use the suggestive language of 'action' and 'reaction'. I've identified two other problems this language causes along with my proposed solution here.

It does not matter which one you call action and which one reaction, what the law says is that two objects make the same force on each other. Thus if A pushed B with a force of 5 Newtons, B will also push A with the same force.

You need a better statement of Newton's Law. The one you are using is meaningless, because the word action is not defined. (In today's language of physics the word action is used in an entirely different context, sense, and meaning.) It's based on what Newton wrote, but is only half of what he wrote. Wikipedia gives us the whole thing

To every action there is always opposed an equal reaction: or the mutual actions of two bodies upon each other are always equal, and directed to contrary parts.

But this statement still has the archaic language. We need to stop repeating Newton's use of the word action. It means nothing to us today.

I intended to find a link to a good version of the law. I could not find one. I'm sure there are good ones out there, but a quick search came up with a bunch of bad ones, almost all of them using the words action and reaction. Here's a version based on the statement of the law in the book "Integrated Science" by Tillery.

But no matter how it is phrased, it needs explanation and elaboration. The short statements of the law are not good ways to learn what the law is about. Hyperphysics (scroll to the bottom) does a pretty good job explaining it.

You're assuming "action" and "reaction" are the same things. Ok, there are lots of reasons why we might consider them to be either similar or exactly the same, but since the third law doesn't say "for every action there is an equal and opposite action", the third law is logically consistent.

For the purposes of the third law, reaction is NOT the same as action.

This might sound like a bit of a linguistic, rather then physical, argument, but the third law is motivated by the form of our analysis. We develop interactions as forces, and then we ask what happens under action of those forces. Well, for every force we 100% know exists ("me pushing on the wall"), the third law tells us that there is another, reactionary force ("the wall pushing on me"). "reaction" is a kind of force, not a name for all forces.

How about considering a specific force, such as the Newtonian gravitational force between two point masses $m_1$ and $m_2$. We could write the force that mass 1 exerts on mass 2 as follows:

If you want to consider EVERY so-called action, then you need to consider different forces, keeping in mind the idea of \it{force} being classical.

Regarding (re)action, which force is exerted "first"? I don't think one can say. As mentioned in other answers, the wording is unfortunate and misleadingly.

Note that Newton's Third Law is often (re)stated as follows:

Forces come in equal and opposite pairs.

I might be a little late in answering this question, but I hope it'll help.

Let me explain why these two forces happen simultaneously, with that knowledge you will understand why the reaction force(so called) does not act as yet another force. To understand this we must understand what causes a force.

A force is always caused by the interaction of two bodies.(We are not considering fictitious forces here) These two objects can be touching each other or may be some distance apart(Eg - gravitational force)

Taking your example, how would A have exerted the force of 5N, upon B? Possibly, A was in motion (relative to the earth) previously and would collide with B, thus exerting the force. (It is easy to visualise A as your hand and B as some object)

It is these two forces that are popularly regarded as action reaction force pairs.

If there is a certain force in some direction, the existence of another force is unavoidable( in the opposite direction, acting on the object which caused the force, to which we referred to first) Which is to say forces exist in pairs. Now, relative to A, it is B that exerts the force, So, relative to A, the action is the force exerted by B upon A.( Let's call it F1) Even as this action takes place relative to A, relative to B yet another action takes place. ( force exerted by A upon B, F2) For A, The action is F1. At the same time F2 is also exerted. For A, F2 is an indirect consequence of the collision. It can be considered to be the reaction force relative to A. ( The term "reaction" is not really suitable, but that is the commonly used term) Likewise For B, F1 is the indirect consequence; reaction. The creation of a whole new force as a reaction is not what Newton meant by the third law. So, every action has a reaction, as stated by the third law 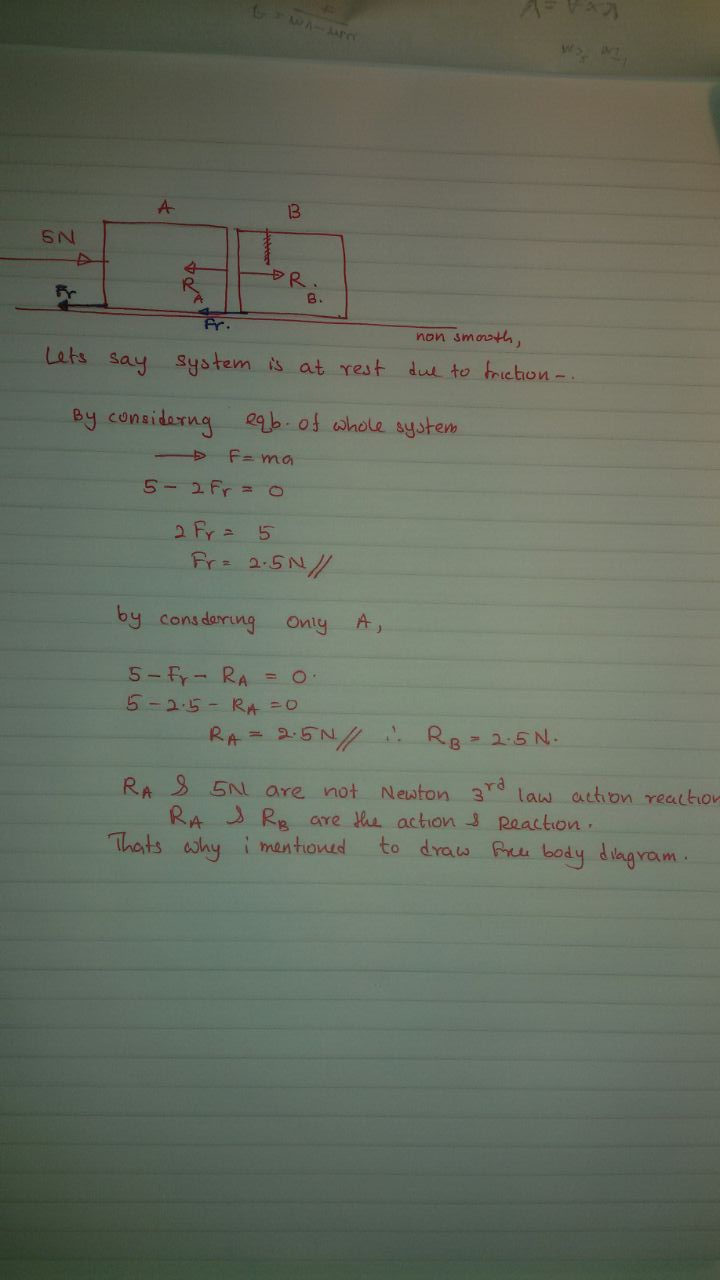 It should be "Every action has equal and opposite reaction of SAME TYPE" , the best way to understand these contact force related questions is to draw a large clear free body diagram. Which will eventually lights up your problems.

Draw all possible forces on both object(s) and or contact surface.

If you are concerning about the reaction force due to 5N force applied on the object A , it will be acting on your hand which is still 5N acting opposite direction. Also to clarify your concern, newton pair of force always acts on different bodies not on the same body

44
Newton's 3rd law... hitting drywall (which I break) vs hitting a brick (which breaks me)?
11
The relativistic principle of causality