Do energy levels such as $E_c$, $E_v$ have negative values in semiconductors?

In energy band diagram of a semiconductor, do energy levels such as $E_c$, $E_v$ have negative values?

Also, why electrons in semiconductor have energy?

What is the formula for energy of an electron? 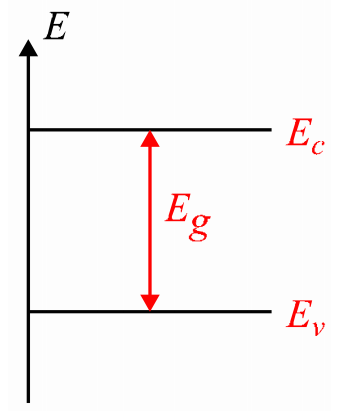 The values of $E_c$ and $E_v$ in the band diagram depend on the point of reference. So yes they can have negative values if you chose your reference that way. Keep in mind that their difference $E_g$ stays constant nonetheless.

Electrons are fermions and therefore governed by Fermi-Dirac statistics. That means that they have to comply with the Pauli principle. The distribution function reads:

This equation in this very form is only valid for semiconductors in equilibrium. $E_F$ is called the Fermi-level and determines where the turning point of the function is. In the following figure the Fermi level would be at 5 eV. 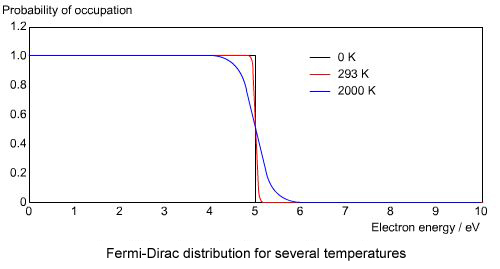 In an intrinsic semiconductor (=no doping) the Fermi-level typically lies in the middle of the bandgap.

The Fermi-Dirac distribution gives the probability that a state at a certain energy is occupied by an electron.

States are allowed combinations of energy, momentum and spin the electrons can occupy. The distribution (in terms of energy) of such states in the semiconductor is described by the Density Of States (DOS) $D(E)$, which depends on things like the lattice structure and binding energy. In the bandgap for example are no such states, which is why electrons can simply not be there.

These states are simply bound states in the semiconductor lattice, which is why electrons have energy. If you solve the Schrödinger equation for a periodic potential (see Kronig-Penney model and Bloch functions) you will get certain energy eigenstates.

You can for example now calculate how many electrons are in the conduction band.

Since the description of electrons in semiconductor heavily depends on statistics it makes no sense to ask for an equation for the energy of a single electron.

I hope this answers your questions!

Not the answer you're looking for? Browse other questions tagged quantum-mechanics energy potential semiconductor-physics electronic-band-theory or ask your own question.