I tried to search, but I can find only formulas/laws without a description how does it happens in 3D space, step-by-step with drawings/schemas/simulations.

This is an interesting question. If you have two isolated atoms (and they don't need to be $\mathrm{H}$) in the gas phase moving towards one another and colliding, is quite straightforward as we are in the situation that total energy is conserved. If we assume that one atom is stationary, it then is easier to describe what happens and makes no difference to the answer.

As there is no barrier between the reactants and products, the initial kinetic energy is converted into potential energy of say $\mathrm{H_2}$ (I am ignoring effects of centrifugal barrier for the sake of simplicity). The atoms move together until they reach a minimum separation caused by their mutual repulsion. (This is not the equilibrium separation but shorter than this.) At this point they now move apart again.

The reason for this is that in this isolated situation total energy is conserved; all that happens is that the kinetic energy is converted into potential energy of the molecule, but them as the atoms repel one another they are still above the dissociation energy of the molecule and so fly apart. Actually, they were always above the dissociation energy for them to move together in the first place.

The figure shows a one dimensional cut through the spherically symmetric potential energy surface, which is appropriate as we deal with atoms. (If an atom reacts with a diatomic then a 2D contour plot is needed). The energy profile is shown in the diagram. 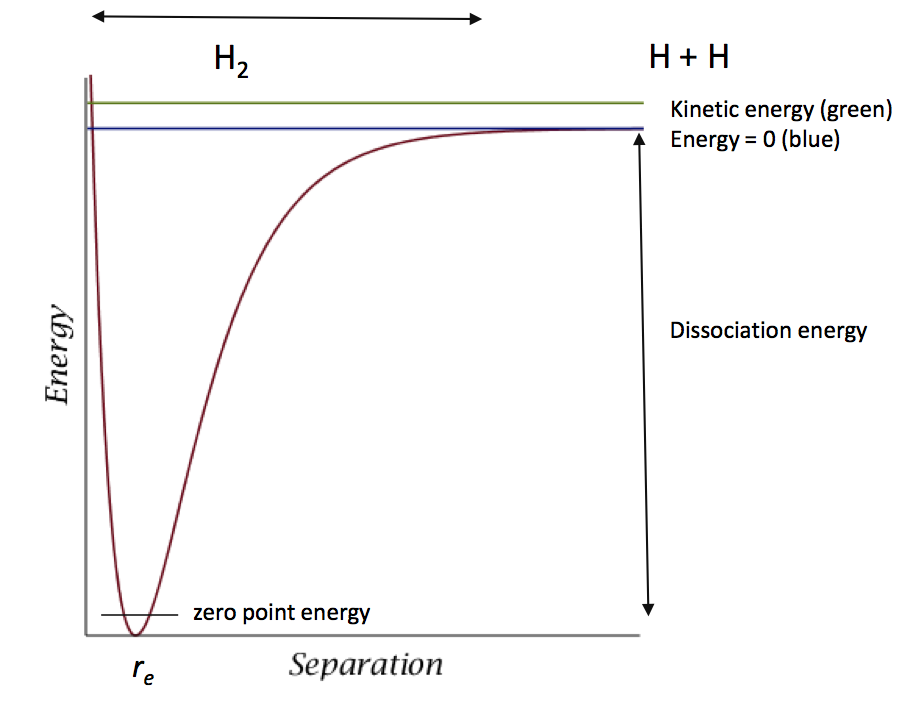 The initial kinetic energy is the energy of the green line above zero which we take as the energy of the two atoms when distant from one another. As the atoms approach the red line shows the potential energy which increases (in the negative sense) as the molecule forms and the potential is attractive to larger separations that $r_e$ the equilibrium internuclear separation and repulsive at shorter separation. Only the zero-point vibrational energy level is shown.

The kinetic energy rises as the potential energy falls, as total energy is constant, and mirrors the potential energy. When the inner repulsive energy is reached then the two atoms now start to move apart. The time for this approach and separation across the potential well, is approximately half a vibrational period, so typically a few femtoseconds up to about $0.1$ picosecond at most) depending on the atoms ($1\,\rm fs = 10^{-15}\, s$). This is shown by the top horizontal arrow. Not much can happen in this time. The $\mathrm{H_2}$ cannot radiates if it is in its ground electronic state because of radiation selection rules, but $\mathrm{HI}$ could do this and emit an infra-red photon. However, the chance of this happening is vanishingly small as the radiative lifetime in the infra-red is vast compared to the vibrational period. (If the kinetic energy is so large that excited states are produced fluorescence may occur, but again the chance is very small for the same reason.)

For the situation you've outlined, yes, the only way for the two atoms to form a molecule is via the emission of a photon. This is known as 'photoassociation', which isn't very common (although its reverse process, photodissociation, is much more frequent).

In the absence of a radiative energy sink, no associative processes are possible, and this helps to underline a misconception in the way you set up the question:

We collide them with precisely enough energy to form molecular hydrogen (H2).

There is no such energy! If you have two hydrogen atoms, then by definition they have positive energy, but the bound states of the system have negative energy, i.e., they do not have enough energy to form two free hydrogen atoms at infinity. What you've proposed is a scattering process, and unless there's somewhere to put that energy difference, the atoms will retain their initial positive energy, and end up breaking up and remaining as free atoms.

In a real-world cloud of atomic hydrogen, the atoms will quickly associate into diatomic hydrogen molecules, but they rarely do so via the route that you've specified. Instead, in most gases in the laboratory, the crucial process is three-body collisions: these are (obviously) much less frequent than two-body collisions, but they allow for associative processes where two of the atoms join up into a bound molecular state and dump the energy difference into the kinetic energy of the third atom: $$ \rm H+H+H \to H_2 + fast \ H $$ (That said, the relative importance of this process depends critically on the density of the gas, and if the gas is too dilute, then this process won't happen. Indeed, you don't necessarily have any guarantee that any association process will happen meaningfully. This is particularly important in cold-atoms BEC work, where many of the experimental conditions are designed to keep associative processes at a minimum (including keeping the cloud very dilute, so that the low density inhibits three-body collisions).)

Now, to dig into the specific questions posed in the current bounty:

Similarly, there's essentially no way to produce photoassociation (i.e. radiative disposal of the energy excess) other than through electronic excitations $-$ the nuclei just aren't that optically active. Thus, you expect photoassociation to depend sensitively on the energy of the incoming nuclei: if it matches that of an electronic excitation of the bound state (with some considerable leeway, though, since there's a significant energy span of bound states from the rovibrational ground state all the way to threshold) then you expect this resonance to have a higher signal.

From a (brief) look at the literature, I don't get a sense that the photoassociation of hydrogen has been the object of much attention, but it does have some literature dedicated to it (most notably A.P. Mosk, "Photoassociation of Spin-Polarized Hydrogen", Phys. Rev. Lett. 82, 307 (1999), from what I can tell). The reaction $$ \rm H+H \to H_2 + \it some\rm\text{ form of energy} \tag 1 $$ is obviously of clear importance to astrophysics, so there's bound to be a huge literature about it, and the array of possible conditions of interest is much too broad for a Physics SE post (particularly once you introduce dust grains that can act as catalysts and as third-bodies that can absorb the extra energy).

As regards actual astrophysical environments, and how the astrophysical literature views the reaction $(1)$, from what I can tell, V. Pirronello et al. offer a good summary ["Formation of Molecular Hydrogen: The Mother of All Molecules: An Experimental Investigation", in Exobiology: Matter, Energy, and Information in the Origin and Evolution of Life in the Universe, J Chela-Flores & F Raulin (eds), Springer, Dordrecht, 1998)]:

The problem of the formation of molecular hydrogen arises from the fact that such simple molecule is not efficiently formed by the direct reaction of two hydrogen atoms colliding in the gas phase. This is a consequence of the fact that the protomolecule, just formed in a high vibrational level, has to release quickly (roughly in a time comparable with its vibrational period) an energy excess of about four and a half electronvolt (or at least a good fraction of it) to became stable. In the gas phase such a proto-molecule is isolated and the only way to achieve this goal is through the emission of a photon; this process is however quite slow because involves roto-vibrational forbidden transitions and the usual unavoidable result is that the two hydrogen atoms restart wondering in the cloud. This mechanism, that is important at the early stages of the universe for the formation of primordial molecular hydrogen, is inside already developed galaxies unable to explain the observed abundances of H$_2$. It was then proposed already decades ago (Gould and Salpeter, 1963; Hollenbach and Salpeter, 1970; Hollenbach, Werner and Salpeter, 1971; Williams, 1968) that a three body reactions (with the third one taking the excess energy) would have been the way to overcome the problem. In the interstellar medium, due to the low densities involved ($n_\mathrm H$ of the order of $10^2 \:\rm cm^{-3}$, in the so called "diffuse clouds"), the third body cannot be another atom, not even H that is the most abundant, but it must be a dust grain.

The series of processes that have to occur are: collision and sticking of two H atoms with a grain of interstellar dust, mobility of both of them and, upon encounter, recombination with formation ofH2 and in most of cases release in the gas phase.

Not the answer you're looking for? Browse other questions tagged thermodynamics physical-chemistry or ask your own question.

1
Where does the energy that release when bond is formed between two atoms come from?
2
Reason for thermal motion
2
How to simulate the formation of chemical bonds by calculating electrodynamic forces?

0
Correlation energy - is it the difference between the Hartree-Fock energy and exact energy, or Hartree-Fock PE and exact PE?
1
Chemical bond and virtual particles
3
How is temperature related to quantum vibrational states of molecules?
4
What mechanism at the microscopic level determines whether a system heats up or not?
1
What is the energy of an atomic orbital?
1
Time evolution of molecular signal from a laser-induced plasma - finding the right model for my data
0
On an atomic level is energy only transferred through phonons and photons?
2
Thermometers respond only to translational kinetic energy: misconception?