How do we know that an electron “spins”?

As far as I know, you can't necessarily isolate an electron to observe it, you can only observe its effects on other particles due to fields. Moreover, we can't know an electron's exact location or how much space it occupies, although it has finite mass. It seems that the general model for the electron is either a wave or a rotating spherical particle. Being that we can only observe its mass/energy, how do we know that it is spherical and that some energy comes from a spin?

Edit: We have extensive comments on how the electron may not actually be spherical, and those models are purely for visual purposes. However, I am still wondering how someone determined that an electron spins. The Stern-Gerlach experiment was mentioned, but when I read up on that it seems that it is not a good experiment for charged particles as they will interact with the field.

The Stern–Gerlach experiment involves sending a beam of particles through an inhomogeneous magnetic field and observing their deflection. The results show that particles possess an intrinsic angular momentum that is closely analogous to the angular momentum of a classically spinning object, but that takes only certain quantized values.

We know from this experiment that a spin has to be assigned to the electron.

It is conservation of angular momentum that demands an intrinsic spin.

The study of particles and resonances and their decay and interaction channels definitely showed that there were groupings, certain reactions were found and measured and others were not observed at all . The assignment of spin explained why some reactions were allowed and others not. The very existence of the neutrinos depended for years on conservation laws, including angular momentum conservation.

Spin assignment also revealed the allowed SU(3) representations classified according to spin that led to the symmetries and the quark model. 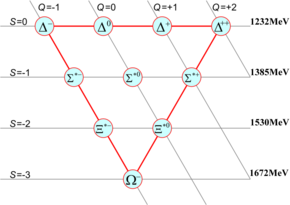 A combination of three u, d or s-quarks with a total spin of 3/2 form the so-called baryon decuplet. The lower six are hyperons. S = strangeness, Q = electric charge

Electrons And Spin From Scientific American

Unfortunately, the analogy breaks down, and we have come to realize that it is misleading to conjure up an image of the electron as a small spinning object. Instead we have learned simply to accept the observed fact that the electron is deflected by magnetic fields. If one insists on the image of a spinning object, then real paradoxes arise; unlike a tossed softball, for instance, the spin of an electron never changes, and it has only two possible orientations. In addition, the very notion that electrons and protons are solid 'objects' that can 'rotate' in space is itself difficult to sustain, given what we know about the rules of quantum mechanics. The term 'spin,' however, still remains."

We don't need to separate electrons out in order to observe them. The structure of an atom, as revealed in electron transitions (atomic spectroscopy) is clearly based on orbitals at specific energy levels, with a two-electrons-per-orbital limit. And, the collective behavior of unpaired electrons that gives rise to ferromagnetism, and subtle spectroscopic effects like spin-orbit coupling, are calculable. Those observed effects are verifications of the spin properties of an electron.

An electron need not be considered spherical, however; in an atomic orbital, at any rate, only zero-orbital-angular-momentum electrons are spherical. Those are the so-called S orbital states, but P, D, F orbitals haven't got spherical symmetry.

Not the answer you're looking for? Browse other questions tagged particle-physics experimental-physics angular-momentum electrons quantum-spin or ask your own question.

22
How does one experimentally determine chirality, helicity, spin and angular momentum of a fundamental particle?
10
Measuring the spin of a single electron

3
Reaction force in electron spin measurements
1
What is the spin of an electron along the x-axis?
33
Why can interaction with a macroscopic apparatus, such as a Stern-Gerlach machine, sometimes not cause a measurement?
0
Does the electron spin interact with the gravitational field?
5
Does electron have some intrinsic ~$10^{21}$ Hz oscillations (de Broglie's clock/Zitterbewegung)?
0
Spin of an electron (What is the meaning of spinor in terms of Hilbert space and Euclidian space?)
1
Understanding some experiments based on the Stern-Gerlach experiment
2
How is the spin of an unstable meson or baryon measured?
3
How does Stern-Gerlach experiment lead to conclusion of electron's spin?