I am having some difficulty understanding the Pound-Drever-Hall frequency stabilisation technique, when locking a laser to a stable cavity.

As far as I understand:

This is where my understanding breaks down. Why mix this signal with the modulation frequency? I would have expected you to mix the output signal with the initial laser signal, such that the shift in phase could be determined and hence accounted for.

From what I've read, the two different frequency signals produce the beats phenomenon in the mixer, with an internal frequency (f0 + fm) and the envelope/amplitude frequency (f0 - fm). This is low-pass filtered to keep the (f0 - fm) component, and this is the error signal needed to correct the frequency emitted to correctly match the resonant frequency of the Fabry-Perot cavity.

But we want the error signal to be the difference between the resonant frequency and input frequency. I don't understand why we have used the modulation frequency/sidebands at all! Please answer using similar level of language as I have used here. I have attached a schematic of the Pound-Drever-Hall system from Wikipedia below.

Many thanks in advance! 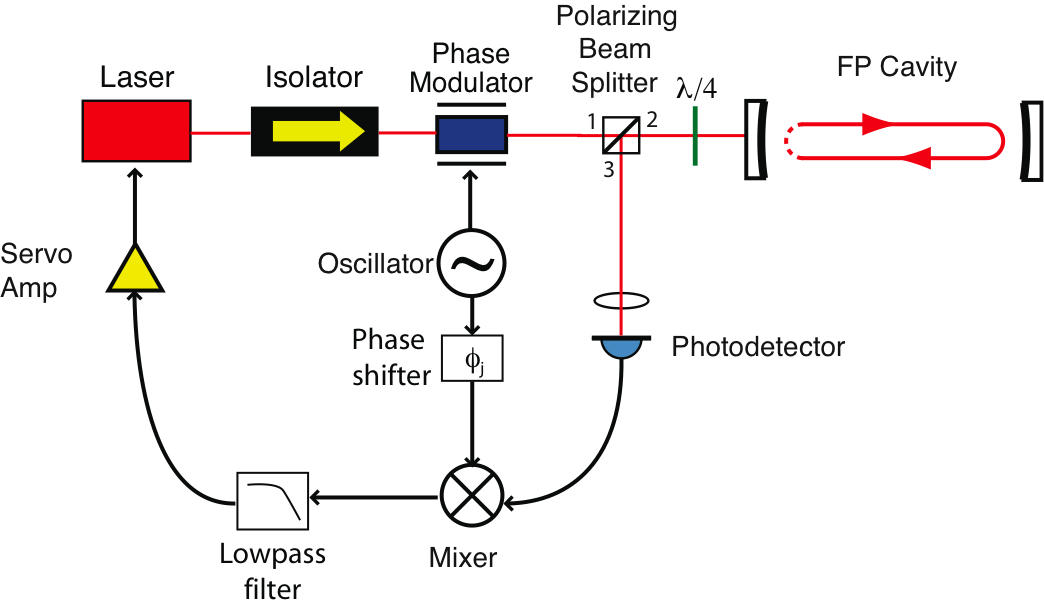 As sa101 has pointed out, what you are proposing is a sort of homodyne technique where you measure the phase of the transmitted beam using a local oscillator laser beam and utilize this to determine the detuning of the laser beam relative to the cavity. If that were the idea of the technique then you would be correct that modulation and demodulation would be unnecessary. But, as sa101 also points out, this phase shift would be highly sensitive to path length fluctuations in the two arms. This would greatly decrease (or even eliminate) any sensitivity to the actual lineshape of the Fabry-Perot cavity.

Pound-Drever-Hall is close to what you suggest but a little different. The sidebands are very important to the technique. The carrier and sidebands both enter the cavity and exit with some amplitude and phase shift depending on the relative detuning between the carrier, $f_0$ and cavity resonance. For example, If the carrier is right on resonance then the two sidebands lie evenly on either side of cavity resonance so they are both attenuated in amplitude equally. If the carrier is slightly detuned from resonance you can imagine one sideband will be close to resonance and the other will be further meaning that one of the transmitted sidebands will be larger than the other. We see that the amplitude of the sidebands carries some information about the detuning of the laser from the cavity (in fact, just the amplitude is enough to determine the detuning but the technique is more sensitive and convenient if you also utilize the phase information).

The two sidebands also pick up different phase shifts depending on their respective detuning. Let's now think about detection. All three transmitted beams, the carrier and both sidebands, are now directed onto a photodetector. The intuitive picture here is that these three beams all mix with eachother. In particular, the carrier mixes both of the sidebands from $f_0 \pm f_m$ down to $\pm f_m$. We see that both of the sidebands get mixed down to $f_m$. Whether the signals in the two sidebands add, subtract, or some undergo some other complex interference depends on the relative phase of the two sidebands (as determined by their transmission through the cavity). If the phases are all right (see wikipedia article) the signal at $f_m$ will be difference of the signal in the two original sidebands. if $f_m$ is smaller than the cavity linewidth then you can convince yourself that the difference of the signal in the two sidebands should be sort of like the derivative of the cavity transmission lineshape. The final step is demodulation at frequency $f_m$ to bring the signal mixed signal at frequency $f_m$ down close to DC so that we can get an error signal on which we can perform feedback.\

Hopefully this answer will help you a bit with your understanding of Pound-Drever-hall.

"does the shift directly depend on being above or below resonance?"

Phase of reflected light will depend on which side of resonance laser is(check out cavity phase response).

"I would have expected you to mix the output signal with the initial laser signal, such that the shift in phase could be determined and hence accounted for."

You could in theory do it the way you suggested without modulation, but there is an issue. You have split laser in two arms. One arm goes to cavity, reflects back and you overlap it than with second arm(original laser). It is basicaly Mach-Zender, where is one arm you put cavity. you could figure out phase shift from cavity. But the problem is that the phase shift will also depend on arms length mismatch. So you will have to have extremely stable path length from laser to cavity, which is not so easy. Much easier is to use same path for reference beam(sidebands) and $f_{0}$. just have the reference light off resonance such that it is not affected by the cavity. This way when length from laser to cavity changes both reference and $f_{0}$ will be shifted, so the difference(shift by cavity) is not affected

3
What is 'tilt locking' of a laser cavity?
2
Frequency modulation in laser locking - what frequency?
2
In a laser, why are modes near the resonance frequency favored?
3
Radiation Pressure Noise in Gravitational Wave Detection
3
Sidebands, cavity tuning and detection in interferometric gravitational wave detectors
0
Is there a beating note for a sideband modulated laser beam?