I am reading about the Special relativity and the original Einstein papers from 1905 and 1920 where he derives the Lorentz transformation and the effects of the time dilation and space contraction from geometrical calculations.

I am thinking about the following paradox. Now, if frame B is moving with respect to frame A with velocity $V$ in the x axis then $L_a' = L_b \gamma$ and $dt_a' = dt_b / \gamma$, where $L_a$ and $dt_a$ are lengths and time intervals observed from A, $\gamma$ is the Lorentz factor.

Ok, but what happens if instead of linear movement of B with velocity $V$ in one direction we have movement back and forth on $x$ and $-x$ with respect to A with the same velocity $V$? Something like oscillator or circular movement. Half the time B is moving with $V$ in $x$ and the other half of the time in $-x$. I suppose that solution will be the same? But the paradox is that if B is moving very rapidly back and forth it can appear not moving at all when observed from A. Even with the original "mind experiment" of Einstein with two light beams going from A to B and back we can choose A and B in such a way with such distances from A to B that when the beam reaches back A, B will appear at rest. But according to Einstein all reference frames are the same. Also there are possible some middle case when a body appear to be moving with $V$ but this is actually composed from two speeds $V = V_1 - V_2$, in $x$ and $-x$. Then which velocity will be used in the Lorentz transformations?

I sorry but I can't explain this better. If this "velocity paradox" exist somewhere I would like to know how it is called and how it is explained. Is there some simple answer? (I am interested in the final solution)

This is a simple variation on the so called "Twin Paradox", which is not a paradox in the logical sense (i.e. not a logical contradiction). Each cycle of the oscillator's motion is like the journey of the spacefaring twin. One possible cycle on a spacetime diagram is drawn below (source: Wikipedia "Twin Paradox" Article with my own additions). 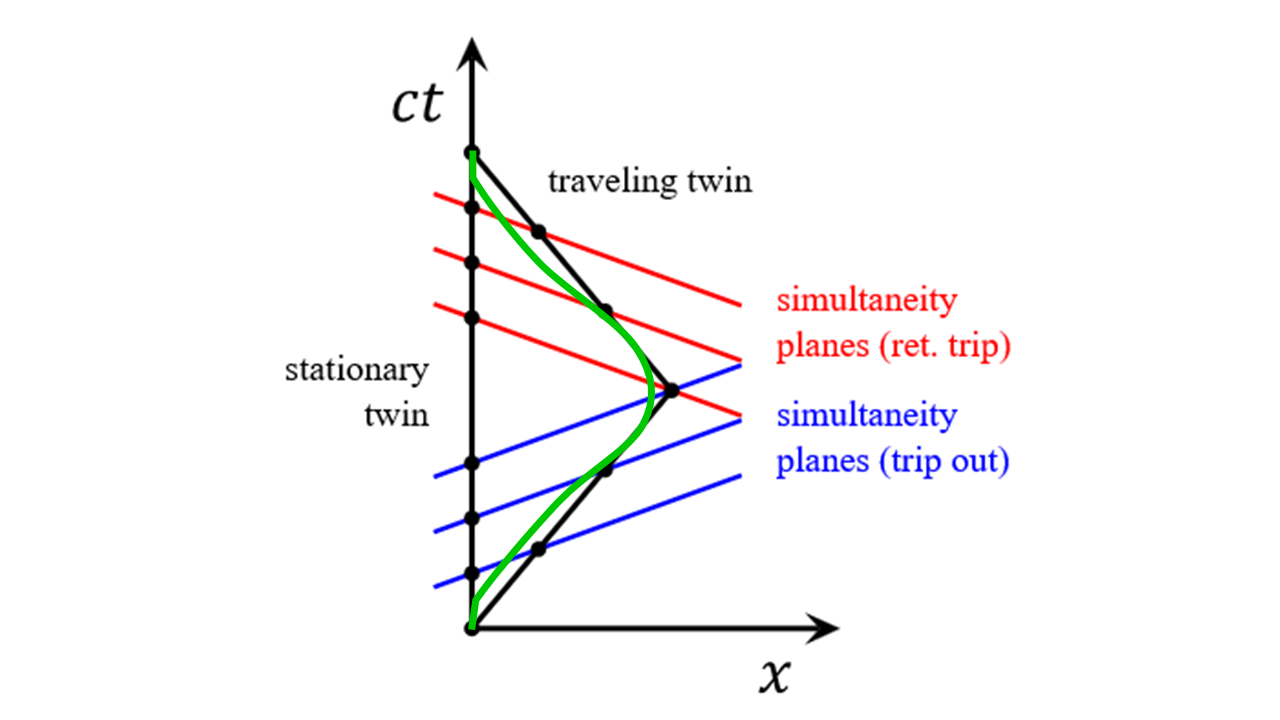 The idealized path, where the oscillator accelerates at infinite acceleration to change its velocity from 0 to $+V$ then from $+V$ to $-V$ is shown in black. The actual path would be more like the green one, but the principles are the same, namely, that, because the motion is accelerated, there is a different Lorentz transforms between the Earthbound twin's inertial frame and the frames momentarily comoving with the accelerating twin at each point on the path, possibly a different transformation at each point. In the idealized case, there are only two momentarily comoving frames, that moving at $+V$ relative to the stationary observer and that moving at $-V$ thereto. On the green curve, the spacefarer would smoothly pass through all intermediate momentarily comoving frames as well.

In summary, no one Lorentz transformation transforms between the two observers' co-ordinates; a different one applies at each point on the oscillator's world line.

.... Also I am not arguing which frame is moving wrt which, as is the case with twin paradox. I believe that it is easier to be realized as real experiment. I am sure that any experiment will show that the oscillating clock will delay and this delay will not depend from the frequency of oscillation but only from velocity.

You asked which velocity is used in the Lorentz transformation, and the answer is that there is not one transformation but a smoothly varying set of Lorentz transformations between the at rest observer and every inertial frame momentarily comoving with oscillator at each point on its world line. If you want to know the time dilation to check the plausibility of an experiment, then that's easy: if the path is sinusoidal such that $z = a \sin(\omega\,t)$ then the line element is

(You can easily do this integral with complete elliptic integrals if you need to broaden it to near light speeds). So let's say you have an atomic clock oscillating back and forth such that $a=1{\rm m}$, $\omega = \pi{\rm m s^{-1}} \approx \sqrt{g}{\rm m s^{-1}}$, equivalent to a period of about $\frac{1}{2}{\rm Hz}$ (Inertially induced stresses on the instrument of $1 g$ seem reasonably manageable so that we can get rid of or account for stress induced errors in the clock system). Then each second (half period), the oscillator's clock "loses" $\pi^2/(4\,c^2)$ seconds, amounting to $2.7\times 10^{-17}$ seconds. This is equivalent to about a nanosecond every fourteen months. So it would be well measurable with today's technology; let's assume we're really good experimentalists and we can design a clock which would withstand the stresses from $10\,g$; in this case, we'd cut that figure down one hundredfold, so the difference is 1 nanosecond every four days. Given these figures, I'd be surprised if the experiment had not already been done.

An oscillation frame as you described it is not an inertial frame of reference, so Lorentz transformations do not apply here.

Not the answer you're looking for? Browse other questions tagged special-relativity reference-frames velocity oscillators angular-velocity or ask your own question.

0
A Paradox in Special Relativity
6
Right-angle lever paradox in special relativity
0
Einstein on a train paradox: what's the resolution?
2
Can angular momentum not be conserved in a straight line motion?