Why monochromatic waves exist even theoretically

I was reading this question. Where the author made a statement that

I also believe that the statement (as I have quoted above) given by the author should not be correct but can not figure out why it should be wrong.

My question is: what physical property of the wave prohibit the multiples of time period to be taken as the time period of wave, and if this statement is not true what prevent the presence of sub-harmonics in that wave.

How do you know that a monochromatic wave of frequency $\omega$ doesn't contain any component at $\sqrt{2} \omega$? It's because these two frequencies are not commensurate: if you plot $\sin(\omega t)$ and $\sin(\sqrt{2} \omega t)$ they'll have no clear relation. The peaks of one look like random points in the other. Then it's clear their overall overlap must be zero. 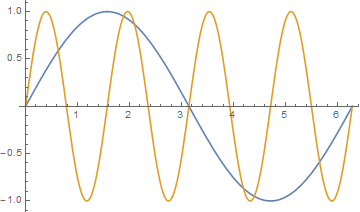 Physically, if you had an ideal oscillator with resonant frequency $\omega / 4$, and imposed an external force like $\sin(\omega t)$, you'd be pushing it the 'right' way and the 'wrong' way half the time, so the oscillator doesn't do anything.

Mathematically, this occurs because sinusoids are orthogonal. We can choose a different basis for periodic functions which isn't orthogonal, but it wouldn't be useful (because everything would have sub/superharmonics, as you said) or physically realistic.

Not the answer you're looking for? Browse other questions tagged waves frequency or ask your own question.

1
Multiples of frequencies in Fourier transforms

3
Do monochromatic waves carry information?
1
Will a sound composed of the frequencies 450Hz, 650Hz 850Hz have a clearly defined musical pitch? Why?
0
Confusion in understanding the concept of beats
142
Why are the harmonics of a piano tone not multiples of the base frequency?
1
Are all electromagnetic waves transverse in free space?
1
Expression for quasi monochromatic wave: dependence of the amplitude on time
5
Unwanted frequencies in sawtooth tone