Can two heavy objects circling around their C.M. be separated because of the speed of gravity? 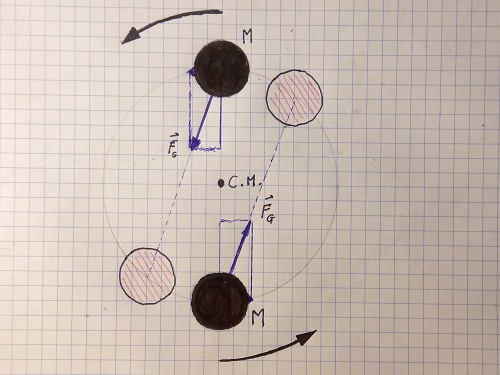 Imagine two massive objects, with the same mass (M) circling around their center of mass (C.M.). Let's assume that the distance between them is 1 light hour. Don´t the two bodies get accelerated and move away from each other because they feel the gravity of each other as it was 1 hour ago, because of which a force tangent to the direction of the speed develops?

They actually don't separate in distance, but Laplace himself asked the same question and made the exact same mistaken assumption that you did, so don't feel bad - you're in good company.

The best way to approach the problem is through an expansion in powers of $v/c$, where $v$ is the velocity at which the particles move and $c$ is the speed of light (or, more relevantly for this problem, the speed of gravity). At order $(v/c)^2$, we need to factor in the gravitational radiation emitted because the masses are accelerating. The $o((v/c)^2)$ contribution to the gravitational interaction actually causes the the particles to spiral inward as they lose kinetic energy due to the radiated gravitational energy. However, seeing this analytically requires the full machinery of general relativity, and it's a quite complicated calculation - in fact, it can't be analytically solved exactly.

However, the $o(v/c)$ effect is more tractable, and analyzing the problem at this order is enough to clear up your misconception. The particles' acceleration is $o(v^2/c^2)$, so to this order we can neglect it and only consider the effect of its velocity. In effect, we can consider the effect on particle B, assuming that particle A had always had its current instantaneous velocity ${\bf v}$ (i.e. assuming it had always been traveling in a straight line tangent to the orbit circle.).

It turns out that at this order the problem becomes mathematically equivalent to a familiar problem in special relativity: that of the electric field generated by a charge moving at constant relativistic velocity. It's a standard result from classical E&M (see, for example, Purcell) that in this situation, the electric field actually points exactly to the particle's present position, not to its retarded position as one might expect.

(This is because in a relativistic context, the fields generated by a particle depend on its velocity and acceleration as well as its position (as can be seen from Jefimenko's equations). It turns out that in the case where acceleration can be neglected, the fields simply point to the particle's "future projected position" based on its position and velocity at the retarded time, which is also its instantaneous present position.)

So it turns out that the $o(v/c)$ correction from general relativity is exactly zero: the acceleration on particle B is $GM/(2R)^2 + o((v/c)^2)$, and its direction is precisely radially inward, despite the apparent violation of causality.

This isn't a complete answer, but you might find it helpful anyway. Any corrections are appreciated.

Whether this happens in theory I can't say, but I'm pretty sure it doesn't matter in practice. First notice that the effect is going to be negligible unless the bodies are moving close to the speed of light; in other words, the delay in gravity has to be comparable to their orbital period.

Solving the two-body problem in general relativity is pretty hard. According to Wikipedia if the gravitational field is weak one can do a post-Newtonian expansion, which leads to the result that we can pretend that there is only one orbit around a stationary object with mass $M_1+M_2$.

Making this approximation lets me (and Wikipedia) use the Schwarzschild solution, and we can solve for the orbits. It turns out that Kepler's third law is still valid, and we can find the orbital speed as a function of radius:

So if we want $v$ to be close to the speed of light, $r$ has to be close to the Schwarzschild radius $2GM/c^2$. This can only happen for extremely compact objects (black holes or neutron stars) orbiting very close to each other. But in this case, we know that our objects lose so much energy to gravitational waves that they spiral in and collide. So it doesn't seem that the effect would be relevant here either.

Not the answer you're looking for? Browse other questions tagged general-relativity gravity or ask your own question.

24
Does gravity sometimes get transmitted faster than the speed of light?
7
Does the Earth orbit the Sun's current location, or its location from 8 minutes ago?
0
Does the static gravitational field move with the source instantly?

2
Laws of gravity for a universe that only consists of two objects?
0
Distorting the space-time fabric
3
Why do two masses orbiting around their CM emit gravitational radiation?
0
What would prevent two black holes from hitting speed of light in the flowing scenario?
6
Would two objects orbiting each other emit gravitational waves on every direction or only on their plane of rotation?