Could a "living planet" alter its own trajectory only by changing its shape?

In Stanislaw Lem's novel Solaris the planet is able to correct its own trajectory by some unspecified means. Assuming its momentum and angular momentum is conserved (it doesn't eject or absorb any mass), would this be possible (in Newtonian mechanics) and how? If not, can it be proven? The assumption is that the planet orbits a star (or perhaps a binary star) system.

My ideas go as follows: Assume we have an ideal rod consisting of two connected mass points. The rod rotates and orbits around a central mass. When one of the points moves towards the central body, we extend the rod, getting it closer to the center. thus increasing the overall gravitational force that acts on the rod. When one of the points is getting away from the center, we shrink the rod again, thus decreasing the combined gravitational force. I haven't run any simulations yet, but it seems this principle could work.

Update: An even more complex scenario (conserving momentum and angular momentum) would be if the planet ejected a piece of matter and absorbed it again after some time.

If you allow for non-Newtonian gravity (i.e., general relativity), then an extended body can "swim" through spacetime using cyclic deformations. See the 2003 paper "Swimming in Spacetime: Motion by Cyclic Changes in Body Shape" (Science, vol. 299, p. 1865) and the 2007 paper "Extended-body effects in cosmological spacetimes" (Classical and Quantum Gravity, vol. 24, p. 5161).

Even in Newtonian gravity, it appears to be possible. The second paper above cited "Reactionless orbital propulsion using tether deployment" (Acta Astronautica, v. 26, p. 307 (1992).) Unfortunately, the paper is paywalled and I can't access the full text; but here's the abstract:

A satellite in orbit can propel itself by retracting and deploying a length of the tether, with an expenditure of energy but with no use of on-board reaction mass, as shown by Landis and Hrach in a previous paper. The orbit can be raised, lowered, or the orbital position changed, by reaction against the gravitational gradient. Energy is added to or removed from the orbit by pumping the tether length in the same way as pumping a swing. Examples of tether propulsion in orbit without use of reaction mass are discussed, including: (1) using tether extension to reposition a satellite in orbit without fuel expenditure by extending a mass on the end of a tether; (2) using a tether for eccentricity pumping to add energy to the orbit for boosting and orbital transfer; and (3) length modulation of a spinning tether to transfer angular momentum between the orbit and tether spin, thus allowing changes in orbital angular momentum.

If anyone wants to look at the article and edit this answer accordingly with a more detailed summary, feel free. As pointed out by Jules in the comments, the "previous paper" mentioned in the abstract appears to be this one, which is freely available.

The idea of "swimming in spacetime" was also discussed on StackExchange here and here.

Let's suppose that Solaris' sun does not rotate. If Solaris' spin axis' direction is $\vec n$, the total angular momentum will be

So if Solaris is able to change its moment of inertia $I$ by changing its mass distribution, we see that it is indeed possible for it to adjust its trajectory, because if $I$ changes then $\omega, \Omega$ and $r$ will have to change to conserve total angular momentum.

A different mechanism: On a long timescale, by increasing the surface area exposed to the sun (flattening the planet), the radiation pressure would increase, boosting to a higher orbit. Changing the albedo would be a more effective means to the same end but could allow assymetric force as well Either way it would be simpler in a tidally-locked planet. This has been proposed for deflecting asteroids. Extrapolating from figure 3 at that link, a perfectly reflective surface of the same scale as the asteroid/planet would take millenia for enough deflection to avoid an asteroid/coemt hitting Earth. There doesn't appear to be a limit to the timescale in the question, so assuming geological timescales this might be what you're looking for.

Thanks to Michael Seifert's answer, I found a paper he referenced: Satellite Relocation by Tether Deployment by G. A. Landis and F. J. Hrach, 1989.

By extending a tether radially, a satellite can increase or decrease its orbital speed (pictures below copied from the paper): 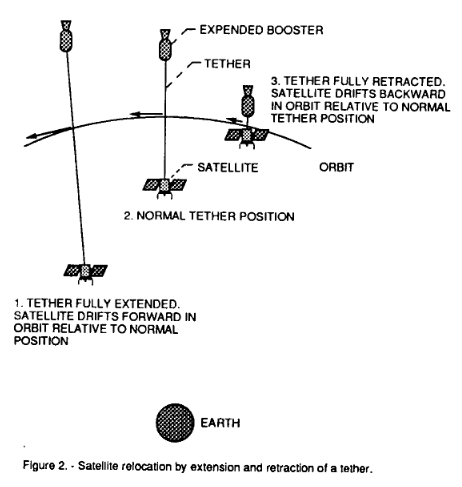 The principle then can be used to pump an eccentric orbit: 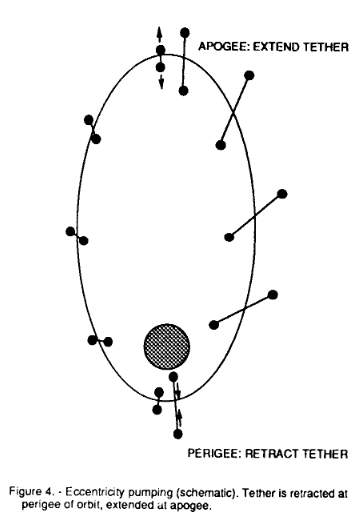 Similarly a planet like Solaris could then assume an elliptical shape, prolonging itself in a radial direction, to change its trajectory.

You can always use the process of tidal acceleration/deceleration. In nature this process might be very slow, such as for the system Earth/Moon. However, you can alway speed it up, by artificially increasing the frequency of the shape oscillations. In a natural system tidal acceleration will stop when the two objects are in tidal locking (both object always facing each other), but this can be overcomed. Tidal locking stops the acceleration because the objects no longer change their moment of inertia. If you do keep changing the shape artificially though, the process can continue indefinitely (but it will become faster as the bodies become closer or slower as they get farther away). the end product though, will be a huge change in the body rotational speed, which will be the end product of these changes in distance.

By conservation of momentum and energy, the only possible way to change a planet's trajectory is to eject some (large) mass at high velocity in specific direction, like rockets do. But you are also correct that by increasing the moment of inertia, the rotational speed can be changed. But this cannot influence the movement of center of mass.

Edit2: Other answers capture what I missed while looking for a fast solution. The interplay between rotational and orbital angular momentum can indeed produce some effect (credit to @WetSavannaAnimalakaRodVance and @valerio92).

Let's assume that the rotational axis of the planet and it's orbit are aligned. Then, we have 2 invariants:

where $I$ is a moment of inertia of a planet and $\omega$ is the rotational frequency while $\Omega$ is the orbiting frequency. $m$ and $M$ are masses of the planet and a star, respectively. Now, let's exclude $\omega$:

For $\Omega$ we have a condition of staying on orbit:

There might be a mistake somewhere, but we can solve this for $R$ and, keeping $L$ and $E$ constant, we can vary $I$ changing the orbit radius.

Edit: Not directly related to the question formulated in the title. Okay, among futuristic options would be destruction of some nearby objects like closest planets or the hosting star. If this won't destroy our planet, it's course will definitely change. But to do so, one needs to accurately disperse the mass comparable or much bigger than the planet.

Basically, everything boils down to changing distribution of the mass.

If a planet changes its shape from a round ball into a twine spool like shape (i.e. with a thicker center and elongated thinner ends) and assuming the elongation is done exactly along the radial line to the star (Sun), then for simplicity sake, the amount of mass that gets closer to the star is the same amount that gets farther from the star.

Preserving angular momentum in the above elongation scenario implies that the planet's spin rate along it's own axis will increase however for the same of brevity, we will assume that there is none or insignificant gyro effect at play and we'll look at only the gravitational forces... ...

Since the gravitational force is inversely proportional to the square of distance between the masses, it leads to an obvious/direct inference that the sum total gravitational force on the whole mass of the planet (part closer to star and the part farther) will increase, hence the planet will be pulled closer.

To make this a bit more clear.. Let's say a 1/4th of the planet (PartA) moved X km closer to its Star/Sun. At the same time 1/4th of the planet (PartB) moved X km away from the Star/Sun. The remaining 1/2 stayed at original distance and isn't part of the gravitational force change calculations. The original G force on PartA increases based on the standard Newtonian formula \begin{equation} \ F = G * (m1 * m2) / r^2 \end{equation} So this means that if "r" was originally Y km, now it is (Y - X) km. The means that F(on PartA) has increased inversely proportional to the reduction in "r". It also means that F(on PartB) has decreased inversely proportional to the increase in "r", however due to inverse square the increase is larger than the decrease, so as a whole the planet is experiencing more gravitational force. Which means the planet will start to move closer to the Star.

Hmm.. hey! that's pretty cool "a living planet altering its shape because it wants to be pulled itself closer to its Sun".

Similarly if the planet changes its shape to be more like a plate flattened along the planetary trajectory (i.e. perpendicular to the radial line), it will be able to reduce the gravitational pull and could get farther away from the star.

So yes, a living planet that was originally a round ball, by the above described fairly straightforward alteration of its shape, could effect a change in its own trajectory.

One different aspect to this in case we are really talking about a living planet. Because gravity really kicks in at that scale, anything the size of a planet is so smoothly round that a polished billard ball feels ashamed for its own imperfection. So if this being is really planet-sized, it better be of really low density ...

Not the answer you're looking for? Browse other questions tagged classical-mechanics gravity newtonian-gravity or ask your own question.

3
Why does unequal mass distribution cause orbital decay?
1
Can the angular momentum of any rigid body (symmetrical or asymmetrical) be found this way?
9
Do the planets really orbit the Sun?
0
Gravity effects when deleting stars or planets
11
Approximations in elliptical orbits
1
Where is angular momentum supposed to be conserved when dealing with questions on rotation
1
Gravitational collapse of a gas/dust cloud into a disk and subsequent evolution (minimizing energy?)
1
Does angular momentum exist around the moving center of mass of a released swinging rigid body?
1
Why do the 2 planets in a two-planet system orbit around the center of mass?