What happens to the electric field lines when an electron and positron collide? [duplicate]

Ask Question
Asked 5 years, 5 months ago
Active 5 years, 1 month ago
Viewed 1k times
5
$\begingroup$
This question already has answers here:
What happens when a field turns on or off? (3 answers)
Closed 5 years ago.

A month back I began my course in classical electrodynamics. I know about the field lines of moving charges. But I have this question that if an electron and a positron are situated some distance apart and assuming that the electric force is 'somehow' great enough to accelerate them towards each other, then what happens to the electric field lines after the 2 have collided? The net charge becomes 0 and taking into the fact that photons are released, my question is what happens to the electric field?

Edit - So is it that the Electric Field exists outside the radius ct and is zero within the circle of radius ct which increases in diameter with time and spreads in space ?

The electron and positron are two point charges with opposite sign, and classically , as the field lines are an iconal representation of the charge, when the charge becomes zero there will be no electric field lines from the spot where the two point particles overlap.

For the low energies you are discussing, when they get close enough they may get caught in each other's potential forming a positronium, similar to the hydrogen atom. . This has energy levels and the annihilation will happen from one of these energy levels.

The postron and electron will be in probability locuses, called orbitals and these, depending on the quantum numbers of the energy levels, will have asymmetries which will allow for dipole and multipole electric fields as long as the positronium survives intact. It will fast annihilate into two photons, which will carry electric and magnetic field information in their complex wave functions, and balance the quantum numbers, energy and momentum and angular momentum.

The calculations for the probability of annihilation can only be done accurately using quantum electrodynamics, QED.

But what happens if they do collide or suppose we make them collide somehow ?

There are experiments with electron positron colliders, where the particles have higher energy ( not starting at zero kinetic energy as in your question). Again the collision dynamics is successfully modeled using QED. When electrons scatter on positrons, with enough energy other channels open and the scattering produces particles and resonances, i.e. the electron and positron"disappear" and other elementary particles come out.

Here is what the crossection looks like for this scattering. 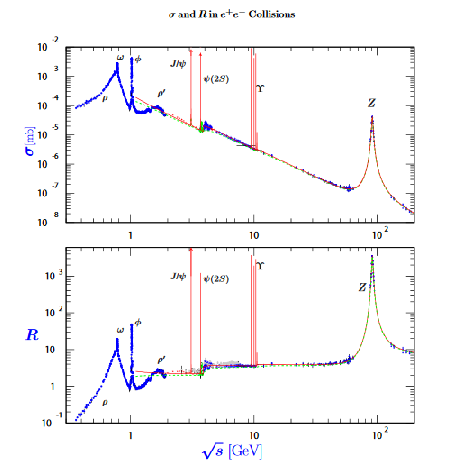 the top figure, go to the link for the caption.

It needs serious study of QED to understand these scatterings.

For the simple case of annihilation to two photons, the Feynman diagram which defines the probability of this to happen is

The e- radiates a photon and becomes virtual, and meets the e+ and annihilates into another photon, conserving momentum and energy in the center of mass system. It has no meaning to be talking of fields within this context of the quantum mechanical framework. Again the two photons will have in their complex wavefunction information on electric and magnetic fields, but the classical picture does not work at this level.

Not the answer you're looking for? Browse other questions tagged electrons electric-fields quantum-electrodynamics antimatter or ask your own question.

5
What happens when a field turns on or off?

2
If we change the radius of spherical surface does electric field or flux change?
1
Why isn't the electric field just a mathematical tool?
5
Why does the potential difference between two charged plates increase as they move further apart?
1
Electric field inside a non-conducting shell with a charge inside the cavity