This makes no sense to me (I'm new to physics) and my textbook didn't explain this well.

The water molecule is not linear rather it has a bent shape with two hydrogens on the same side. This happens because of the lone-pair-bond-pair repulsions.

The oxygen has is a more electronegative element than hydrogen, i.e: oxygen has high electron-attracting power. Therefore, it attracts the bond pair electrons towards itself which gives a partial negative charge to the oxygen and a partial positive charge to the hydrogen. This gives a possibility of the positive part of a molecule being attracted towards the negative part of another molecule. This is how water molecules attract each other. The bonds formed between the hydrogens and the oxygen are termed as hydrogen bonds and these are quite strong bonds which is why water with very low molecular mass has unusually high melting and boiling boint. 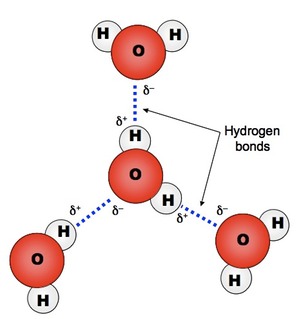 As a matter of fact, even molecules with zero dipole moment can also attract each other. There exists weak Van der Waals forces (London Dispersion Forces) which are caused by induced dipoles. This is responsible for helium to to stay in liquid form at 4K.

This is a more general answer.

Atoms and molecules are quantum mechanical entities. This means that the "shape" of atoms depends on the solution of quantum mechanical equations, which give probabilities for locating in space the electrons that are bound to the nucleus of the atom with the electric potential provided by the protons of the nucleus. The electrons are located in atomic orbitals around the much smaller in space nucleus which have the quantum numbers of the solutions.

In this orbitals table one can see the complicated shapes available in space for the negatively charged electrons. What happens to the electric field of an atom with these, almost LEGO like orbitals, is the following: where the electrons are, the positive charge of the nucleus is neutralized/shielded, but where they are not, the positive charge dominates and thus even though overall the atom is neutral in space it has an electric field with attractive and repulsive possibilities in spatial orientation.

Thus an atom can form a stable molecule with an other atom of its species, as O2 for example, the atoms fitting each other like LEGO blocks.

Not the answer you're looking for? Browse other questions tagged electrostatics water physical-chemistry molecules dipole or ask your own question.

2
How do we know that electrons are moving in an electric current?
0
Why do two molecules of an element attract each other?
1
Hooke's law for atom-to-atom energy well can't be right
1
How do Electrons in a Crystal Lattice form Pair bonds?

4
why water molecules in vapor contributes to the green house effect and water condensed in drops not?
3
How do the molecules of reacting compounds proceed to form "Most Stable" molecule?
3
Electric Field One-Form
0
Electric Field and Neutral Objects
0
What is the effect of water molecules in an oscillating electric field?
0
How to calculate the electrical force of attraction between a dipole and ion?
0
Voltage and electric field between Live and Neutral conductors
0
How will a polar molecule affect another molecule nearby, why it feels a relatively large force?
0
How many atoms need to be present to form a molecule?