Help with understanding result from publication on phase transition

In my current research project in statistical mechanics, in the context of phase transition and condensation, I was reading the seminal paper of Yang and Lee titled: "Statistical theory of equations of state and phase transitions I. Theory of condensation” and there was a comment about a proved theorem which I could not understand, on page 2 right after theorem 1 they state the independence of the limit on the shape of the volume V, but then it is mentioned that this true so long as V is not so queer that its surface area increases faster than $ V^{\frac{2}{3}} $. The function mentioned in the theorem is the grand partition function. I do not understand this comment, so I am asking here in the hopes of having someone please help me. I have the section of the paper for reference. I thank all helpers.

It's clear that any reasonable 3D shape satisfies the same kind of scaling, which implies $A \propto V^{2/3}$.

However, it's possible for fractals to have perimeter/area/volume that do not scale with the usual power of $a$. For example, consider the Sierpenski triangle, shown below. 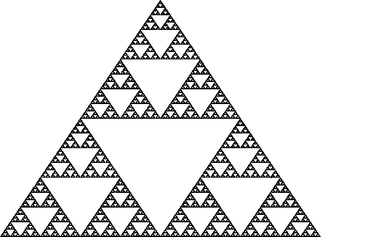 A Sierpenski triangle with side length $2a$ contains three Sierpenski triangles with side length $a$. Therefore, the area only triples when $a$ is doubled, so the surface area is proportional to $a^{\log_2 3}$. The quantity $\log_2 3$ is called the fractal or Hausdorff dimension. This breaks the usual scaling rule of area on perimeter (i.e. $a^2$).

The remark in your paper is just to rule out weird cases like this. You can, mathematically, do statistical mechanics with fractals, but I don't think it's very physically relevant, since physical systems have finite resolution.

Not the answer you're looking for? Browse other questions tagged statistical-mechanics phase-transition condensation or ask your own question.