I'm having difficulty understand Newton's laws of motion in practice, and how to model true dynamic systems. There are two examples below, where I cannot quite figure out what the true forces and motion would be.

In my first example, a rotating actuator (blue) is causing a "finger" (yellow) to move an object (red) along a flat surface. There is a Torque applied to the actuator, which cause the finger to apply an Impact force on the object. The object also experiences Friction and an upwards contact force equal to its Weight. Now, let's say that the finger is of length 1 m, and the Torque is 1 Nm. This means that the force at the end of the finger is equal to 1 N. This force is then applied to the object, causing an Impact force of 1 Nm. Now, let's also say that the object's weight is 1 N, and it's dynamic coefficient of friction is 0.5. This means that the resultant right-to-left force on the object is 0.5 N (= 1 - 0.5). Due to Newton's second law, this means that there is an acceleration of the object in the left direction. However, the actuator is only rotating at a constant angular velocity, so the object cannot be moving with any acceleration. What am I negelecting to model? 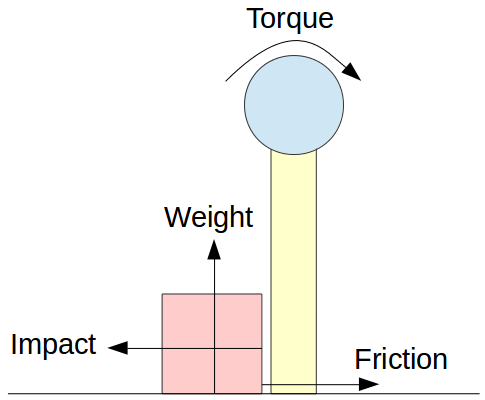 In my second example, there are now two rotating actuators, causing two fingers to grip onto the object, which is in free space. The actuators have equal and opposite torque (Torque1 and Torque2). There are two friction forces keeping the object within the fingers (Force1 and Force2). Each finger also causes an impact force upon the object (Impact1 and Impact2). So, the resulting left-to-right force on the object is 0, because the forces from the two fingers cancel each other out. This makes sense to me in theory, but in practice, Torque1 will never be exactly equal to Torque2. If either of these two torques is even slightly different to the other, then this will cause a resulting force to be applied to the object. However, with a robot gripper for example, the fingers would close upon the object, and then maintain the position at the point of contact, even if the torques are slightly different. The object would not slowly start to accelerate in one direction. What am I neglecting to model? 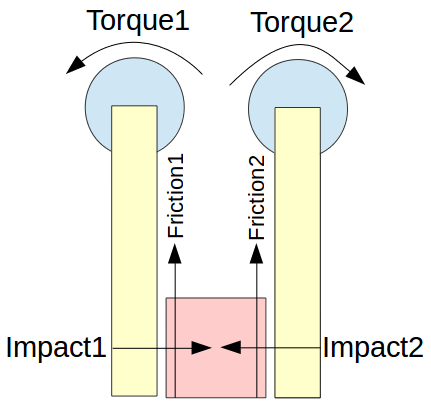 For the first figure:

Now, the third law does, which means that the actuator will feel a reaction force equal and opposite to the one it makes on the object. If the net forces are zero it will keep moving at constant speed (for instance, if the torque gets increased during the collision to prevent the actuator from decelerating due to the reaction force). This is all in the ideal limit when the collisions can happen instantaneously.

In real life though, the object cannot accelerate instantaneously from zero to the actuator's speed, so either one or the two objects will suffer a momentary deformation or the actuator will slow down for a moment.

In the second example, it depends on the details of the gripper. But again, if the two torques are different, at least one of the grips will slow down or deform as the object moves, until a feedback mechanism makes the two forces equal enough to make the vibration due to slightly unequal torques negligible.

Not the answer you're looking for? Browse other questions tagged newtonian-mechanics classical-mechanics forces friction torque or ask your own question.

5
Why do your fingers alternate then meet at the center of mass of the object?
0
Stopping a spinning object with a flexible gripper
0
Real Pulley and Newton's Third Law
0
Help with the problem of moving two fingers along a yardstick
0
Kinetic friction and Newton's third law
0
Confusion understanding the torque in FBD?
0
Torque on accelerating tire
1
Are Newton's first and third laws contradictory?