I couldn't find a straight and clear answer to this question on the internet: Why is the weak interaction (charged), the only interaction which can change the flavours of the quarks?

Lets look at the weak isospin doublet of for the first generation of quraks \begin{equation} \begin{pmatrix} u\\d' \end{pmatrix}_{L} \end{equation} Where $d'$ is represents the quantum mixing of $d$ and $s$ quark. From gauge theory, we know that, the role of gauge bosons is to transform a particle to another one, which living in the same mutiplet. So, if a $u$ quark turns into $d$ quark, that can be possible if a positively charge gauge boson can mediate such a transition.

Because interactions conserve the third component of weak isospin, $T_3$. So the incoming $T_3$ in a vertex must be equal to the outgoing $T_3$. For example: 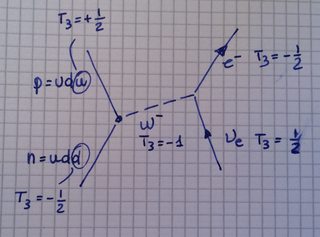 Not the answer you're looking for? Browse other questions tagged particle-physics elementary-particles weak-interaction or ask your own question.

1
Why does the weak interaction not conserve the flavour quantum number?