Does the $t = 0$ hypersurface of simultaneity constitutes the universal present?

Does the hypersurface of simultaneity in the diagram below represent the universal present moment?

Source: Einstein for Everyone - Spacetime

The hypersurface of simultaneity does not represent the present. It is just a plane cut through spacetime. If you changed your own state of motion this would tilt the plane by some angle. So the notion of "now" as the hypersurface of simultaneity would depend on your state of motion, which is of course not meaningful. In fact, the notion of "now" itself is meaningless. There is just a meaning of "here and now".

Quite clearly the answer to this is that no, it does not. In particular, consider two inertial observers moving (in flat spacetime) relative to one another. We know that neither of these two observers is more privileged than the other: the laws of physics are the same for each of them and so on. Yet they will draw different hypersurfaces of simultenaity for the same event. (They will agree, for instance, on the light cone of the event, which is a physically meaningful thing.)

Since there is a continuum of different such surfaces, no one of which it is possible to privilege over any other, none of them can be physically important.

To put this another way: if you believe that some hypersurface defined by $t=0$ for some coordinate $t$ which parameterizes a particular family of timelike geodesics defines a 'universal present' then this is exactly equivalent to picking a particular inertial observer and saying that their reference frame is the one that matters: this particular observer is somehow more important than all the others, because only this observer gets to define this magic 'universal present'. Yet there is no way of identifying such an observer.

As the saying goes, a picture is worth a thousand words. Below is a time-spatial axis diagram of the time and x-axis in two frames. One is at rest relative to the blue, and the other is Lorentz boosted to some velocity. What is the plane of simultaneity is dependent upon the frame that you are on 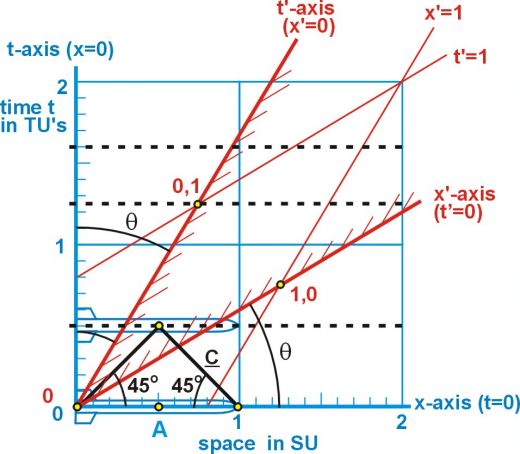 Not the answer you're looking for? Browse other questions tagged spacetime reference-frames coordinate-systems or ask your own question.

5
What does scalar phi represent in spacetime?
14
Is "now" or "the present moment" properly defined in GR?
1
What does the spacetime diagram for accelerated/non inertial observers look like?
1
Does a vacuum solution to the Einstein equation imply flat spacetime?
0
In the twin paradox, can light signals be used between twins to figure out what their proper times were when the light signals were sent?
0
Understanding the spacetime diagram for an accelerated observer moving farther away
0
A question about space-time diagram
3
Symmetry in the Simultaneity of events in Special Relativity