Can there be an acceleration when no net force acts on a massless object?

If no net force acts on a massless object can there be any acceleration of the object?

$\implies a$ can be anything.

In a theory view point, it is possible. For example, consider figure below. The string is massless and inelastic (rigid). (There is no friction)

The string moves with the mass $m$, so its acceleration is $a=\large{\frac Fm}$. But, the net force acting on the string is zero.

Simple answer is No.

First of all you cannot apply Newton's Equation (Classical Physics) to any mass-less objects, because, all mass-less objects (like photons) travel at the speed of light, and at that speed we use equations from modern physics (Quantum and Relativity).

Without any force, they will keep traveling at constant velocity. To produce acceleration (to change velocity) some force has to be applied. (Remember that you can only decrease the speed)

Mass-less objects are created and destroyed (most common example is photon; their energy can be converted into another form such as electrical energy). Mass-less objects don't exist just at any speed. Since the moment of creation, they start moving at the speed of light.

Your question somewhat resembles to this one. Do photons have acceleration?

No Bro. *even though the object is mass-less and the net force is zero but also then it can't accelerate. net force can be zero only if any force(s) is balancing the applied forces i.e. the resultant force will have no direction so there is no reason and direction left for the object to accelerate for.In the figure the ground can be ground or any kind of support.that's just an example. * 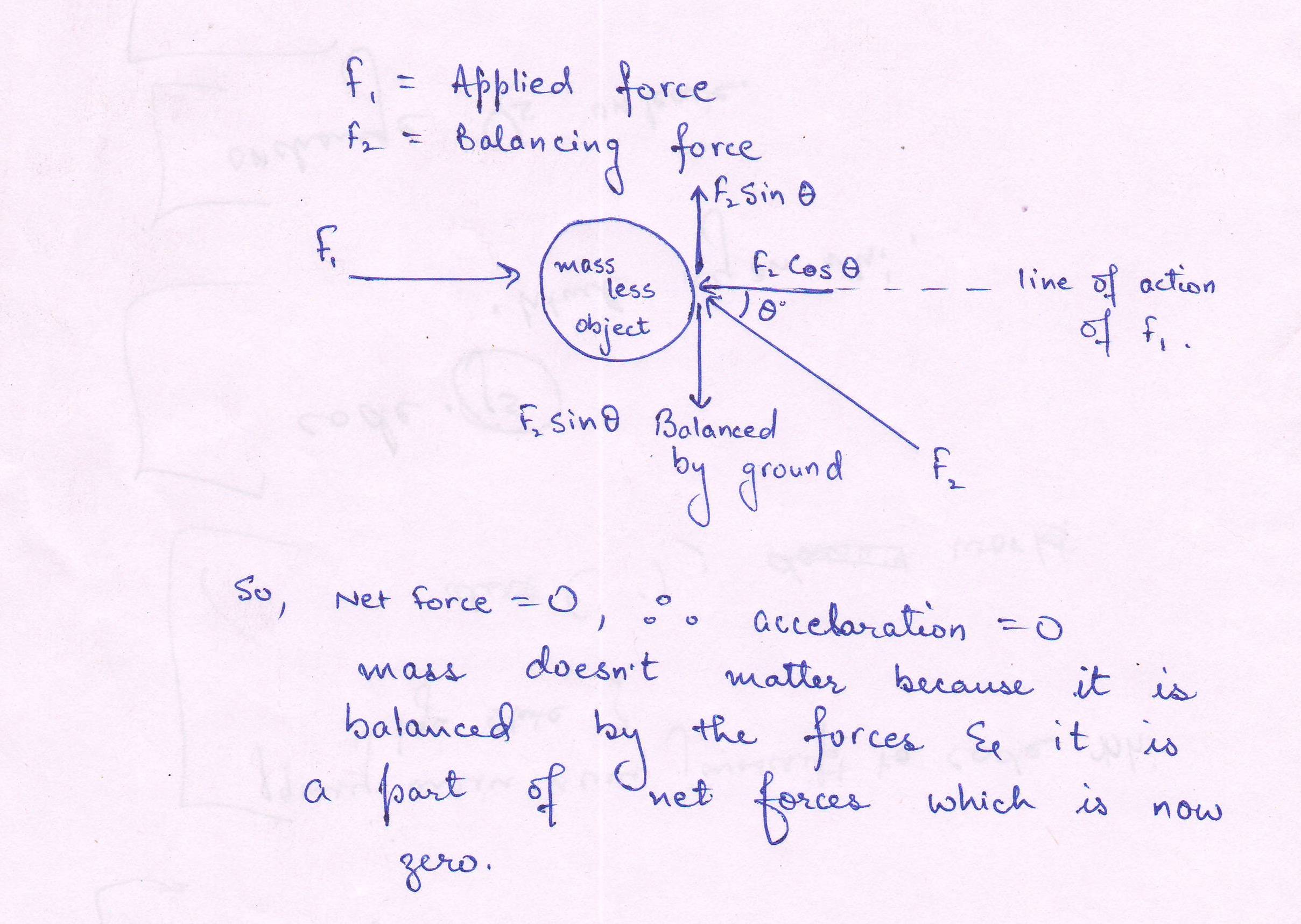 **hope you decipher what i am trying to explain to you.Looking for your further suggestions. Even if there is any flaw in my explanation inform me please so that i can make my concepts clear.

If the acceleration of a massless object is less than infinite, the net force on the object must be zero. An example is a massless frictionless piston manually being held in place within a cylinder featuring an initial high pressure inside the cylinder and atmospheric pressure on the outside. If the piston is suddenly released so that the gas experiences an irreversible expansion, the acceleration of the piston will not be infinite, and the forces on either side of the piston (which will include viscous forces and inertial forces of the gases) will immediately adjust such that the net force on the piston will be zero.

10
Do photons have acceleration?

1
Can we determine the force an object exerts by its mass and acceleration?
4
Why aren't things massless when they have balanced forces acting on them?
2
What is the Benefit of Plotting a Log of Net Force vs. Log of Acceleration Graph?
0
Newton's Second Law of Motion - Net Force Vs. Velocity
3
How can a massless string move if the net force on it is always zero?
1
Why is the net force acting on a massless body zero?
3
How to determine component forces when net force is known?
1
Net force on a mass when a string (massless) is cut