How are the standard model and the Higgs boson actually confirmed experimentally in practice?

This is my mental picture on how we can make predictions from a theory (I'm not a physicist so this might be quite wrong) :

Typically, we solve a partial differential equation (analytically if we can, but often we can only do numerical calculations), where in the input of the problem we put the known quantities (or the quantities we don't know but want to simulate), and in the output, we get the numerical quantities that we can then confront to reality through experiments. It's really easy when we have a simple equation such as F=Ma (Newton), and the numerical input is just one quantity (say the intial position and speed of a particle, etc.), the numerical computation is simply a 2-order differential equation, and the numerical output is also one quantity (say the position of the particle at time t) and the experiment involves no statistical error, etc.

But I suppose things get much more complicated in reality with a huge theory such as the Standard Model of particle physics. My question is precisely this:

My mental picture on how they determined the mass of the Higgs is that they confronted whatever output the theory gives when there is a Higgs of mass X (a numerical variable in the computation), and they change the value of X in the numerical computation in order to fit the output with experimental data.

Typically, we solve a partial differential equation (analytically if we can, but often we can only do numerical calculations), where in the input of the problem we put the known quantities

Physics started with observations of nature, and mathematics developed which could model the observations and measurements and predict future set ups.

Beginning with geometry from BC , which developed from the needs of measuring and planning land usage, to the astronomical observations that started from the geocentric and became the heliocentric system the mathematical models of physics developed slowly and were mostly algebraic equations.

The standard model of particle physics is the present model that unifies electromagnetic with weak and strong interactions, in a logic similar to Maxwell's unification of electric and magnetic interactions with his differential formulations.

The standard model did not appear whole ( like Athena from the head of Zeus). It was slowly built up through the use of the solutions of differential equations over the latter half of the twentieth century, as accelerators were built and the energies of interactions increased.

From Rutherford scattering which showed that atoms had a hard core, the nucleus, to the LHC scattering particles on each other and measuring their crossection has been the main experimental tool to study the microcosm of elementary particles.

The standard model is a model that depends on the solutions of differential equations ( or equivalent mathematical formulations) where the constants have been slowly fitted to experiments as energies got higher and higher, with a number of unknown constants that have to be determined by experiment.

The model is built around the SU(3)xSU(2)xU(1) symmetries observed to be obeyed by the plethora of elementary particles and their composites . The Higgs field and the mass of the accompanying Higgs boson were one of the constants sought for in building these experiments, to complete or expand the standard model according to the new LHC data.

The data taken at LHC are terabytes of numbers describing individual scattering events. Here is one event, all those momenta are recorded. 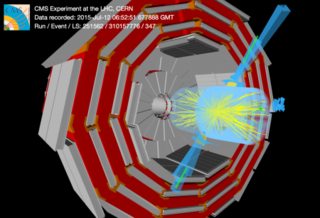 These events give distributions , as for example the Higgs mass distribution for specific channels of observation 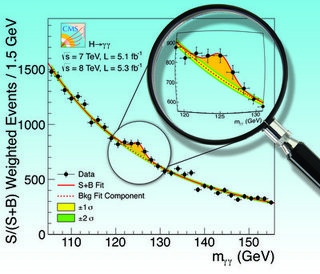 Note the dotted line under the Higgs peak It represents terabytes of data of artificial, Monte Carlo, events generated according to the differential equations of the Lagrangian, with the known inputs , as background for the search of new physics not included in the formulation . The Higgs mechanism itself is not constrained by the previous data that built the standard model, because it could be outside the kinematics of the LHC or even a composite effect. The predictions of the Standard Model for the mass of the Higgs just have a range . The LHC among other aims was built to measure this mass and define the SM better.

With the above in mind:

in the case of the LHC experiments in the discovery of the Higgs, what is the input ?

The input is the measurements.

What is the "numerical computation" (and where is it ?

The numerical computation is the simulation of events according to the Standard Model and comparison with the new measurements by fits.

How is the theory implemented ?Do the experimentalists use specific software ?

The theory in the backbone of the monte carlo event generation .

Does it require huge CPU power?) (I'm guessing it's not solving a partial differential equation ?)

Yes. It is integrating the SM differential equations by the monte carlo method.

? What is typically the output ?

See the Higgs plot above. Distributions, angular , energy, momenta, invariant masses .. of the multitude of events, chosen according to specific channels of outgoing particles from the proton proton scattering, to be compared with Monte Carlo calculations of the Standard Model.

To answer the title:

How are the standard model and the Higgs boson actually confirmed experimentally in practice?

The standard model is validated whenever new data agree with it. The discovery of the Higgs validated the standard model. That it is a Higgs boson comes from measuring angular distributions and examining the channels into which it can be found ( it can decay).

The real goal of experimental high energy physics is to find effects not predicted by the standard model, which would necessitate an extension/modification/... of it.

Not the answer you're looking for? Browse other questions tagged particle-physics experimental-physics standard-model large-hadron-collider particle-detectors or ask your own question.

18
What are the main algorithms the LHC particle detectors use to reconstruct decay pathways?
10
How are Monte Carlo simulations used in experimental high energy physics?
13
Use of Monte-Carlo simulation in High-energy Physics
9
What does the data in various stages of analysis from a particle collision look like?
3
What algorithms are used for track reconstruction in cloud chambers?