Would they, under the definition of a planet, be considered planets? One could argue they have not cleared their neighborhood by virtue of one not having cleared the other. But, it would seem strange to assume a planet would be capable of clearing something that always has its sun in the way.

Contrary to what some of the other answers claim, it is possible for two bodies of approximately equal size to (nearly) share an orbit around a larger third body. There are no known planets (or dwarf planets) with such orbits, but a well known example exists among the moons of Saturn: the co-orbital moons Janus and Epimetheus.

What happens in such a system is that the co-orbiting satellites don't stay at a fixed distance from each other: whichever one happens to be closer to the central body will orbit it slightly faster, and will therefore gradually catch up to the other one. However, once the satellites get close enough, their gravity will start to pull them together, so that the trailing satellite gains angular momentum and the leading satellite loses it.

In a frame rotating around the central body at the satellites' average orbital velocity, the net trajectories of the satellites end up looking like horseshoes. Here's such a schematic of the movement of Janus and Epimetheus with respect to each other as they orbit around Saturn (not to scale, obviously), taken from Wikipedia: 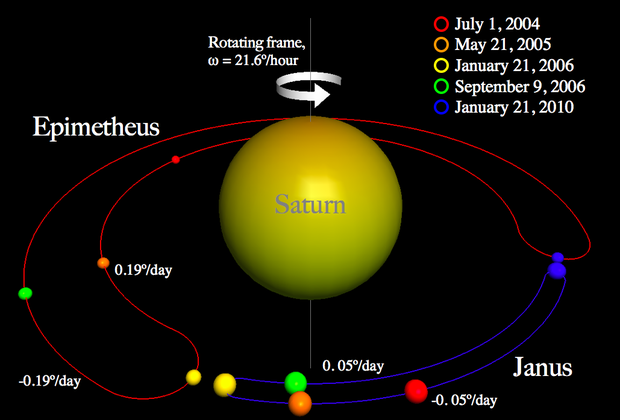 Cartoon of the horseshoe orbits of Janus and Epimetheus around Saturn, by Wikipedia user Jrkenti, used under the Creative Commons Attribution-ShareAlike 3.0 license.

As for whether two objects in such an orbit around the Sun would be considered planets, assuming that they satisfied the other requirements, I'd say your guess is as good as mine: since there are no such objects known in the solar system, and since it's not expected that any more would be found, the IAU had no need to consider this particular issue.

As far as speculation goes, one could argue that, if such a planetary pair did exist in the solar system, the IAU would've found some way to shoehorn them in. One possible way to do so might've been to consider the smaller object in the pair to be an unusual kind of satellite of the larger one, or at least to be "otherwise under its gravitational influence", allowing at least the larger body to be counted as a planet, much like the Earth is considered a planet despite the presence of the Moon in essentially the same orbit.

I don't think the situation you mentioned is possible. You're describing two planets, each of which being in each others L3 points (a lagrangian point is a point in an orbit with special gravitational properties, where an object will remain somewhat stationary relative to the body whose orbit it's in). Even our comparatively tiny spacecraft which sit in Earth's L1 point (between the Earth and Sun) require periodic corrections.

Planetary orbits are somewhat unstable: they change by little bits over time, as the sun loses mass and as other planets and solar-system junk push and pull on the planets. If one of these planets' orbit changed just a tiny bit it would fall out of the lagrange point and into another orbit. The planets would begin moving at different speeds and would either collide or move into independent orbits in an astronomically short period of time.

It just so happens that the leading theory of how we got the Moon is that a mars sized planet called Theia existed in Earth's L4 or L5 point (sixty degrees ahead or behind Earth in its orbit). This is similar to the situation you mention--it orbited the lagrange point, became destabilized over time and slammed into the Earth.

If we did find a couple of planets orbiting in such a fashion, I think they would both be informally referred to as planets. Since this would be such a rare and special occasion, the IAU might let it slide, or they might classify them as dwarf planets depending on other circumstances (there are lots of orbital resonances in the inner asteroid belt for example, if these two planets existed in such an orbit I think the chances are good that there's lots of other junk floating around them as well).

Just for the sake of argument, if those two planets each had two more planets in their L4 and L5 points, making up some kind of magical planet hexagon, would all six still be classified as planets?

To take a closer-to-home look at this, there are a couple of co-orbital moons of Saturn. These are Tethys, and it's two co-moons Telesto and Calypso. The smaller moons are in Trojan points (L4 and L5). The key thing here is 'smaller moons'. The islands of stability offered by L4 and L5 are not that strong, and bodies of equivalent mass will be more influenced by other celestial bodies than the island of stability.

Also, not all Lagrange points are stable. As the designers of the SOHO telescope learned, you can't put a satellite in the L1 point, at least not reliably. But you can orbit the L1 point. L3 is also very unstable, so any body there wouldn't stay there for very long, especially one with equivalent mass of the planet. Also keep in mind that the only way a body in L3 would not be visible from the source planet would be if the source planet's orbit is nearly circular.

If we ran into such a configuration in an exoplanetary system it would be very interesting to watch over time. At this time we can't confirm that a body has 'swept its neighborhood', so using that definition of a planet is not currently useful for exoplanets.

I have to say that I would consider them as planets because of the fact that they both are large enough and have a regular orbit around the sun.

Share
Improve this answer
answered Jun 17 '11 at 23:13
grassmangrassman
$\endgroup$
Add a comment  |
Highly active question. Earn 10 reputation (not counting the association bonus) in order to answer this question. The reputation requirement helps protect this question from spam and non-answer activity.

Not the answer you're looking for? Browse other questions tagged newtonian-gravity orbital-motion planets definition stability or ask your own question.

10
What if the Moon was 100x more massive: Binary planets?
8
How many celestial bodies could be in stable orbit at roughly the same distance from a star?
5
Changes in planetary orbit?
0
Gravity effects when deleting stars or planets
0
Will two planets in a binary star system rotate in the same circle around the mass center every period?
5
Why are large planets away from the Sun and smaller planets near the Sun?
1
On Planets orbiting binary stars
0
Why are planets not torn apart?