What does Orion's Belt look like from the Equator?

I've been struggling with this question all morning, yet I get the feeling the answer is frightfully simple.

If Orion appears upside down in the Southern Hemisphere and the right way up in the Northern Hemisphere, what does it look like in equatorial countries such as Kenya, Colombia, and Ecuador, bearing in mind that Orion itself is in the equatorial region of the celestial sphere?

I initially thought it could just be a matter of perspective: If you're on the equator and facing North you'll see it the right way up,but see it upside down if you're facing South. But then surely that approach would apply even if you were in the Northern or Southern Hemisphere.

I reckon the times Orion is visible in various parts of the world will also have to be factored in. For example, it is visible at night late spring to summer in the Southern Hemisphere.

Could anyone offer me some advice? I fear I may be over-thinking this.

Your hunch about perspective was actually correct, though a little off in the details. Orion's head always points roughly north. When you look at Orion in the northern hemisphere, Orion always appears in the southern part of the sky. Hence, since you are oriented towards the south, Orion is "right side up". Likewise, when viewed in the southern hemisphere, Orion is always in the northern sky, and since you face north, Orion appears upside down.

When you are at the equator, Orion's orientation depends entirely on your own orientation. If Orion is just rising, you are forced to look east, and Orion is sideways, with Orion's head on the left side. If Orion is directly overhead, then, as you pointed out, the orientation depends on which way you are facing. If your stomach faces south while your head is looking straight up, Orion will appear to be oriented right side up, because you are facing south, as you are when you view Orion in the northern hemisphere. Since Orion is directly overhead, you can rotate your body by 180 degrees at the equator, and now Orion will be upside down. Most of the night, Orion will be away from zenith, so you will naturally be facing toward the east or to the west, and Orion will appear to be on its side.

Sideways. Just north of the Equator, Orion appears only slightly tilted towards right side up, etc.

Here's another way to think about it.

What the sky looks like from a given point on Earth (at a given time) depends on the orientation of the ground relative to the sky. You can simulate that.

I'm at about 33° north latitude. If I lie on my back and look straight up, I'll see a point in the sky 33° north of the celestial equator.

Suppose I set a board on the ground, and prop up the north end of it so that it's at an angle of 33° from horizontal. I then lie down on the board and look straight "up", but with "up" being defined as perpendicular to the surface of the board. I'll then have the same view of the sky as I would if I were lying on the ground at the equator -- because the board is at the same angle relative to the sky as the Earth's equatorial surface is. (Except of course that a chunk of the sky to the south that would be visible from the equator is blocked by the Earth.) 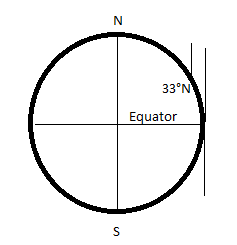 4
What really are some distant astronomical bodies that seems like dust clouds?
2
What objects look best in an O-III filter?
10
What does the sky look like to human eyes from orbit?
8
Why doesn't a close comet like Elenin look like other, famous comets (Hale Bopp, Halley…), which have nice, long trails?
6
What is the scientific basis for comets vs. main-belt comets being composed of different materials?
6
What would the sky look like if the Sun was a black hole?
2
Why does the shadow of Io on Jupiter look so big?
3
Can we look further than the CMB?