Why do we add intensities for coherent sound sources?

When there are N coherent sound sources playing the same note at equal loudness, their sound waves add up to make a sine wave of the same frequency but most likely different amplitude (can be anything from zero to N times the amplitude of one wave), depending on their relative phase shifts.

This page explains what happens for 2 waves, the new amplitude is

I need to generalise this for N identical randomly shifted sine waves.

Each individual sound can be represented as a vector in 2-dimensional space, with length 1 (since all are equally loud) and random phase. The resultant sound heard will be the sum of all those vectors.

Adding the vectors one at a time is thus effectively undertaking a random walk in 2 dimensions. The following statements are therefore equivalent:

It is entirely up to you to decide which one of them you prove from which, but in this case you can assume the truth of 1 (it is a standard result) and deduce the truth of 2, which, squared, is the result you asked for in your question.

(And my paradox wasn't a paradox because I had forgotten that loudness is proportional to the square of amplitude, so 100 choristers are 100 times as loud as one of them).

Incoherent sound sources yield essentially the same answer because you can think of them as coherent sources with varying phase - so again you end up with a total of random phases.

You might not like the 'random variable' phrasing, but it's not essential. At heart, the idea is that the $A_iA_j$ cross terms in $(\sum A_i)^2$ must average to zero. I call that property 'independence', you can call it something else.

You cannot prove that because it is not generally true, or because it depends on your definition of "equal loudness". Consider the case where the sound sources are inside a flaring pipe with a standing wave (say, a modified trumpet). 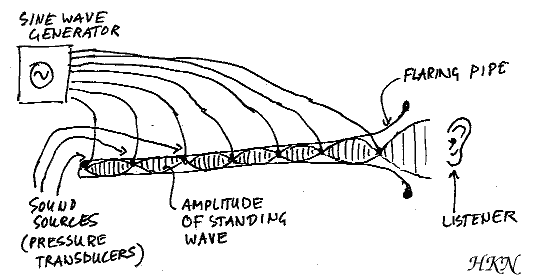 (Update: I assumed that the sound source primarily act on pressure. It might be more appropriate to consider sound sources as acting on air displacement, in which case they should be placed at the antinodes; the reasoning is otherwise similar.)

How is this possible? Where does the energy come from? Rest assured: the law of energy conservation is not violated. In a case like this, where the acoustic sources can feel each other, the sources have to work harder in order to achieve the same pressure. Imagine that you are driving a damped harmonic oscillator. If you put in twice as much amplitude, you get twice as much amplitude out, but you need to put in four times more power.

Now, if you say that each sound source adds a fixed amount of acoustic power, rather than a fixed amount of amplitude, then your statement is automatically true because of energy conservation. For a case like an ensemble of singers or musical instruments, the coupling between the sound sources is so weak that the difference between sources of fixed amplitude and sources of fixed power is negligible. But if you design a loudspeaker line array for use in churches or train stations, with the purpose of radiating the sound horizontally and not vertically, then this distinction will not be negligible and must be taken into account.

Not the answer you're looking for? Browse other questions tagged waves acoustics interference or ask your own question.

1
Why do we add intensity instead of pressure for sound waves?

0
How can I add a sound wave on top of an existing one, without harming the original's loudness?
1
Which is has the highest (greatest) sound intensity - Sine, Square or Sawtooth waveform?
4
Why is root mean square pressure used in the definition of sound pressure level?
4
Sound Intensity and Frequency Relation
4
Why do two coherent sounds add up $+6db$?
1
Why is sound "loudness" measured in $dB$ instead of $[P]$?
11
Why don't humans perceive sound waves as twice the frequency they are?
1
Coherent and non-coherent sources