'Slapping' sound when trains pass each other

I have noticed that when riding in a train travelling at over 100 kmh$^{-1}$, a loud 'slap' can be heard when another train travelling at a similar speed passes in the opposite direction, followed by 'whooshing' as air is sheared between the two trains.

I was wondering what the source of this initial 'slapping' sound is, and whether it is emitted when the fronts of the trains level with each other, or when the front of the opposing train levels with your window?

Since the sound (in my experience) is never heard when watching two trains pass each other from the platform, I would guess that it is due to the sudden compression of air outside the window, generating a sound wave which can only be heard by people travelling with the trains. However I am still not sure about what the presence of two trains has to do with this: it cannot be heard when one just stands on a platform and watches a single train come past, even when the relative speed is similar to that which could be observed between two trains? What actually causes this sound?

When two wavefronts run into each other, they add their amplitudes. The wavefronts are slightly behind and to the sides of the fronts of the trains. When two trains pass by each other at high speed, the wavefronts collide between the trains, adding together.

Here is a link to a slide show that simplifies a long paper written on this very topic. If you would like the whole paper, you can find it here.

Below is an image depicting the solutions to the pressure equations. It is simple to see how the high pressure in front of the red train would push on the windows and body of the blue train. As the front of the res train passes, the quick transition from medium to high to low pressure would likely snap the windows and outer body of the blue train enough to produce the aforementioned "slapping" sound on the inside of the car. This sound is accentuated by the spaces between cars, and especially the front of the train. 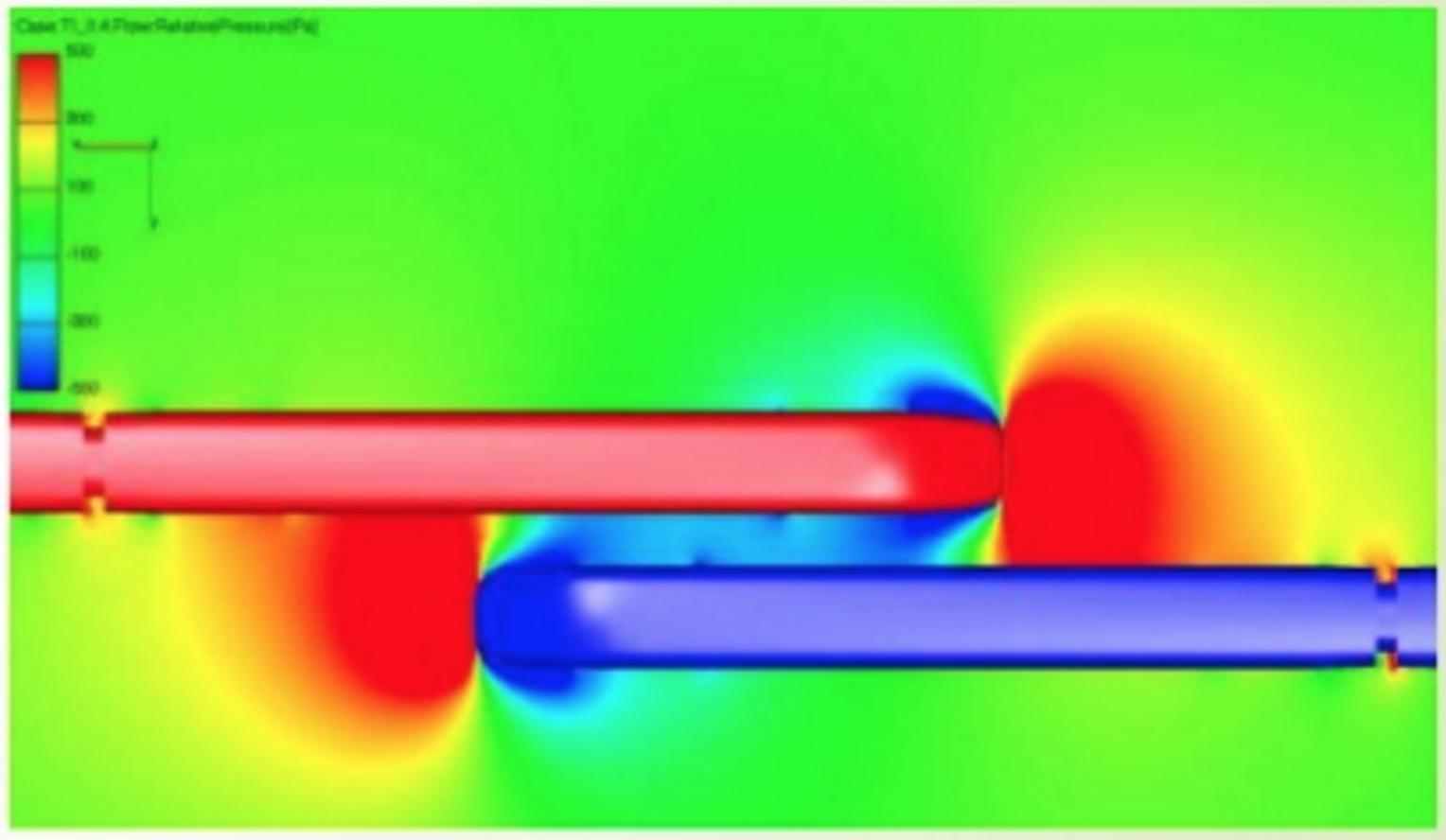 To be clear, this paper is probably the best explanation you're going to get on this topic. I've done my best to understand where this described "slapping sound" would come from based on that. The only way I can think of getting more information is to do a more complex simulation or a slow motion video of the outside of the train as the other passes by. It would be cool to see the ripple across the body of the train as the other train passes.

EDIT: To clarify, there are two sources of sound here: 1 - The fronts of the trains hitting each other. And 2 - The pressure difference creating a ripple on the outside of the body of the trains.

When the train moves, it displaces air in front of it and on the sides. So basically what you are hearing is the impact caused by the "air fronts" displaced by the two trains slamming against each other.

You need two air fronts to hear the sound, so there must be two trains. Also, the speed must be high enough to significantly compress the air: this is why you don't hear it when two trains pass each other on the platform.

I hear this regularly. I think its a combination of the effects above. The first effect is a front of compressed air being forced ahead of each of the trains. But then, as the fronts of the trains meet and pass, the Bernoulli effect leads to lower pressure between the trains. But this isn't uniform, each carriage has its own mini air front, and the carriages have numerous windows and doors, giving numerous ins and outs.

The result is that intermingled high and low pressure air waves are being forced into and between carriages where the cross section of the space also varies rapidly, and this causes peak and trough air pressures which impact less-than-solid sides and the windows and doors which can move in and out.

So what you hear is a large bang as the train fronts meet; lesser bangs at each carriage; doors and windows thumped in and out in a rhythmic pattern related to the passage of very similar carriages in sequence by varying air pressure; and so on.

It is worth to mention two things.

When two trains move opposite to each other, the air flow is enough stronger if it is not doubled. The pressure is lower. The flow is turbulent and the pressure is not evenly distributed in space between two trains. So that you can hear slapping.

Not the answer you're looking for? Browse other questions tagged fluid-dynamics acoustics everyday-life shock-waves or ask your own question.

2
Why moving train's windows slam shut when another train passes slowly in the same direction?

18
Why and how is sound produced when two objects hit each other?
15
Does sound propagate further in freezing weather?
2
Is a sonic boom loudest when source is at exactly Mach 1?
3
How to find distance from sound source given sound level
1
Determining the origin of the more dominant sound produced by two colliding bodies
1
Why does sound attenuate in air differently in different situations?
2
Why moving train's windows slam shut when another train passes slowly in the same direction?
0
Propagation of rate of fluid flow in a home