Why does the parallel component of the velocity gradient affect viscous force in a fluid?

The force density due to viscosity in an incompressible fluid is $-\mu \nabla^2 \mathbf{u}$ where $\mathbf{u}$ is the velocity and $\mu$ is the dynamic viscosity.

Let's suppose some particular small bit of fluid has volume $dV$. Then the $x$-component of force it feels is

To understand the term $\partial^2 u_x/\partial y^2$, imagine that the entire fluid is moving in the $x$-direction only, and that $u_x$ is a function of $y$ only. Then $\partial u_x/\partial y$ describes the momentum flux in the $y$ direction, and the derivative of this is the net momentum building up at some point, and so that's a net force. The situation is like this picture from Wikipedia. $x$-momentum flows from the top of this picture to the bottom. 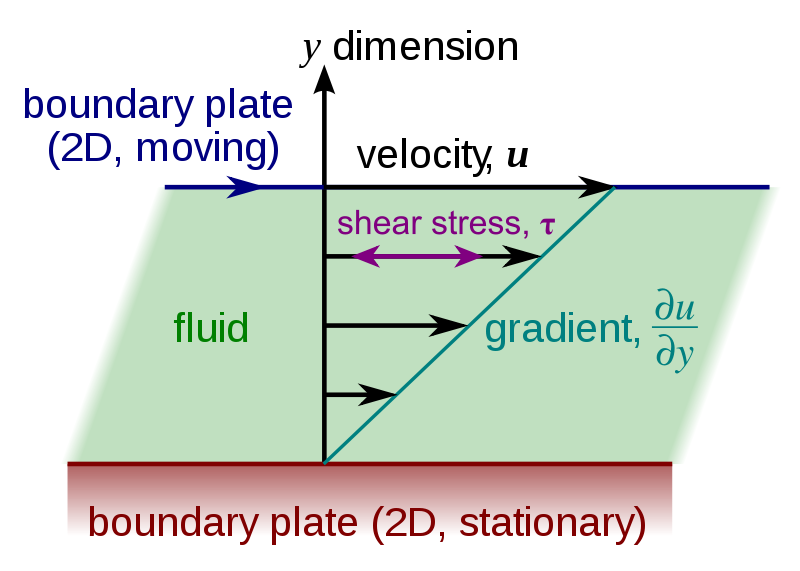 How should I understand the $\partial^2 u_x/\partial x^2$ term? I can't have flow purely in the $x$ direction where $u_x$ depends solely on $x$ (and varies with $x$); that would violate incompressibility. Is there some simple picture that demonstrates what this term is, or if not, some simple argument that shows that this term is right and should exist, based on the understanding of viscosity you get from the picture above?

The basic point is that the picture in wikipedia shows one very particular flow, a sheared laminar flow, but viscosity also acts in more complicated situations. Viscosity arises from diffusion of momentum, which acts to equalize the fluid velocity in adjacent fluid elements, no matter what the geometry of the flow.

This form of the stress tensor also arises in kinetic theory, where $$ \tau_{ij} \sim \int d^3p \, p_i p_j \, \delta f(x,p) $$ where $\delta f$ is a slight deviation of the distribution function from thermal equilibrium. For an inhomogeneous flow $\delta f\sim f_0(p_a p_b\nabla_a u_b)$, which comes from the streaming term in the Boltzmann equation acting on the distribution function $f_0$. The stress tensor can be traceless, but the diagonal components do not vanish.

All of this is true for both compressible and incompressible fluids, but obviously for a flow of the form $u_x=u_x(x,t)$, the gradient $\nabla_xu_x$ can only be non-zero is the fluid is compressible.

Postscript: A general problem with viscosity, reinforced by the wikipedia picture, is that we tend to have the wrong intuition for how viscosity operates. We tend to think/argue/assume that viscosity is friction between fluid layers, somehow caused by "stickiness" of fluid molecules (indeed, the name viscosity comes from the latin word for mistletoe). But this is not how Newtonian fluids work: There is no stickiness between fluid or gas molecules, a much better picture is provided by colliding billiard balls. In a system of colliding billiard balls, viscosity is due to momentum diffusion. This may happen between layers moving at different speed, but it also happens in more complicated situations that do not look anything like sliding layers, for example fluids undergoing anisotropic expansion.

To counter one source of puzzlement, if you did have one-dimensional flow with $\partial_{x} u_x=0$, you would also have $\partial_{xx} u_x=0$ and that funny term would go away. This may still not reach your biology students, but since they do understand partial derivatives, note that in an incompressible fluid $$\partial_x u_x+\partial_y u_y+\partial_z u_z=0$$ so the viscous term can be rewritten $$-\partial_{xy}u_y-\partial_{xz}u_z+\partial_{yy}u_x+\partial_{zz}u_z =-\partial_{y}(\partial_xu_y-\partial_y{u_x}) -\partial_z(\partial_zu_x-\partial_xu_z)=-\partial_y\omega_z-\partial_z\omega_y$$ and the force in the $x$-direction is due to lateral gradients of vorticity. I believe that this might generate some illusion of understanding

5
Why viscosity is diffusive?
4
Fluid flow: Force acting on the fluid and the Navier-Stokes equation
0
Viscous forces with asymmetric gradient velocity in fluid mechanics
2
Why does viscosity effect the normal component of stress in a Newtonian fluid?
5
Does a fluid with zero viscosity cause a body moving through it to decrease it's velocity?
0
How does viscous dissipation influence fluid temperature in pipe flow?
0
Why is viscous force directly proportional to velocity gradient
3
What is the interpretation of the symmetric stress tensor in laminar flow?
1
On taking the gradient of a compressible fluid potential