Why are photoelectrons emitted in the direction of incident photons?

In the experiments for photoelectric emission, the light is incident on one face of the emitting plate, for example the anode, when determining the stopping potential. The electrons are emitted by this face of the plate. Why are the electrons emitted in the direction of the incident light, and not opposite to it?

I have read a little about photons (the key words being, a little), and from what i gather, they have an intrinsic momentum $p=h/\lambda$, which is transferred entirely to the particle that absorbs it (along with the energy $h\nu$). This should imply that the electrons try to move further into the cathode, and not escape it! What is the fault in the reasoning?

Your reasoning is quite correct, and you can see exactly this phenomenon in a photomultiplier tube. The photomutiplier tube uses very thin metal sheets, and when a photon strikes the sheet the primary photoelectron is emitted in the same direction as the incident photon and escapes from the far side of the sheet:

The quantum yield for this process is close to 100% i.e. almost every photon ejects a photoelectron. However the quantum yield in a typical photoelectric experiment is about $10^{-5}$ to $10^{-6}$ i.e. up to a factor of a million times poorer. The reason for this is because the initial photoelectron is emitted travelled down into the body of the metal. For the photoelectron to escape it has to backscatter off other electrons in the metal and ricochet back to the surface without losing so much energy it can no longer escape. This is a very low probability process so the overall quantum yield is very low.

In the experiments for photoelectric emission, the light is incident on one face of the emitting plate, for example the anode, when determining the stopping potential. The electrons are emitted by this face of the plate. Why are the electrons emitted in the direction of the incident light, and not opposite to it?

In this answer the energy momentum balance is solved and one sees that in the photoelectric effect most of the incoming momentum of the incident photon is taken up by the much heavier nucleus. The electrons get detached from the atom, or the lattice where they were bound but their direction will depend on the fields around the material from which they were detached.

So it will depend how one will gather those electrons that the photons detach, which are close to the surface or within it free with very small momentum.

The design of photocathodes is based on the 3-step model. In this approximation, the photoelectron emission is divided in three separate steps: (1) photoabsorption or excitation, (2) transport of excited electrons to the surface, and (3) passage through the surface and escape. To maximize quantum efficiency, attention is given to each one of the steps. Large excitation results from materials with large density of electrons states close to the vacuum level, e.g., high electron density and low photoelectron threshold. The excited electrons may lose energy during transport to the surface and so their flux is attenuated. The attenuation is less for materials where inelastic electron scattering is hindered, like insulators or wide band-gap semiconductors. Finally, a low surface barrier is required for maximum escape.

In the simple experiment for demonstrating the effect, it is easier to attract the electrons on the side of the incoming photons.

Please read up for more detail. This figure shows a simple diagram where the cathode is the element on which the light shines and releases photoelectrons. 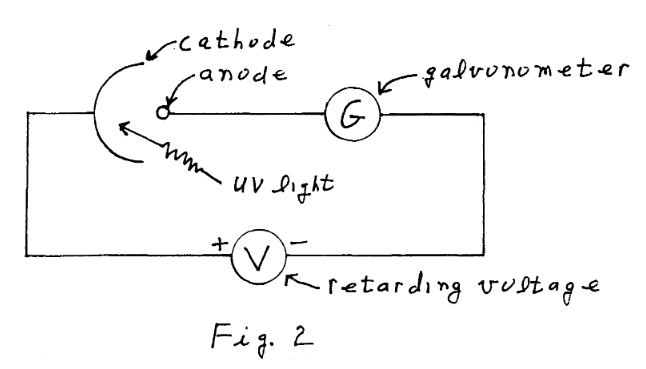 Not the answer you're looking for? Browse other questions tagged photons photoelectric-effect or ask your own question.

3
Relationship between stopping potential and work function
8
What is the relation between photoelectric current and frequency of incident light?
0
Thermionic emission
11
Why do electrons move towards anode in the Photoelectric effect experiment?
1
Does photoelectric work function change with voltage?