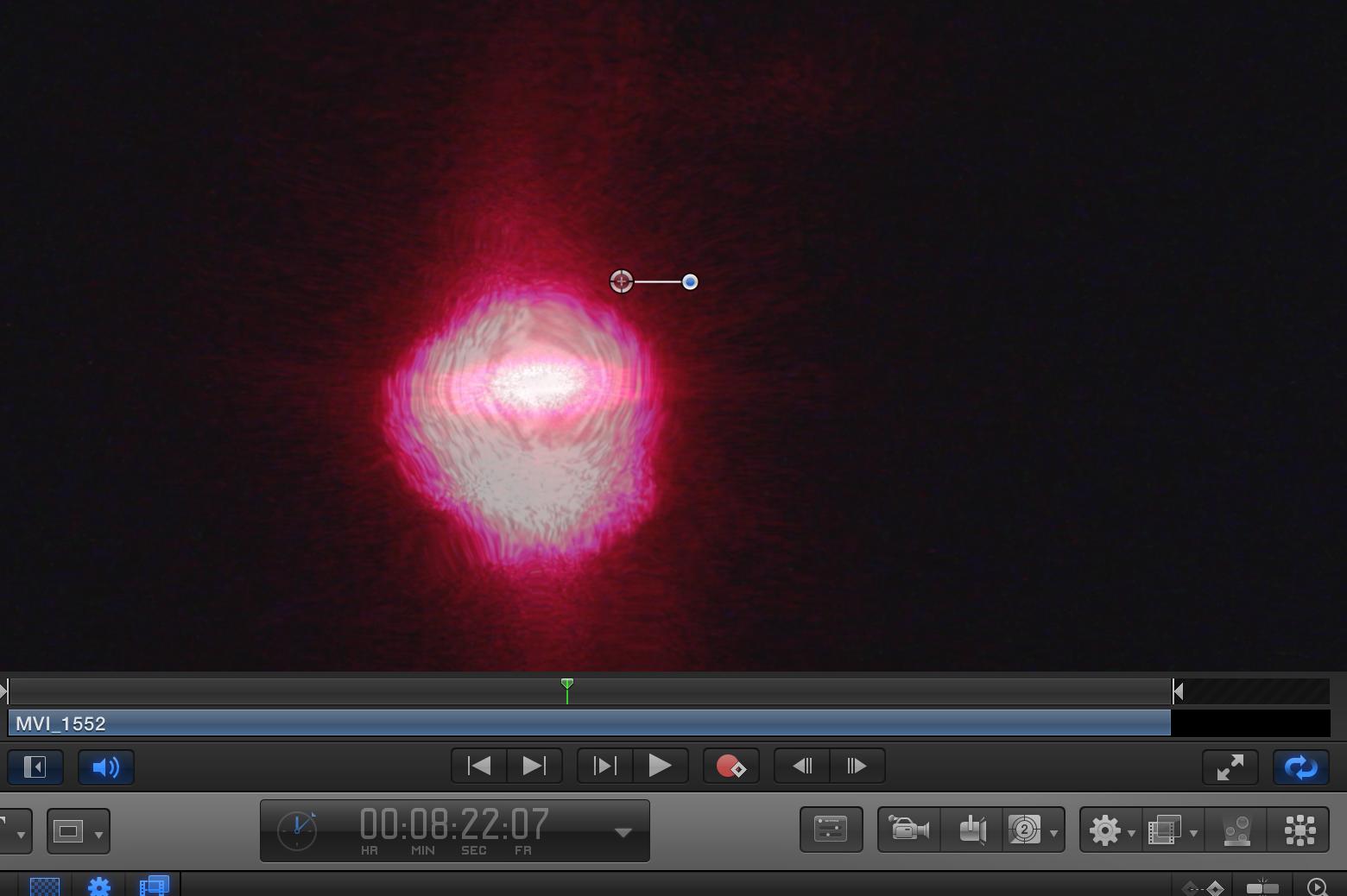 Something really strange happen and I was hoping someone could shine some light on this. I always play around levelers with red lasers. I decided one day to shine a laser through a magnifying glass (projected onto a white wall) and recorded it with a canon 60D at 1920x1080 at 30 fps. I took this footage, put it into Apple Motion editing software and slow it down to 25%. What I saw after the video rendered was really strange. While playing the footage back I noticed the halo of the laser light surrounding the center portion of the laser light was moving like a gas (such as smoke). What was even more weird was that the laser light would flash really quick. When stopping the video play head over the blip the attached picture is what I saw. Everytime it blips is shows a different pattern. I ensure the laser was not affected by vibrations I know this is going to sound crazy but it looks like a wormhole. What is this?

The laser leveler is using a pulsing technology, which is most often associated with distance measurements. The halo is due to scattering of the laser light off of dust particles. The motion you are seeing is that of the dust particles.

If it is laser speckle, as Peter Shor mentioned, the pattern will randomly move, but it is pinned to the wall, where the laser beam strikes: 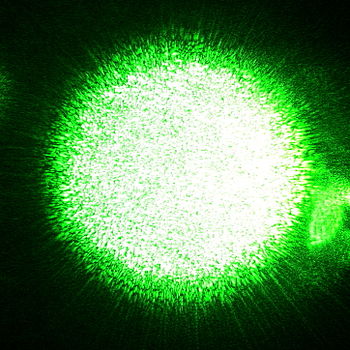 Laser speckle on a digital camera image from a green laser pointer.

Based on your description, scattering from dust seems most likely; as Daniel Sank said, seeing the video would result in a definite diagnosis.

Slow movements in the beam profile of a laser are usually the result of temperature variations inside the laser - it tends to warm up gradually. Temperature changes lead to two effects:

In a laser, thermal drift may be subject to a feedback mechanism. As the laser crystal heats up, it becomes initially more efficient because it was originally aligned at full power. But more efficiency means more power going out and less power is left behind in the laser, counteracting the warming up. In some circumstances, the internal temperature of the laser may oscillate slowly, so that it never stabilizes.

As for the flashing: I didn't catch it on the video clip (not patient enough to sit it all the way out), but it could be an extreme case of temperature instability.

As for the hypothesis of dust blowing through the laser beam path: this would generally lead to much faster fluctuations in the speckle pattern, unless the laser beam travels through tubes with very little air circulation.

Not the answer you're looking for? Browse other questions tagged laser laser-interaction or ask your own question.

4
What determines laser frequency?
4
Soap bubbles in laser light
0
What is laser pumping?
0
Ionizing with 980nm laser
1
Light and laser effects on surfaces. How and why do they cause a material to decay?
4
Measuring higher laser output behind single mode optical fiber than in front of it
0
Is it possible to create a black hole in the lab?
6
Opposing Laser Beams Turns One Laser Off
0
Why does the beam of light fade with the distance from source?